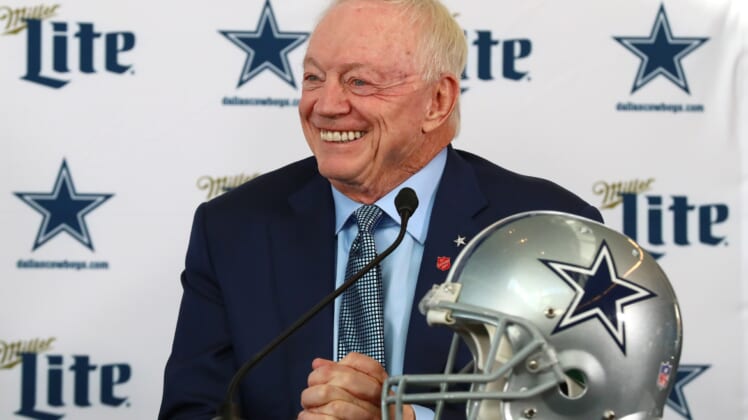 New Dallas Cowboys defensive tackle and multi-time Pro Bowler Gerald McCoy has not been a member of America’s Team for long.

However, the defensive tackle knows full well what the Star means to the rest of the football world. He’s now calling on Cowboys owner Jerry Jones to take action in the midst of the upcoming Juneteenth holiday and ongoing racial division in the United States.

“You have the players, who have their own brand, but we’re all under the umbrella of the Dallas Cowboys,” McCoy said, via ESPN’s Todd Archer. “The Dallas Cowboys are the most recognized franchise in the world. They can get behind it, whether it’s the players or just being in the movement, period, and showing their support. It would be great to hear a statement from the Cowboys, great to hear a statement from Jerry Jones in support of everything that’s going on. Will that get me in trouble saying that? I don’t know, but the truth is it needs to be said. The problem is people are afraid to have the conversations.”

A known supporter of President Donald Trump, Jones has remained surprisingly quiet since the Black Lives Matter protests started following the murder of George Floyd back on May 25.

Sure the Cowboys have released a video supporting the movement and protests geared towards racial equality and ending police brutality. But Mr. Jones has remained quest.

All of this comes after the league pulled a 180 earlier in June, indicating that it now supports Black Lives Matter and the right to protest.

This comes years after the NFL received a ton of backlash regarding the Colin Kaepernick-led national anthem protests. Commissioner Roger Goodell went on record indicating that the NFL mishandled the above-mentioned situation while urging a team to sign Mr. Kaepernick.

The story of 93-year-old Opal Lee and Juneteenth

This is a major backdrop. On the eve of a holiday that celebrates the anniversary of the end of slavery in the United States, McCoy shared the story of Mrs. Lee.

It really is something else. The retired school teacher is pushing for the United States to make Juneteenth a federal holiday. In doing so, she will embark on a on a walk from Texas to D.C. to symbolize the time African-Americans had to wait from President Lincoln signing the Emancipation Proclamation to their freedom in the South following the end of the Civil War. Mrs. Lee will cover 2.5 miles per day.

“I’m so glad she brought awareness to this — that’s why it’s so great, that’s why I’m trying to spread as much about this as possible so this becomes regular on Juneteenth, walk 2.5 miles to commemorate the two and a half years the slaves didn’t know they were free,” McCoy said . “This is something I’m going to continue and be glad to continue. Even when it becomes a national holiday, I’ll do even more then.”

Read all about Mrs. Lee and her story here. It’s amazing.

As it relates to McCoy and the Cowboys, it will be interesting to see if Jones does in fact speak up. If not, he’s going to be in for a rude awakening once national anthem protests take center stage during the 2020 NFL season.