Conor McGregor updated fans on his condition following a gruesome leg injury sustained during his loss to Dustin Poirier on Saturday in UFC 264 in Las Vegas.

“Just out of surgery room. Everything went to plan. Everything went perfect and I’m feeling tremendous. Six weeks on a crutch and we begin to build back,” McGregor said late Sunday night during a 59-second video posted on Twitter.

“… Onwards and upwards we go. We dust ourselves off. We build ourselves back and we come back better than ever. Let’s go team.”

Onwards and upwards we go ?? pic.twitter.com/qKgochlT3t

Audie A. Attar, McGregor’s agent, went into additional detail in his statement on Twitter. 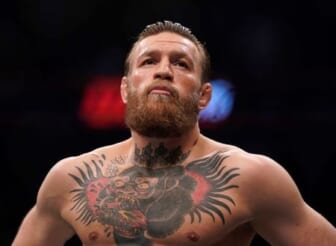 “Conor is in recovery after 3 hours of surgery. The surgery was successful repairing fractures of his tibia and fibula,” Attar wrote. “His physicians included Dr. Neal ElAttrache from (Kerlan-Jobe), Conor’s long time orthopedist, and trauma surgeon Dr. Milton Little from Cedars-Sinai. Both doctors are confident that with time he will make a full recovery. We anticipate his return to the octagon.”

Ireland’s McGregor (22-6) missed on a punch in the closing seconds of the opening round of their UFC 264 lightweight main event at T-Mobile Arena, then appeared to break his left ankle as it rolled while he backpedaled away.

The ringside doctor stopped the fight. It goes into the books as a TKO at 5:00 in favor of Poirier (28-6), who took the last two fights out of their three.

McGregor had to leave the arena on a stretcher. Even so, he doesn’t appear to ready to be done with Poirier.

“You know, Dustin, you can celebrate that illegitimate win all you want, but you’ve done nothing in there. That second round would have shown all,” McGregor said in the video.

McGregor knocked out Poirier in under two minutes at UFC 178 in 2014, however the latter stopped the former at UFC 257 in January via second-round TKO.