During the 1983-84 season, the Pittsburgh Penguins were a trainwreck, finishing last in the NHL standings with a 16-58-6 record. That finish entitled them to the first overall pick in the 1984 Entry Draft.

There are still some conspiracy theories that the organization purposely tanked down the stretch to end up at the bottom for the chance to select junior phenom Mario Lemieux.

Any franchise would have been fortunate enough to acquire Lemieux since his presence in the lineup would alter the direction of any team. Statistically, during his final season in the Quebec Major Junior Hockey League, at age 19, he tore the record book apart with 272 points in 70 games.

Comparably, the Edmonton Oilers found their generational talent, like Lemieux, when they selected Connor McDavid in the 2015 Entry Draft. Since joining the league, McDavid has set the hockey world on fire with highlight-reel goals while scoring 100 points in five of his first eight seasons. Additionally, he’s won nine awards already, including two league MVP awards.

Similarly, both players joined struggling franchises during their NHL debuts. Moreover, despite playing in cities starving for championships, they only found individual success in the first chapter of their legendary careers. Still, it took Lemieux seven seasons to win the Stanley Cup, even though he spent that time challenging Wayne Gretzky for the scoring title every year.

Currently, McDavid doesn’t have The Great One blocking his spot at the top, so his team is the only thing preventing him from growing his legacy. Furthermore, many people wondered when Lemieux would win the game’s ultimate prize, just like they discuss what it would take for McDavid to reach the pinnacle of the sport.

The Lemieux and McDavid stories are eerily similar; however, the Penguins eventually constructed championship-caliber rosters to assist Lemieux in pursuing the Cup. Meanwhile, the Oilers continue to struggle to contend with today’s best player in the lineup. 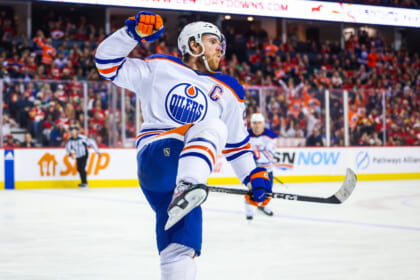 Lemieux scored in his NHL debut on his first shot on his first shift, deking out future Hall of Famer Ray Bourque in the process. After his first-game heroics, he finished the season with 100 points to walk away with the Calder Trophy in a preview of mesmerizing things to come.

Although Gretzky owned the 1980s with four 200-point campaigns, four Stanley Cup titles, and eight Art Ross wins, Lemieux was right there pushing The Great One to the limit. Historically, Gretzky is the only player to surpass 200 points in a regular season. Still, Lemieux finished the 1988-89 season with 199 points to win his second consecutive scoring title, preventing Gretzky from sweeping the decade.

Despite Lemieux’s unworldly production during the regular season, the Penguins only qualified for the playoffs in 1988-89, losing the Divisional Finals in seven games to their cross-state rivals, the Philadelphia Flyers. Unfortunately, the team followed up their first postseason appearance with Lemieux by finishing second to last in the division to miss the 1990 playoffs for the fifth time in six seasons with their superstar. Nevertheless, changes ensued, and the Penguins would soon be sitting atop the hockey world.

Sensing an urgency to produce a winner with Lemieux in the lineup, the Penguins slowly began to piece together a winning roster back in 1987 with the acquisition of future Hall of Famer Paul Coffey. Additionally, emphasizing building from the back end, the team soon acquired Tom Barrasso, a former Calder and Vezina Trophy winner with the Buffalo Sabres.

Still not content with the results, Penguins management traded for a couple of Stanley Cup winners, Joe Mullen and Bryan Trottier bringing invaluable experience to the dressing room. Despite the influx of experience in the lineup, the team added depth to their defense, acquiring future Hall of Famer Larry Murphy.

On the verge of greatness, the final pieces came together at the trade deadline in 1991, with Ron Francis, Grant Jennings, and Ulf Samuelsson joining the squad. Ultimately, Samuelsson was the sandpaper the team needed in tough playoff battles, while Francis provided leadership and finesse.

Together, the Penguins dominated in the 1991 and 1992 playoffs to win the franchise’s first two Stanley Cup titles. Despite all his injuries and health concerns, Lemieux won the Conn Smythe Trophy on both occasions to build upon his Hall of Fame career.

On top of winning some championships, Lemieux did not stop scoring at historical paces, reaching 160 points in 1992-93 in only 60 games after missing some time to complete his Hodgkin’s cancer treatments. Then, in one of his final acts, he potted 161 points in 70 games in 1995-96 before reaching 122 points in his last season, 1996-97.

Overall, the Pittsburgh Penguins were one of the best teams of the 1990s because they had a dominant roster. Consequently, Lemieux put fear in opponents anytime he stepped onto the ice, just like McDavid does anytime he picks up speed in the neutral zone with the puck on his stick.

Related: Did they get it right? Six questionable NHL All-Star Game selections

The curious case of the Edmonton Oilers, 2010 to today

After bottoming out in the late 2000s, the Oilers won the draft lottery in consecutive seasons, selecting Taylor Hall and Ryan Nugent-Hopkins in 2010 and 2011, respectively. Despite employing a roster of young stars, including Jordan Eberle, the team struggled, earning their third straight first-overall pick in 2012.

Although Nail Yakupov didn’t pan out, along with a handful of other prospects, the team struck gold in 2014 with the third overall pick when they landed Leon Draisaitl, their current co-captain, and McDavid’s wingman. However, the Oilers underperformed and won the draft lottery again, securing the chance to pick McDavid first overall in 2015.

Considering the plethora of talent the Oilers have had, it is shocking that the team has only qualified for the playoffs three times thus far into McDavid’s eight seasons. Still, the Oilers’ current captain came as advertised, becoming the seventh-highest scorer in NHL history for players younger than 26. Moreover, he’s one of just six players with five 100-point seasons on their resumes.

Oilers have failed to surround Connor McDavid with talent

Goaltending has been an issue for the Oilers since Bill Ranford left the franchise in 1996. Yes, there were some solid years from Tommy Salo and then Dwayne Roloson. Still, even with former Stanley Cup winner Nikolai Khabibulin, the team has been unsuccessful in recruiting and developing top goalies.

Consequently, after Mike Smith led the team to the Western Conference Final in 2021-22, he stepped away, allowing rookie Stuart Skinner and free agent acquisition Jack Campbell to split the starting duties. However, thus far in 2022-23, the tandem has given up the 11th most goals and has the 13th highest goals-against average in the league.

A focal point of fans’ anger today is the Oilers employ one of the league’s most questionable defensive corps, with Darnell Nurse at the forefront of the discussion since the rearguard is making 9.5 million a year. Although there aren’t a lot of bonafide stars on the back end, the team is focused on a run-and-gun style of hockey, hoping to outscore their opponents by the final buzzer thanks to a lethal power play.

Ultimately, at this point, the Oilers’ crowning acquisition during McDavid’s tenure is probably Zack Hyman, who has now scored 20 goals in two seasons with the Oilers. Moreover, the team acquired controversial forward Evander Kane last season to bring some grit to the lineup; however, he hasn’t played an entire campaign with the club due to injuries.

Although the Oilers and Penguins’ rosters compared above operate in different eras, they share a common goal: getting their superstar a ring. Consequently, the Oilers need to do more to get McDavid the support he needs to contend for the Stanley Cup. Now in the middle of his eighth season, he’s on pace to become the first player since Lemieux to score more than 150 points, but the Oilers are a fringe playoff team at best.

The team needs more resources to go on an extended playoff run (again) after advancing to the final four last year. Still, no players on their active roster have won a Stanley Cup ring. Moreover, only McDavid and Draisaitl have won NHL awards. Comparably, the Penguins realized three decades ago that it takes a carefully selected roster to find success.

There are very few comparisons in hockey history; however, it is fair to pair McDavid and Lemieux together at this stage of their careers. Both players have unearthly talents and the hunger to win it all, yet they suffer(ed) because of the supporting pieces. Overall, until McDavid hoists the Stanley Cup, many will wonder about his true greatness, just like they did for Le Magnifique many years ago.