The Philadelphia 76ers and Portland Trail Blazers must know that they could go a long way toward improving their teams by pulling off a trade that sends Damian Lillard to Philly and Ben Simmons to Portland.

However, the 76ers’ Simmons asking price is reportedly very high, and it’s not like the Blazers would be comfortable with a one-for-one swap, especially with Simmons coming off a disastrous playoff performance. That’s why they need a third team, like the Cleveland Cavaliers, to help facilitate a trade that’d go down in NBA history as one of the biggest.

You’d think the Cavs would want no part of this if they can’t have Lillard or Simmons, and given Cleveland’s rather obvious dysfunction when LeBron James hasn’t been on the team, it’s not like either superstar player would eye the Cavs as a preferred destination.

It might sound crazy, but the fact that Cleveland is somewhat rudderless due to the status of multiple key players actually works to their advantage — and benefits the Blazers and Sixers if the sides can agree to a landmark deal.

See where the Cavs, Blazers and Sixers stack up in our NBA power rankings

With two years remaining on his contract, Kevin Love obviously wants to go to a better franchise. He was left behind by LeBron and Kyrie Irving, and hasn’t been the type of leader the Cavs have needed to mount any sort of momentum to turn the corner in the Eastern Conference.

This isn’t really Love’s fault. He sacrificed a lot of individual clout to go to Cleveland in the first place, and won a championship. It wasn’t all for naught. The basis for his leaving the Minnesota Timberwolves was their failure in managing the roster. Unfortunately, he’s dealt with much of the same for years now. 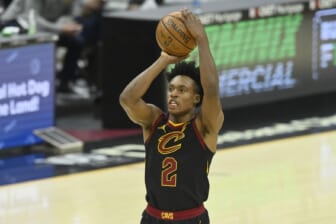 Love is the type of veteran who could really thrive with a change of scenery. We’ve seen the double-double machine he can be, and how well he spaces the floor as a 3-point shooter. His outlet passes are phenomenal, too. You’re not going to find that skill set many places.

Also, Cavs guard Collin Sexton is coming off a sensational season in which he averaged 24.3 points per game. Sexton has tons of defensive upside as well, yet he’s been floated in trade rumors all summer, as Cleveland seems reluctant to give him a max contract.

On his current trajectory at just 22 years old, and with a max payday still not on the books, Sexton is a great piece to deal away.

Tons of uncertainty in Portland right now, namely about whether hiring Chauncey Billups as head coach will be enough to elevate the Blazers higher in the West.

The biggest problem is defense, which Billups was known for as a player but is completely unproven in coaching up. Lillard and CJ McCollum expend so much energy on offense and aren’t known for shutting down their adversaries.

Dealing Lillard and McCollum away might feel like a crazy thing to do, until you realize that, if McCollum, a Canton, Ohio native, were to go back home, Portland could get enough assets to address its shortcomings in that deal without worrying so much about the compensation from Philadelphia.

Click here for our NBA playoff predictions, including who we think will win the 2022 Finals

Sixers GM Daryl Morey is intentionally trying to inflate the market for Simmons. Both sides have no intention of continuing their union, so the compensation is going to come crashing down if Morey isn’t very careful.

Lillard’s trainer, Phil Beckner, was just hired by Philadelphia. Beckner’s time with Lillard dates back to the latter’s college days at Weber State. it’s no secret that Morey badly wants to trade for Lillard, who fits with his analytics-style approach to modern basketball — namely elite offense and perimeter shooting.

If it costs a few first-round picks and Simmons — a player they don’t want anyway — to pry Lillard from Portland, then the Sixers would be crazy not to pull the trigger on that deal. They have a few promising young guards they could kick into the package as well, such as Shake Milton or Tyrese Maxey.

It feels like there’s a defined ceiling in terms of how far Lillard and McCollum can carry the Blazers. At least as the roster stands right now, that’s not to a championship level.

Instead of staying locked in to Lillard and McCollum for the foreseeable future, this is the perfect opportunity for Portland to pivot and cash in big time.

Leveraging both their star guards for a treasure trove of draft assets is just the tip of the iceberg. The Blazers will already have Jusuf Nurkic and Robert Covington on expiring contracts this season, and if they were to acquire Love from Cleveland, his contract would make him an ideal trade chip next summer, or at the NBA trade deadline. 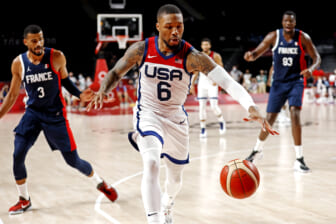 Billups also said recently, per NBA Central on Twitter, “I’m not one of those coaches that wants to shoot all threes and get up 50 threes. I don’t believe in that.”

Moving away from a Lillard-McCollum duo in favor of, say, a rim slasher like Simmons and another potential lead guard from the Cavs in Sexton seems like the best of both worlds.

Now we bring the big picture into focus.

Despite trading their beloved backcourt, the Blazers actually make out really well here. Milton is an instant spark off the bench who provides great depth, and Simmons instantly transforms Portland’s woeful defense.

As for Sexton’s fit with Simmons, he’s accustomed to playing on and off the ball alongside Darius Garland on the Cavs. There’s a lot of lineup flexibility there, depending on how the Blazers would ultimately want to deploy Simmons.

Love’s versatility also makes him an attractive trade candidate for Portland. If Billups wants him to revert to banging inside, crashing the glass and getting more physical, he can do that. 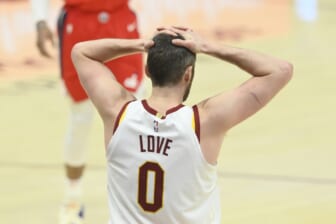 The Blazers could get really creative thanks to Love’s ability to stretch the floor. Having high-IQ, sizable passers like Love and Simmons on the court at the same time would add all kinds of new dimensions to Portland’s offense.

Sexton or Love can also be leveraged and flipped in future trades. And again, any of those five first-round picks could be a big hit.

If Cleveland has to give up a couple first-rounders — maybe with some protections on the picks for safety — it’d still have a core of Garland, McCollum, Evan Mobley, Jarrett Allen and Isaac Okoro, with Ricky Rubio in the fold for 2021-22 as a veteran mentor. That isn’t bad at all, especially considering where the Cavs have been in recent years.

Then of course, Philadelphia and Morey get the elite offensive catalyst they’re pining for in Lillard, and can’t feel that bad about sacrificing some picks in the process. Lillard is just a better player, and if Morey wants him, he’s going to have to give up Simmons plus other assets in order to get Dame.