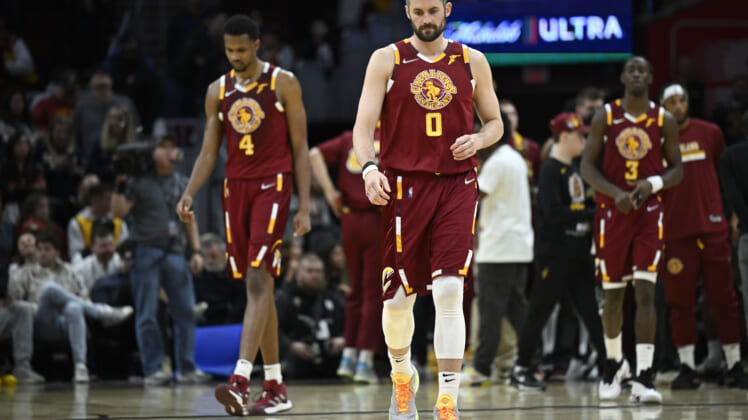 It’s an exciting time to be a Cleveland Cavaliers fan again. They have a young core built around Darius Garland, Evan Mobley, and Jarrett Allen that just saw a 22-win improvement over the previous year. It ended with a visit to the play-in tournament, which is a win in itself. Losing to the Hawks is a tough loss, they could have won, but their 2021-22 season has to be considered a major victory. Now they have the opportunity to build off a strong season in which their youth should improve drastically from within, but here are still a few moves they could make.

Here are four offseason moves the Cavaliers could consider over the next few months.

The Cavaliers already have 10 players under contract for the 2022-23 season, they also have their own draft pick, which has the 14th best (or the worst) draft lottery odds. As far as cap space, they won’t have much to work with, with -$24.04 million in cap room to work with. This means most improvements will have to come from within, or via trade. One way to open up salary is by trading Kevin Love.

Shedding his salary could open up the potential to add two middle-cost bench pieces or possibly even a bigger name who could make an impact as a starter or as a top contributor off the bench. Love has his own skillsets, with his three-point range, rebounding abilities, and excellent passing vision, but his salary is too much for what he contributes on the floor at this stage in his career.

Collin Sexton’s season came to an early end, after just 11 games he was ruled out for the season after suffering a left meniscus tear. Yet, the Cavaliers still had their best season since King James left town. This indicates they can win without Sexton, it just might entice the front office to see what trade offers he can bring in as he enters the last year of his contract.

A 24 PPG scorer who’s still just 23-years-old, Sexton should be able to bring back a very valuable trade chip. Whether it’s another lottery selection, or whether the Cavs wish to package their existing lotto pick plus Sexton to bring back an even greater piece is up to them. It’s safe to say, Sexton has passed the torch on to Darius Garland and Evan Mobley.

Acquire another ball-handler to take pressure off Garland

One area the Cavaliers need to address is finding another offensive option that can help space the floor while mixing in among the towering lineup featuring Mobley, Allen, and Lauri Markkanen. Garland is talented in his own right, but they need someone who can spell, and at times play next to him.

They brought in Ricky Rubio who fit in nicely before suffering a season-ending injury of his own, but they traded him at the deadline and since acquired Rajon Rondo, who’s headed for free agency. Even signing a player such as Kemba Walker in free agency after clearing some salary could work wonders for this second unit off the bench.

There are several other examples throughout the league who could be had via trade. Chances are, the Cavaliers have already assembled a list of candidates whom they’d like to acquire.

Is LeBron James still the alpha who can lead a roster without stars to an NBA Finals appearance? No, we’ve seen that over the past few years. But can he still dominate from time to time and be one of the best players on the court? Absolutely. Anyone saying otherwise hasn’t seen him play.

In the right role, with the right roster around him, James can return to being that beloved superstar the league initially adored back in 2003. Trading for him might not break the bank, as we know it’s all about matching salaries in the NBA, but the Lakers are going to need some major assets for their troubles. For them, the headline is that they traded LeBron James, so it needs to look good on paper too.

Maybe James could be had for the Cavs’ first-round selection, Collin Sexton, Kevin Love along with future first-round picks? Is that a trade the Lakers would be intrigued by? It’s tough to say, but it would give them a chance to add youth to an aging roster, while giving them a chance to sign bigger free agents once Love’s contract comes off the books at the end of next season. If LeBron basically demands to go to Cleveland, they might not have much of a choice.