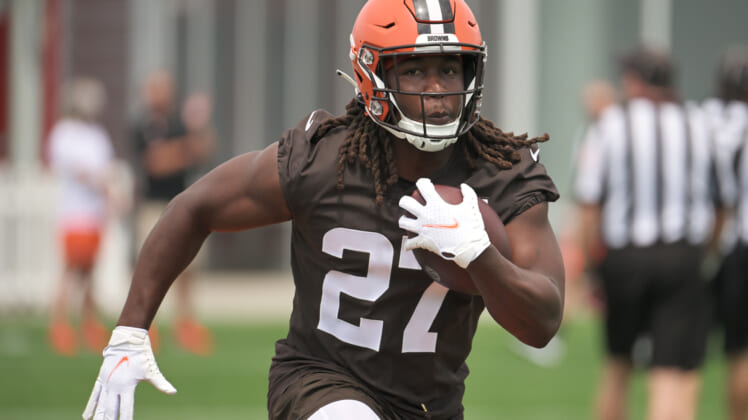 Cleveland Browns running back Kareem Hunt is the newest NFL player that is holding in at training camp instead of holding out. However, he may not have quite the same leverage to get a new lucrative contract as some other players this summer.

Holding out of camp has become a classic strategy for NFL players dissatisfied with their current pay rate. For Superstar players and Pro Bowlers, the tactic can often work but it can also be detrimental to performance and locker room relationships.

However, in 2022 several athletes have decided to hold in at their team’s training camp. Instead of being away from teammates and viewed as malcontent, they are at camp but only contributing on a limited basis, or not at all. The strategy worked recently for wide receiver Deebo Samuel and Diontae Johnson, as both landed new long-term deals in the last couple of weeks.

Browns’ three-year veteran Kareem Hunt has reportedly put a twist on the 2022 hold in technique, and after taking part in team practices over the opening weeks of training camp, he has now decided to be a limited contributor going forward as he seeks out a better contract.

On Saturday, CBS Sports NFL insider Josina Anderson reported that Hunt is not interested in taking part in team drills going forward until he gets a pay raise.

Anderson added a league source informed her that Friday was the first time Hunt did not compete in team drills. “I’ve been told several times Hunt periodically has said to members of the team informally –he wants to get paid or traded. However, one source emphasized they believe Hunt would like to stay in Cleveland.”

In 2020, Hunt signed a two-year extension with Cleveland worth $12 million (via Spotrac). He is set to make $1.35 million as a base salary this season. 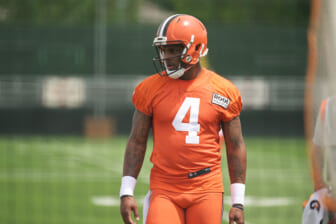 Hunt does not have much leverage in this situation. After earning Pro Bowl honors in his rookie season with the Kansas City Chiefs he has had difficulties staying healthy, including missing nine games in 2021 because of ankle and calf injuries. His best season in Cleveland came two years ago when he rushed for 841 yards and six touchdowns. Beyond that, he has only managed to play in 16 games over his two other years with the Browns.

In further proof of that fact, after holding out of team drills for a second day the Cleveland Plain-Dealer reported that the team “planned to let him play out the season and then revisit the expiring contract afterward,” and they are likely to fine him for missing team drills.