The Diontae Johnson hold-in is officially over after he and the Pittsburgh Steelers came to terms on a new two-year deal that will guarantee him $27 million.

One of the big stories to start the Steelers’ 2022 training camp was of four-year man Diontae Johnson being openly unhappy with having just one season left on his current bargain contract. However, the 26-year-old didn’t go with the classic strategy of holding out from camp. Instead, he went with the new trend of holding in. Which pretty much means being in attendance but still doing nothing of relevance.

Well, that plan worked for San Francisco 49ers star wideout Deebo Samuel and now has seemingly bared fruit for the 2019 third-round pick. On Thursday, NFL Network insider Mike Garafolo broke the news that the schism between the two sides was over and Johnson would be staying in Pittsburgh for at least another two seasons.

It really does seem like there is no better time than now to be a wide receiver looking for a major payday. A historic amount of money was given out this offseason to top-shelf pass catchers. Tyreek Hill, Davante Adams, Deebo Samuel, Cooper Cupp, AJ Brown, and Terry McLaurin all landed lucrative long-term deals. Johnson took advantage of that popular trend.

Nevertheless, the Steelers needed to bring back their #1 receiver. Even if they have to revisit this issue in 2024 and pony up even more money. Johnson is a former third-round selection that has far exceeded expectations and is only getting better after making his first Pro-Bowl in 2021. Not to mention he nearly racked up 1,200 yards receiving and had a team-leading eight touchdowns last season. 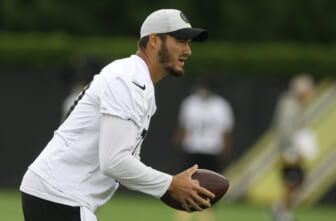 With the Steelers in a new era at quarterback following Ben Roethlisberger’s retirement, if the likes of free agent Mitchell Trubisky or rookie Kenny Pickett have any chance of success in 2022, Johnson needed to be on the field and happy. The Steelers improved their prospects of a strong season with this contract extension.