Chargers-Raiders rivalry to be on full display for season finale 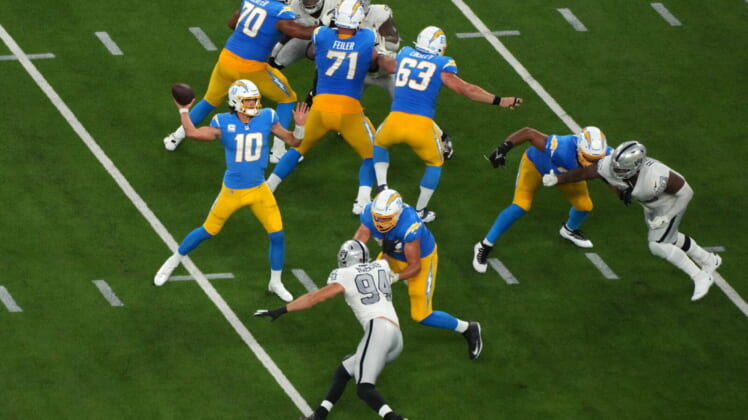 The Silver and Black.

The Blue and Yellow.

Two teams that have matched up since 1960, which was the American Football League’s inaugural season and six years prior to the AFL-NFL merger.

Over the last 62 seasons, 123 games have been played between the two squads with the Raiders owning a 65-56-2 record.

The past seven games have been close, with all four matchups in 2019 and 2020 ending a one-possession games.

During the first matchup in 2019, then-rookie running back Josh Jacobs scored an 18-yard rushing touchdown with 1:02 remaining to win a nail-biting 26-24 victory in Oakland.

About two months later, these two teams squared off again in Los Angeles and quarterback Derek Carr threw a 56-yard touchdown pass to wide receiver Hunter Renfrow to opening the scoring and kicker Daniel Carlson scored a 48-yard field goal to get a 10-point lead, enroute to a 24-17 win and a season series sweep for the Raiders.

The first game between the Chargers and Raiders inside SoFi Stadium last season came down to the final play and replay review. Los Angeles quarterback Justin Herbert initially threw a 4-yard touchdown pass to tight end Donald Parham Jr. But after review, Parham did not have a full control of the ball as he came to the ground as the Raiders grew its winning streak to three over the Bolts.

The final matchup of 2020 between the two teams saw backup quarterback Marcus Mariota make an appearance in a quarterback matchup of two former Oregon Ducks after Carr injured his groin in the first quarter. The game once again came down to the wire as regulation time was not enough.

In overtime, Carlson kicked a chip shot 23-yard field goal, but on the ensuing drive, the Chargers got down to the 1-yard line and on the second attempt, Herbert sneaked in for the game winner.

When these two teams squared off a few months ago, the Raiders went into SoFi Stadium with its best start to the season since 2002, winning its first three games, which included two overtime victories. However, the Chargers jumped out to a 21-0 lead after two quarters as the Raiders could not keep up, despite trying to make a comeback with two touchdowns in the third quarter, en route to a 28-14 loss. 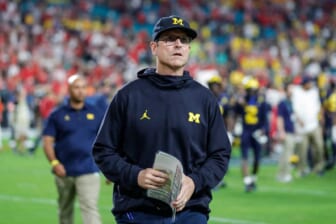 Now, under the lights in primetime, the Raiders (9-7) are hosting the Chargers (9-7) for Sunday Night Football. This game will not only to close out the regular season, but a spot in the playoffs is on the line.

“It’s a division game and it’s at our place,” Bisaccia said. “They have really good players. The quarterback is an outstanding player, (Joey) Bosa is an outstanding player. They have a tremendous running back. Their secondary has gotten healthy. They went and got (wide reciever) Andre Roberts. Their kicking game has improved. They had a 100-yard kickoff return and another big return last week. So, we’re playing a really good football team and we’re excited about playing them at home.”

If the Raiders win and enter the postseason tournament, they will start on the road.

As a result, Carr said he can’t wait for the Raiders faithful to pack in Allegiant Stadium with the season on the line for home-field advantage.

“I think it’ll be exciting,” Carr said. “It’ll be loud. It’s basically our playoff game for our fans. What an exciting time for the last game of the season to mean so much for our city and for our organization. To think about where we’ve come from, to see where we’re at today, with a chance against a really good football team, it’s exciting. And hopefully, it’s a loud atmosphere.