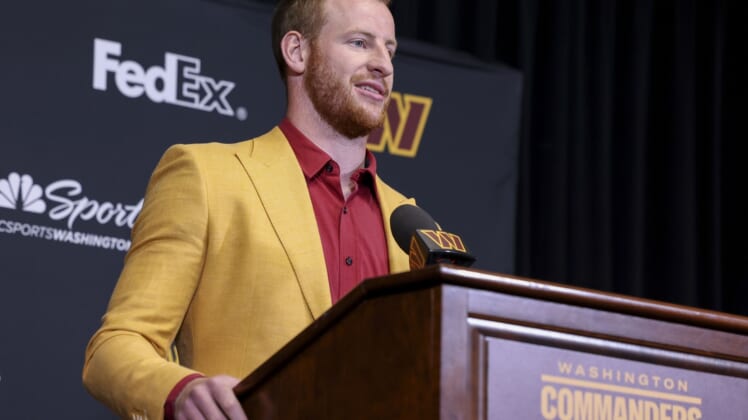 Carson Wentz spiced up his second introductory press conference in as many offseasons on Thursday by wearing a gold sports coat and burgundy shirt.

And while those colors are embraced by the newly branded Washington Commanders, Wentz still was roasted over social media for the outfit.

Wentz has heard his fair share of catcalls of late after his lone season with the Indianapolis Colts ended with a thud. Now, he’s looking forward.

“It’s kind of stepping into something new… stepping into the Commanders, stepping into this new kind of era, it’s exciting,” Wentz said on Thursday. “It’s definitely given me a clear vision of where this organization wants to go and hopefully I can help get there.”

Speaking of change, Wentz is making a familiar one. He will don his familiar No. 11, the jersey number he had while playing with the Philadelphia Eagles to begin his NFL career.

He said the number feels right. As for what went wrong with the Colts, Wentz wasn’t ready to travel down that path.

“Reports are reports. There are truth in some things,” Wentz said. “But if we try to combat every report, we run out of things to say. I just try to be myself.”

Wentz was acquired by Washington along with a second- and seventh-round pick in the 2022 NFL Draft from Indianapolis in exchange for a second-, a third- and a conditional-round selection in the same draft.

Wentz went 9-8 with the Colts, including a loss in the regular-season finale at Jacksonville that took Indianapolis out of the playoffs. He passed for 3,563 yards with 27 touchdowns and seven interceptions.

“It was a year with highs and lows, ups and downs,” Wentz said. “The way we finished, the way I finished was poor… I didn’t play good enough.”

Wentz, 29, was the second overall pick by the Eagles in the 2016 NFL Draft and performed at near MVP levels as a second-team All-Pro pick in 2017. But a knee injury kept him out of the playoffs that season and Wentz watched as Nick Foles guided the Eagles to a Super Bowl LII championship.

Wentz has thrown for 20,374 yards and 140 touchdowns with 57 interceptions in 85 career games with the Eagles and Colts.