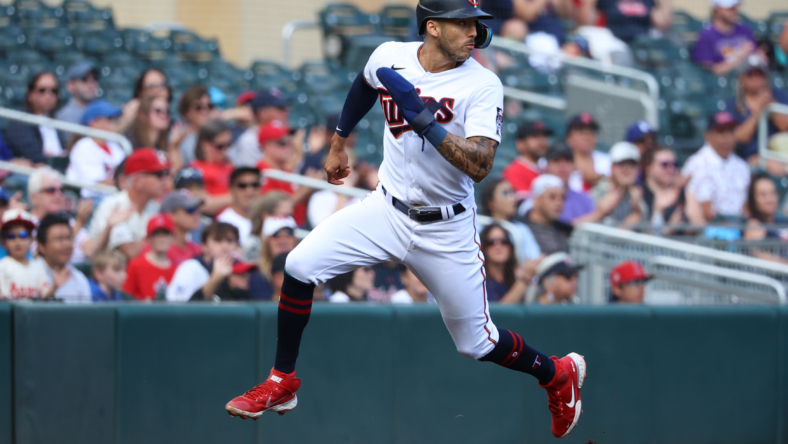 From the moment Carlos Correa shockingly signed with the Minnesota Twins in the wee hours of the night just days ahead of the MLB season opener, many felt something was off. Then, details of the contract emerged, revealing the superstar shortstop had opt-outs after each season of his three-year, $105 million contract.

These player options available to Correa only led to further speculation that he wasn’t long for the Twin Cities, despite saying the right things to endear himself to the fanbase all along.

Well, now that the Twins have experienced an injury-riddled second-half collapse, losing 41.9% of their games after previously winning 53.2% pre-All-Star break, is Correa thinking of ditching town?

He recently spoke about his upcoming decision on whether he’ll be accepting or declining his $35.1 million player option for the 2023 season. If he declines, Correa will enter the 2023 free agent market, and the Twins will have to essentially shop for his services once again. That’s exactly what Correa alludes to.

While the Gold Glove shortstop has previously been non-committal about his future, that statement makes his intentions sound fairly clear.

Meanwhile, earlier in the week Correa also suggested he wasn’t done with Minnesota, as he’d like to remain with the ballclub. He simply wants a long-term contract.

​​“I want a long-term relationship with someone. I want to get married. I don’t want to just be dating and going on one-night stands. I want to marry an organization. If they see me the same way, and see me as the perfect fit, then they’ll make it happen,” said Correa.

Correa has made the playoffs in all but one of his eight seasons in MLB but is now set to watch the World Series from his couch once again. By all appearances, he wants to shop around for the best opportunity to get back into the Hunt for October.

Carlos Correa wasn’t his best, but he’s not the reason the Twins failed

Few anticipated the Twins to compete for a postseason spot when the season began. But once Correa signed, the plan was in motion. The front office duo of Derek Falvey and Thad Levine worked feverishly to bring in other parts to fill out the pitching staff, but it didn’t matter. Injuries to Byron Buxton, causing the heart and soul of the team to play in just 92 games, were a season-long deterrent. Having pitcher after pitcher go down with injury didn’t help either.

Dylan Bundy has been the team’s most reliable arm (not best), making 28 starts, but it’s rookie Joe Ryan who’s pitched the most innings with 141. In total, they’ve had 13 different pitchers make a start. Four are out for the season with injuries.

It’s true, Correa may have started slow, and he didn’t produce as many runs as he has in the past, but he otherwise finished with a stellar season in line with his career averages. He simply played his role, the same as he always has.

No matter what Correa decides, he’s been a class act within the clubhouse and appears to be a true team player to its young ballplayers looking to improve. If he opts out, nobody should view him as a traitor or someone to be booed.

Getting the chance to have even a season of a premier shortstop gave the Twins’ pitching a much better chance without having an ace on the staff. The start of next season should be much different, as long as the injury bug doesn’t bite once again.

But unfortunately, they may no longer have a two-time All-Star and former Platinum Glove-winning shortstop to help boost the staff. Interim options to potentially replace Correa should he leave as a free agent would typically start with former No. 1 overall pick Royce Lewis, but his ACL tear in May will also knock him out for the start of next season. Other options could include Nick Gordon, who’s had a breakout season, or the 2020 fifth overall pick Austin Martin, who’s seen over 800 plate appearances at the Double-A level, but any ascension to the major leagues would be a big leap. Jermaine Palacios also has some experience after seeing 64 plate appearances in his rookie debut this season.

Of course, it’s possible Minnesota’s 2023 opening day shortstop isn’t even on the roster. As we’ve seen, the Twins’ front office isn’t afraid to make moves, and if a player like Correa becomes available again, you can be sure other names hit the block.