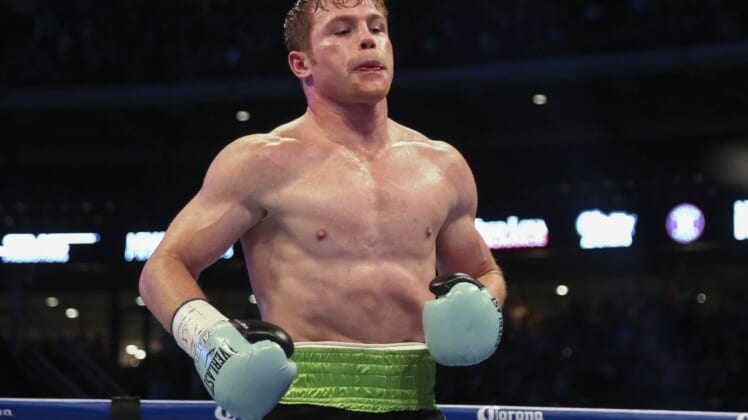 May 9, 2015; Houston, TX, USA; Canelo Alvarez goes to his corner after a knock down during a super welterweight bout against James Kirkland (not pictured) at Minute Maid Park. Alvarez defeated Kirkland with a knockout in the third round. Mandatory Credit: Troy Taormina-USA TODAY Sports

Canelo Alvarez won the WBC and WBA Super Middleweight titles in December when he defeated former undefeated champion Callum Smith by unanimous decision. Saturday night saw him defend the titles against mandatory challenger Avni Yildirim, winning by third-round TKO after his opponent’s corner waived off the fight going into the fourth round.

Canelo Alvarez vs Billy Joe Saunders set for May

Meanwhile, Billy Joe Saunders first became a world champion in the middleweight division when he beat Andy Lee to win the WBO Middleweight title in December 2015. After successful title defenses against Artur Akavov, Willie Monroe Jr. and David Lemieux, Saunders went on to take and win a fight at light heavyweight before settling in the super middleweight division.

Saunders has been WBO Super Middleweight champion since May 2019 when he beat Shefat Isufi to win the vacant belt. He has successfully defended the title twice with wins against Marcelo Esteban Coceres and Martin Murray.

This fight is sure to be an excellent tactical match as both men are well renowned for their accurate punching and defensive technique with fluid head and body movement. While Canelo Alvarez will be the betting favorite going into the fight, do not expect this fight to play out like Alvarez’s bout with Avni Yildirim. Billy Joe Saunders is an elite fighter and will surely give Alvarez a run for his money in his quest of becoming undisputed champion.

The fight will be broadcast live on DAZN and be set at the Dallas Cowboys’ home AT&T Stadium.