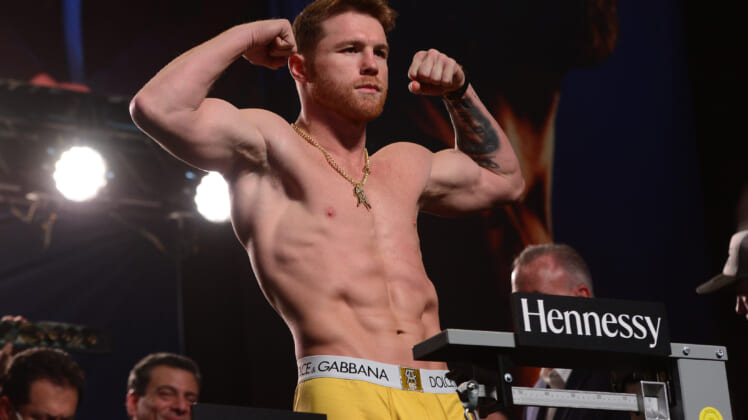 While a super fight between boxing megastar Canelo Alvarez and UFC champion Kamaru Usman is unlikely, after a Wednesday trash talk exchange between the two on Twitter, it doesn’t seem impossible.

Despite “The Nigerian Nightmare” and his manager campaigning for the bout in the months since his second victory over his division rival Colby Covington, Alvarez has shrugged off the speculation and has seemed uninterested in the idea. However, on Wednesday, Usman’s manager Ali Abdelaziz got the attention of the  WBA, WBC, and WBO super-middleweight titlist when he tweeted the Mexican was an “absolute chicken” who is competing against fighters with small followings and is avoiding a matchup with Usman.

The post surprisingly earned a response from Alvarez. However, it was short and to the point. “Who the f**k is this?” he wrote in a tweet, followed by crying-laugh emojis. Usman quickly got involved in the conversation and sarcastically asked Alvarez and Abdelaziz to calm down. “Let’s just all relax… before somebody gets hurt,” he wrote.

The UFC stars bait was gladly accepted by Canelo Alvarez when he followed up by replying to Usman with, “I agree cuz it will not be me.” That opened the door to a longer digital chat as the 34-year-old cage fighter asked his boxing counterpart a question. “In the cage or the ring I’m willing find out in both… Are you?”

At that point, it seems like the boxing star had enough and looked to bring the conversation to a close. “You calling me out right? You want the payday right? So you know where, but sit down it’s not your turn yet I have a legacy to make,” Alvarez wrote.

Of course, Usman was not going to stop there and ended the back in fourth by questioning Alvarez’s guts to actually fight him. “Enough said… you don’t want that smoke in a real fight. I hear you! Good luck champ.”

Kamaru Usman is in the midst of a 19-fight win streak and has yet to taste defeat inside the Octagon. He is currently ranked at No. 1 in our official UFC pound-for-pound rankings. Alvarez fought on the same night as Usman in November. Beating Caleb Plant with an eleventh-round technical knockout.