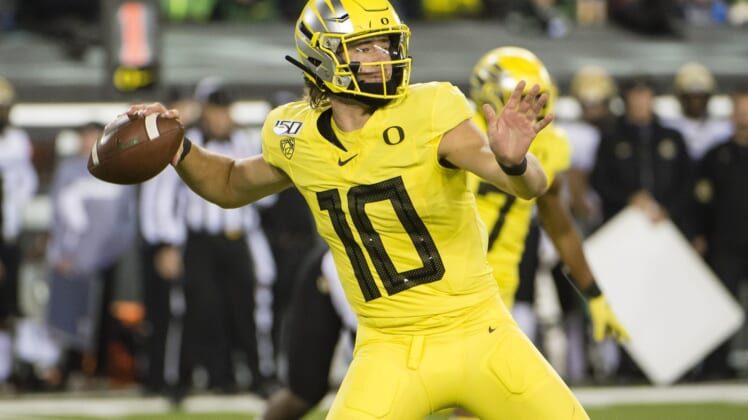 While Week 8 of the college football season won’t offer as many marquee games like last weekend, it’s still going to be a great one for football fans across the country.

It’s going to be a big weekend in the Pac-12 — a conference known for contenders eating each other alive — with two ranked matchups. We’ll also see a few undefeated teams put it all on the line in crucial road games.

It’s a slate of action with conference standings, perfect seasons and even some championship aspirations on the line. Now let’s examine the burning questions that will decide Week 8’s most prominent college football games.

Can Justin Herbert deliver in Seattle against No. 25 Washington?

After a season-opening loss to Auburn, Oregon is rolling with five consecutive victories. Plenty of credit goes to its defense with 25 total points allowed in the wins, but the attention around this program deservedly goes to Herbert. The senior is excelling this year with a 17-1 TD-INT ratio and a 69.1 percent completion rate.

Of course, he won’t face inferior competition this week. Washington’s secondary is holding opponents to 216.9 passing yards per game and Husky Stadium will be shaking with excitement on Saturday. We’ve seen Herbert struggle in these types of atmospheres in the past and he came back to Oregon to answer the doubt. If he overcomes his demons to knock off the Huskies, Oregon becomes a top-10 team.

Will Baylor’s undefeated season survive a trip to Stillwater?

The Bears have experienced their share of scares in recent weeks. This team survived Iowa State and Texas Tech (thanks to a butt-fumble debacle), but a trip to Stillwater and a battle against Oklahoma State is a different beast.

Baylor’s defense got gashed in Week 7 by SaRodorick Thompson for 153 rushing yards. Now it faces Chuba Hubbard, the nation’s leading rusher with 1,094 rushing yards, and the Cowboys’ explosive offense. We know Baylor’s offense can rack up the points, but a 7-0 record only happens if the defense can contain the Cowboys.

Can the Gamecocks pull off another upset?

College football got its biggest upset in 2019 when South Carolina knocked off Georgia. Now the Gamecocks’ fan base will flood Williams-Brice Stadium with hopes of another upset against a top-10 team.

Florida enters as a five-point road favorite and certainly would seem to have a bitter taste in its mouth after last week’s loss. However, this could also be a spot where the Gators get too focused on its upcoming matchup against Georgia and they sleep on the Gamecocks. It could be an exciting offensive showcase for both teams, but South Carolina might need a few more big plays to pull off consecutive shockers.

Does Anthony Russo or Shane Buechele win the shootout in Dallas?

This isn’t a matchup that will draw the national spotlight or be talked about at lunch on Friday. However, Temple’s clash with No. 19 SMU could be captivating for any fans of good quarterbacks and high-scoring games.

Russo’s Owls enters with a 5-1 record and are fresh off a huge win over Memphis. Now after slaying one undefeated team, they’ll have a chance to do it again in Week 8. Buechele is thriving under Sonny Dykes’ coaching and brought SMU back from a 23-point deficit in the fourth quarter to win last week. Both quarterbacks should play very well in this game and it might come down to the final drive.

Can Jayden Daniels overcome No. 13 Utah’s defense in road battle?

Daniels continues to amaze with game-winning plays and plenty of award recognition as a freshman. Now he’ll get to hit the road for an excellent litmus test against the Utes’ secondary that is allowing under 220 passing yards per contest.

Utah enters as a double-digit favorite, which is rather surprising given the Sun Devils’ success this season. It also offers fans the chance to watch outstanding, young talent on both sides. Daniels and running back Eno Benjamin will compete against Utah’s quarterback Tyler Huntley and running back Zack Moss. Both teams deserve their top-20 ranking, but only one will make a top-10 case on Saturday.

Will Michigan’s offense find any rhythm against Penn State’s defense?

Michigan is working hard to sell its offense being back to peak form after three wins, but that confidence could be misplaced. The Wolverines’ offense scored 10 points against Iowa’s defense and scoring 40-plus points on Illinois and Rutgers means nothing.

If Michigan wants to be seen as a legitimate contender, it must show up against Penn State. Of course, Penn State’s defense allows the second-fewest points per game (8.2) and the third-fewest rushing yards (53.8). Shea Patterson completed 28-of-58 passes for 366 yards with a 2-2 TD-INT ratio against Wisconsin and Iowa. If he stays at that level this week, Michigan’s offense will get mauled by the Nittany Lions.