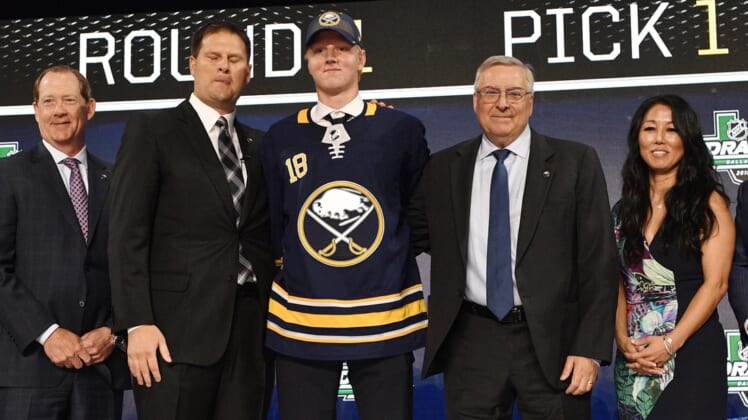 Jun 22, 2018; Dallas, TX, USA; Rasmus Dahlin poses for a photo with team executives after being selected as the number one overall pick to the Buffalo Sabres in the first round of the 2018 NHL Draft at American Airlines Center. Mandatory Credit: Jerome Miron-USA TODAY Sports

The Buffalo Sabres will select first overall in the 2021 NHL draft after the ping pong ball bounced their way in Wednesday’s draft lottery.

The expansion Seattle Kraken, who will begin play in 2021-22, landed the No. 2 overall pick.

Under this year’s rules, all other draft positions for non-playoff teams were determined by regular-season record. This means the Anaheim Ducks, New Jersey Devils and Columbus Blue Jackets round out the top five.

It marks the Sabres’ second time picking first overall in four years. They made defenseman Rasmus Dahlin the No. 1 pick in the 2018 draft. Their roster also includes a pair of No. 2 overall selections, centers Jack Eichel (2015) and Sam Reinhart (2014).

University of Michigan defenseman Owen Power is considered the top prospect available in this year’s draft, which will be held July 23-24. Power is the No. 1-rated North American draft prospect in NHL Central Scouting’s current rankings.