The Bills ended the 2021 season on the losing end of one of the greatest playoff games in NFL history. Their Divisional Round war against the Kansas City Chiefs was a high-wire act that went into overtime and saw the two squads score over 80 points.

Having come up a couple of wins short of a Super Bowl birth, 2022 will be about building a team that reaches the Big Game in Arizona next winter. Much of last year’s team returns with a few key additions. One of the biggest stories heading into camp will be if new offensive coordinator Ken Dorsey can maintain the high standard left by new Giants head coach Brian Daboll.

Related: Buffalo Bills schedule – Predictions and analysis for the 2022 season

Let’s dive into Sportsnaut’s Buffalo Bills training camp preview. As we examine everything you need to know from the camp’s location, schedule, and storylines to follow.

For the first time in two years, the Buffalo Bills will have their annual training camp at St. John Fisher College in Rochester, New York. In 2020 and 2021, the organization based operations out of ADPRO Sports Training Center in Orchard Park.

Training camp officially kicks off when rookies arrive on July 18. Then the veterans join their new teammates the following week on July 23. Fans will get to attend up to 10 events in person this summer, beginning on July 24 and stretching out all the way to August 11. You can find the full rundown of practices that will be open to the public below. 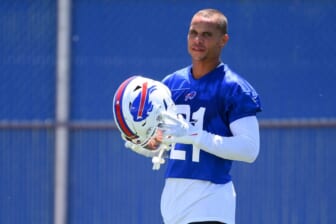 Can fans attend the Bills training camp this year?

Yes, fans can go and check out the stars of their favorite football team in person. All practices require a mobile ticket that is free and can be found on the team’s website here, starting July 13. Season ticket holders can get a set of four or less at 10 AM ET while the general public will get their chance at 1 PM ET.

Here are the top storylines to follow and position battles to watch during the Bills’ training camp 2022.

The pressure on Ken Dorsey

The Bills are expected to be a title contender in 2022, and they are ranked at or near the top of the Sportsnaut NFL power rankings and defensive rankings. However, the team’s high-flying offense is what has helped rebuild Buffalo’s reputation into being a legitimate force in the league.

Dorsey will be tasked with making sure this offense still runs like clockwork since core pieces like Josh Allen, Devin Singletary, Stefon Diggs, and Dawson Knox are back this season. It is a tall order and if he doesn’t deliver as Daboll did before him, there will be a whole bunch of heat reigning down on the new OC.

With top corner Tre’Davious White still recovering from a torn ACL and uncertainty on if he will be ready for the start of the season, Bills first-round pick Kaiir Elam will get serious playing time on a defense that — like the offense — has a standard to uphold after a strong showing last season. And he will be thrust into the fire trying to defend passes from Josh Allen to Stefon Diggs throughout the summer. Watching those growing pains will be one of the biggest stories during training camp.

Who will emerge as the team’s slot receiver?

When a team is a title contender most positions are pretty set. However, the slot receiver position is one spot on the team that is up for grabs after the team cut Cole Beasley in the spring. Free-agent Jamison Crowder, veteran Isaiah McKenzie, and 2022 fifth-round pick Khalil Shakir will be battling for Beasley’s old job. 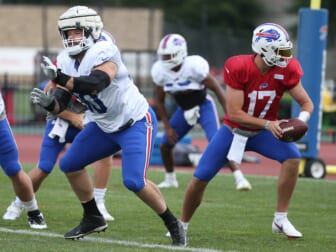 Also Read:
Josh Allen gets into a fight at Buffalo Bills training camp

Crowder is the odds-on favorite, but McKenzie and Shakir will have a real opportunity to win an important job on one of the best offenses in the league. Watching them battle for the position should be one of the most entertaining parts of training camp and the preseason.