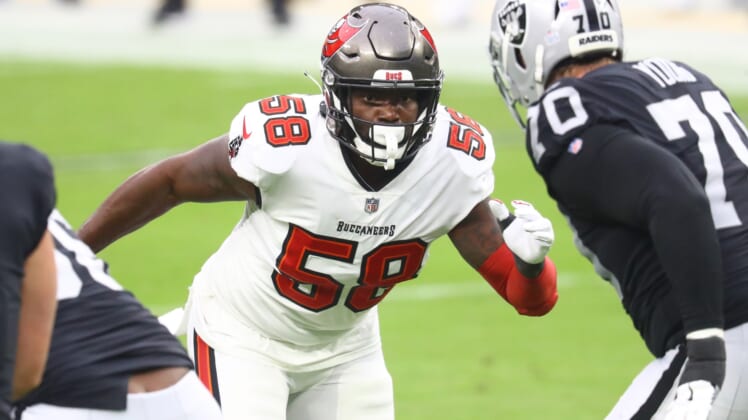 Over the next couple weeks, Tampa Bay Buccaneers rumors will point in the direction of the defending champions attempting to retain their core free agents.

That started on Tuesday with Tampa Bay placing the franchise tag on star wide receiver Chris Godwin. But in no way is this the end of it for general manager Jason Licht.

One of the top pass rushers in the NFL, former undrafted free agent Shaq Barrett is slated to hit the NFL free agent market next week. Apparently, Tampa Bay is doing everything it can to retain Barrett before the market itself opens.

“Having tagged WR Chris Godwin, I’m told the Bucs have begun discussions in earnest on a long-term deal with Shaq Barrett, one of the stars of Super Bowl LV and a crucial edge-rusher in Todd Bowles’ defense,” Albert Breer of MMQB reported. “Barrett won’t come cheap. But Tampa’s working on keeping him.”

Indeed, it would be an expensive proposition for Tampa Bay. Barrett, 28, has registered 53 quarterback hits and 27.5 sacks in two seasons with the Buccaneers. Back in 2019, he led the NFL with 19.5 sacks while accumulating 37 quarterback hits.

A former undrafted free agent of the Denver Broncos, the Colorado State product played under the $15.83 million franchise tag in 2020. That became an impossibility this year with the Bucs being forced to use said tag on Godwin.

Read More: How an Odell Beckham Jr. trade to the Tampa Bay Buccaneers could work

Tampa Bay Buccaneers rumors: What would it take to re-sign Shaq Barrett?

After the production we’ve seen from Barrett over the past two seasons, it’s safe to assume he’ll net north of $18 million annually on the NFL free agent market. In fact, something like $20 million per season is not out of the equation.

The question here becomes how long Barrett’s next contract will be. He’s 28 years old. Just recently, Barrett made his name known around the league after wasting away as a situational pass rusher for the Denver Broncos over the course of five seasons.

It’s also important to note that Barrett saw a downtick in production this past season. He recorded 16 quarterback hits and eight sacks. Is he a one-year wonder?

Either way, Buccaneers rumors suggesting that the team is working hard to retain Barrett can’t be considered too surprising. Whether that happens remains to be seen. Tampa Bay is currently a mere $2.15 million under the projected 2021 NFL salary cap.