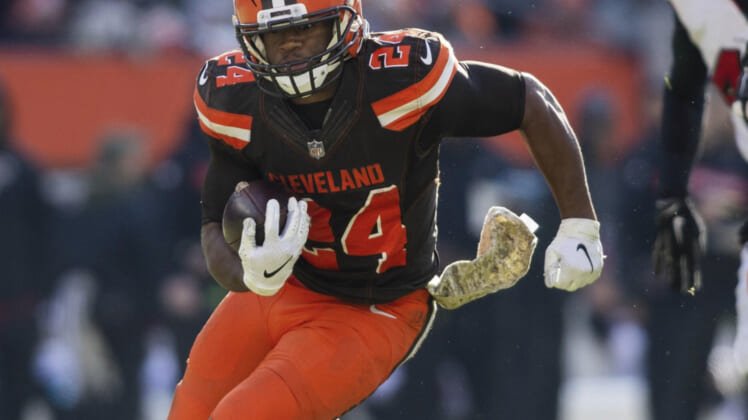 The Cleveland Browns are flying high following their third consecutive win, a 49-38 blowout victory over the Dallas Cowboys on Sunday. This represents just the second time since 1995 that Cleveland has started a season with a 3-1 record.

However, there was some concern over star young running back Nick Chubb. He suffered a knee injury on this play in the first half and did not return to the game. We now have some more information on this. It’s pretty good news.

“As one source explained it, the Browns are cautiously optimistic that Chubb didn’t suffer a torn ACL. For now, however, there’s nothing definitive on the situation,” Mike Florio of Pro Football Talk noted Sunday evening.

Chubb is still slated to undergo an MRI on Monday to detail the extent of the injury. A second-round pick back in 2018, the former Georgia standout put up 43 yards on six attempts before exiting Sunday’s win over the Cowboys.

Chubb, 24, is coming off a sophomore campaign that saw him tally 1,772 total yards and eight touchdowns at a clip of 5.7 yards per touch.

Browns backfield will be alright

With Chubb sidelined for the majority of Sunday’s game, recently-extended running back Kareem Hunt gained 71 yards on 11 touches, including this score.

All said, the Browns went for a whopping 307 yards on the ground against Dallas. Odell Beckham Jr. even got into the action with a 50-yard score to put the game away late in the fourth quarter.

Cleveland is slated to take on another 3-1 team Week 5 when it hosts the Indianapolis Colts. It remains to be seen whether Chubb will be available for that game. The MRI on Monday will likely tell us what we need to know about his status. But having Chubb and Hunt in the same backfield is a good problem for the Browns. That’s for sure.