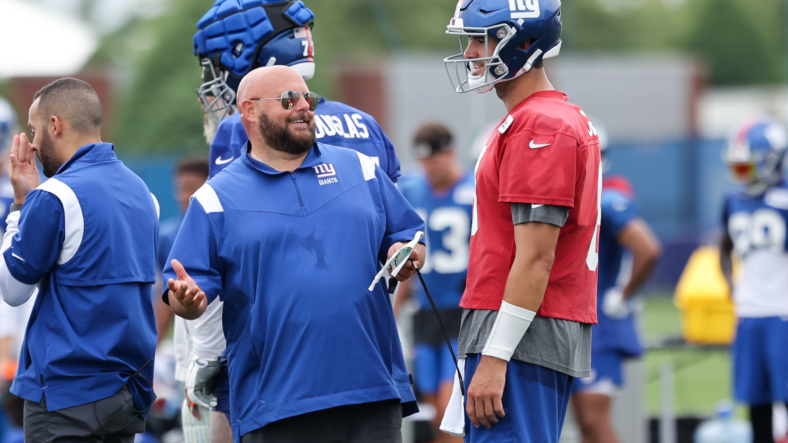 First-year New York Giants head coach Brian Daboll is accustomed to working with someone by the name of Josh Allen. Without ripping current Giants quarterback Daniel Jones, we can easily conclude that the former first-round pick is not on Allen’s level.

With Jones facing a make-or-break campaign in New Jersey, he must rely on Daboll’s coaching to improve off of what was a pedestrian three-year start to his career. Jones must also make sure that he takes criticism in a positive manner rather than brushing it aside.

Less than one full game into his career with Daboll calling the shots, Jones is already on the receiving end of the head coach’s wrath. Late in the fourth quarter of Sunday’s season opener against the Tennessee Titans, Jones threw an ugly interception into the hands of safety Amani Hooker. It came with New York down 20-13 and driving for the tie.

Jones is in his fourth season as an NFL quarterback. He can’t continue to make mistakes of this ilk. That is to say, throwing late and to the outside. It’s not acceptable. As a result, Brian Daboll absolutely laid into him on the sideline following the pick.

Daniel Jones bounces back after Brian Daboll blasts the quarterback

New York’s defense was able to hold Tennessee on the next possession after Jones interception. This gave Jones an opportunity to make up for that mistake. Boy, did he do just that.

Jones led the Giants on a 73-yard drive, culminating in a one-yard touchdown pass to Chris Myarick to pull New York within 20-19. Shockingly, Brian Daboll opted to go for two points and the lead. A pass to Saquon Barkley on the attempt was successful, giving New York a 21-20 lead with just over a minute remaining in the fourth quarter.

Despite Tennessee driving the ball down the field in the last minute, a missed field goal from Randy Bullock sent the Giants to the improbable win. It came after New York found itself down 13-0 at the half.

As for Daniel Jones, Daboll knows his quarterback. He fully understands how to work with a youngster. Just look t how much the aforementioned Allen improved during Daboll’s tenure as the Buffalo Bills offensive coordinator.

It’s in this that the sideline conversation we saw between Daboll and Jones coupled with the dramatic win could very well be a franchise-defining moment in Jersey. Props to Daboll for calling his youngster out. Props to Jones for responding in kind.