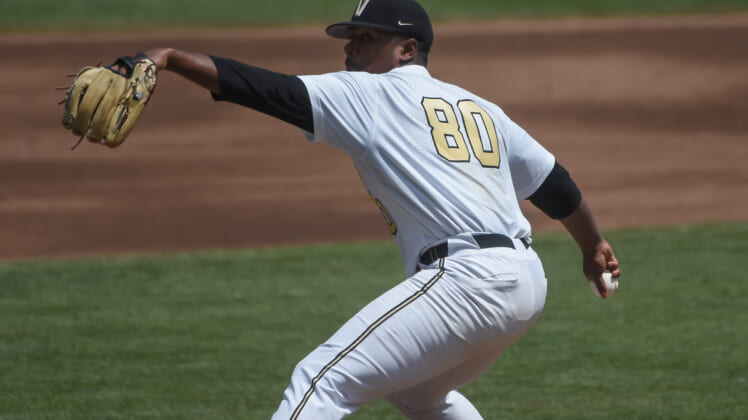 The 2022 MLB Draft is fast approaching and the Boston Red Sox are still facing a tough decision with the 24th overall pick. A year after Marcelo Mayer fell into the organization’s lap, Boston must now decide if it prioritizes a more MLB-ready talent or a prospect years away from a potential debut.

Obviously, the decision won’t be as easy this year. There is always a dip in talent as the first round unfolds and even the best players available in the class are years away from making an impact in the majors. Mayer won’t put on a Red Sox uniform until 2024 at the earliest and the odds of a player selected 24th overall reaching the majors aren’t high.

However, there might be a unique opportunity available to Boston. In Keith Law’s latest mock draft, the MLB insider had right-handed pitcher Kumar Rocker slide all the way to the 24th pick. As he explained in his analysis of the selection, Rocker has been on the Red Sox radar for more than a year.

“This one has some legs, as the Red Sox were heavy on Rocker once he started pitching for Tri-City in June, with people at every start, and they were serious about him last year until Marcelo Mayer fell into their laps at pick No. 4.”

Viewed as one of the elite prospects in the 2021 MLB Draft class, Rocker was selected out of Vanderbilt by the New York Mets with the 10th pick. While there was excitement regarding the pick, New York ultimately didn’t sign Walker due to medical concerns regarding his throwing shoulder.

Rocker didn’t return to Vanderbilt, instead preparing for the MLB Draft a year out. He eventually signed with the Tri-City ValleyCats, making his professional debut for the independent ball team and showcasing himself for MLB scouts in five starts.

Why the Boston Red Sox might draft Kumar Rocker

Scouts and MLB evaluators saw enough, leaving with more than enough confidence that Rocker still boasts the stuff to be a front-line starter. While there are still long-term medical concerns regarding the stability of his shoulder, he is expected to be a first-round pick.

He should be someone Boston targets if it wants immediate help. The 22-year-old has thrown limited innings this season, meaning his arm is a lot fresher than any of his peers coming out of college. Because of that and his tools that are ready to pitch in the majors, he could make his MLB debut months after being drafted.

This is a gamble worth taking for the Red Sox. The hit rate on MLB Draft picks isn’t especially high and many of the prospects drafted can take at least four years to reach the majors, if they reach the highest level at all. Rocker’s talent is undeniable and his upside matches that of anyone in the 2022 draft class.

For a club that needs pitching help in 2022, Rocker is the ideal selection. While teams like the San Diego Padres (15th overall), Philadelphia Phillies (17th overall), Atlanta Braves (20th overall) and Toronto Blue Jays (23rd overall) are looming threats to draft Kumar Rocker ahead of the Red Sox, he should be Boston’s pick if he is available. Assuming the Red Sox land him, there’s a realistic chance he could pitch in their starting rotation or bullpen by September and that would be huge for the MLB postseason race.