Finally, we can breathe. After four straight days of basketball insanity, the early part of this week gives us a chance to assess the field and take a good, hard look at the Sweet 16.

This is about as unorthodox a Sweet 16 as we’ve ever had. Michigan, a No. 3 seed, is somehow the highest seed remaining on the entire left side of the bracket. Kentucky’s path to the Final Four seems to have been cleared wide open thanks to UMBC, Nevada and Loyola-Chicago knocking off Virginia, Cincinnati and Tennessee. The East region has gone relatively chalk and remains Villanova’s to lose. If Duke was considered the favorite in the Midwest region before, it’s a heavy favorite now after Michigan State’s loss on Sunday. Of course, we all know that means nothing in this tournament.

Here are our eight biggest questions going into the Sweet 16.

Will Kentucky get a challenge before the Final Four?

It’s not just that the Wildcats are the highest seed left in their region, it’s that they seem to be playing their best basketball all year. Kentucky hasn’t lost since the last game of their regular season, as it ripped through the SEC Tournament before March Madness. Davidson played the Wildcats close in the first round, but never really threatened to win despite a five-point margin of victory for Kentucky. The Wildcats blew out Buffalo in the second round, despite an underwhelming performance from Kevin Knox.

Kansas State doesn’t figure to give them that much trouble in the Sweet 16 either. Bruce Weber’s squad got this far largely because it got to face UMBC in the second round. K-State has been fairly nondescript this season, ranking 39th on KenPom and struggling to score the ball. Nevada could give the Wildcats a game in the Elite Eight, should both teams make it that far, but a lack of depth will catch up to the Wolfpack at some point. Right now, the South region is Kentucky’s to lose.

Can Florida State keep up the momentum?

The Seminoles will come into Thursday as underdogs, and with good reason. Despite having knocked off top-seeded Xavier to get this far, Florida State has been inconsistent at best all year. It was just .500 in ACC play, and lost in its first game at the conference tournament. It places outside the top-30 in adjusted offensive efficiency and outside the top-50 in adjusted defensive efficiency, per KenPom. Oh, and Gonzaga — the Seminoles’ opponent — clocks in at seventh in the KenPom rankings.

Yet, Florida State is capable. We saw as much on Sunday, when the Seminoles held an explosive Musketeers offense to barely a point per possession. We saw it back in January with an upset win over North Carolina, then again in February with in overtime thriller against Clemson. There are two sides to FSU’s coin. If the Seminoles want to keep their season going though, there’s only one direction they can afford for it to go. 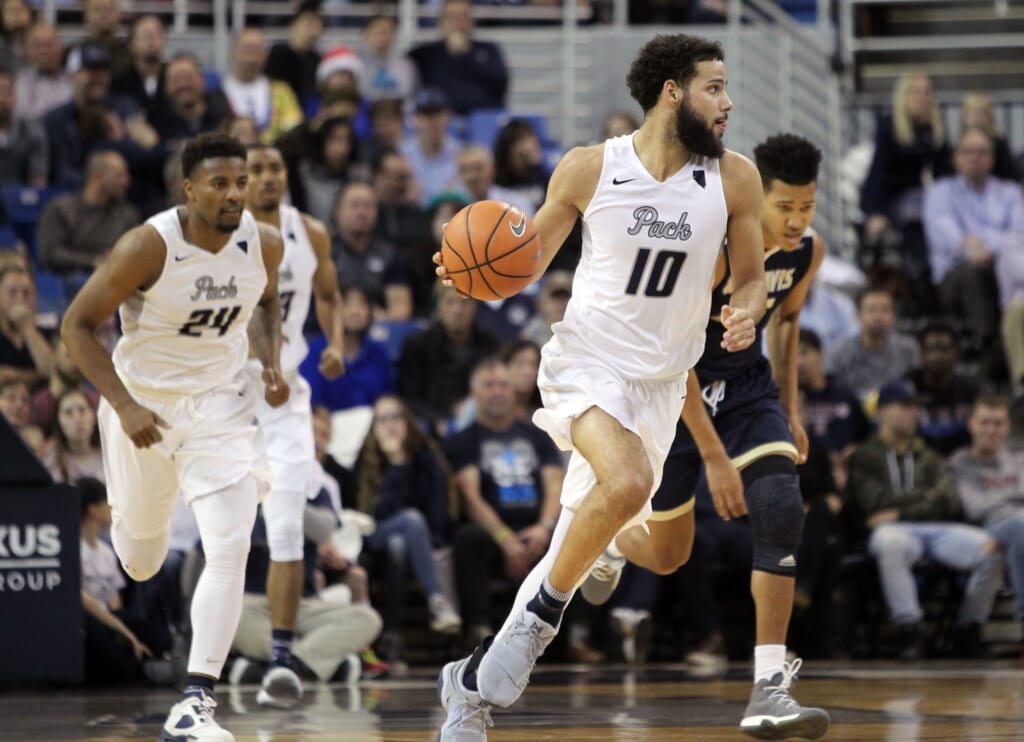 This isn’t as crazy as you think. Both teams rank in the top-40 on KenPom with the Wolfpack approaching the top-20. Whether Nevada ultimately moves on again will likely be determined by whether they can carry momentum — on both offense and defense — over from Sunday’s insane comeback win over Cincinnati. The Wolf Pack outscored the Bearcats 27-8 in the final 10 minutes of that game, but that was the only time in of late you could say Nevada was playing up to its potential. It took overtime (and Mohamed Bamba fouling out) in the first round to get past Texas — a team that simply isn’t as good as the Wolfpack. Nevada bounced out early in the Mountain West Tournament and dropped its final game of the regular season at San Diego State.

At this point, nobody needs to be told that Loyola-Chicago shouldn’t be taken lightly. If Nevada isn’t playing its best game, the Wolfpack will suffer the same fate as Miami and Cincinnati.

Can Michigan’s offense get back on track?

It’s become a mere sidenote in the wake of Jordan Poole’s game-winner, but the Wolverines aren’t playing their best basketball, particularly on the offensive side of things.

Though Michigan’s offense has lagged behind its top-end defense all year, the Wolverines seemed to turn a corner toward the end of the season. After dropping a game at Northwestern in early February in which it scored only 52 points against the Wildcats’ extended zone defense, Michigan went a full month — nine straight games — of putting up at least a point per possession and often did better than that. In the first two rounds of the NCAA Tournament, however, the Wolverines have lagged, failing to hit that mark against Montana and Houston as Moritz Wagner, Duncan Robinson and Charles Matthews have all found themselves in foul trouble, struggling, or both. That margin for error no longer exists.

The Wolverines caught a break in Texas A&M pulling off a stunning upset over North Carolina, but the Aggies are no pushovers themselves. Wagner’s presence as a pick-and-pop threat will be sorely needed against A&M’s slew of plodding big men. That’s the biggest matchup advantage Michigan will have on Thursday. It needs to be able to take advantage.

Presuming Haas is kept out of the Tournament for the remainder with a broken elbow, the Boilermakers could miss him badly. Despite only playing 23.4 minutes per game, Haas’ ability in the post anchored Purdue’s offense. Having four playmaking shooters — Carsen Edwards, P.J. Thompson, Dakota Mathias and Vincent Edwards — surrounding the 7-foot-2 Haas down low made Purdue nearly impossible to guard.

The offense works fine with Matt Haarms in at center instead of Haas — after all, Haarms played nearly as many minutes — but it’s simply not as good. Moreover, the Boilermakers lose a lot of depth. Jacquil Taylor saw playing time in both NCAA Tournament games after sitting in all but one contest from January 25 through the Big Ten Tournament. Haarms played 29 minutes on Sunday, a season-high, and Matt Painter could be forced to break out a lineup with Vincent Edwards at the ‘5’.

Ultimately, it wasn’t a huge issue against Butler. That game was close, but not because the Boilermakers couldn’t score. But Texas Tech — the fourth-ranked team in adjusted defensive efficiency, per KenPom — can expose any issues that arise. Purdue needs to find a way to keep its offense rolling without Haas, or its season ends on Friday.

It’s not easy to pick up a statement win amidst the chaos of March Madness, but if the Tigers’ 84-53 demolition of Auburn doesn’t count, well, nothing does. They put on a defensive clinic, holding Auburn to a season-low .75 points per possession, including just four points in the final 10 minutes of the first half.

Needless to say, playing anywhere close to as well against Kansas will put Clemson in the Elite Eight. Of course, that’s easier said than done.

The Jayhawks come into this game as one-point favorites, per KenPom. As good as Clemson’s defense is, containing Devonte’ Graham is a challenge for anybody. If Udoka Azubuike is at full strength, he’ll be tough to contain as well.  The Tigers’ tallest rotation player gives up three inches to the 7-footer. Still, this is a winnable game for Clemson. The Tigers can beat anybody when they play at their best — that much is clear and obvious at this point. An upset would be far from surprising.

How does Duke fare against the Syracuse zone? 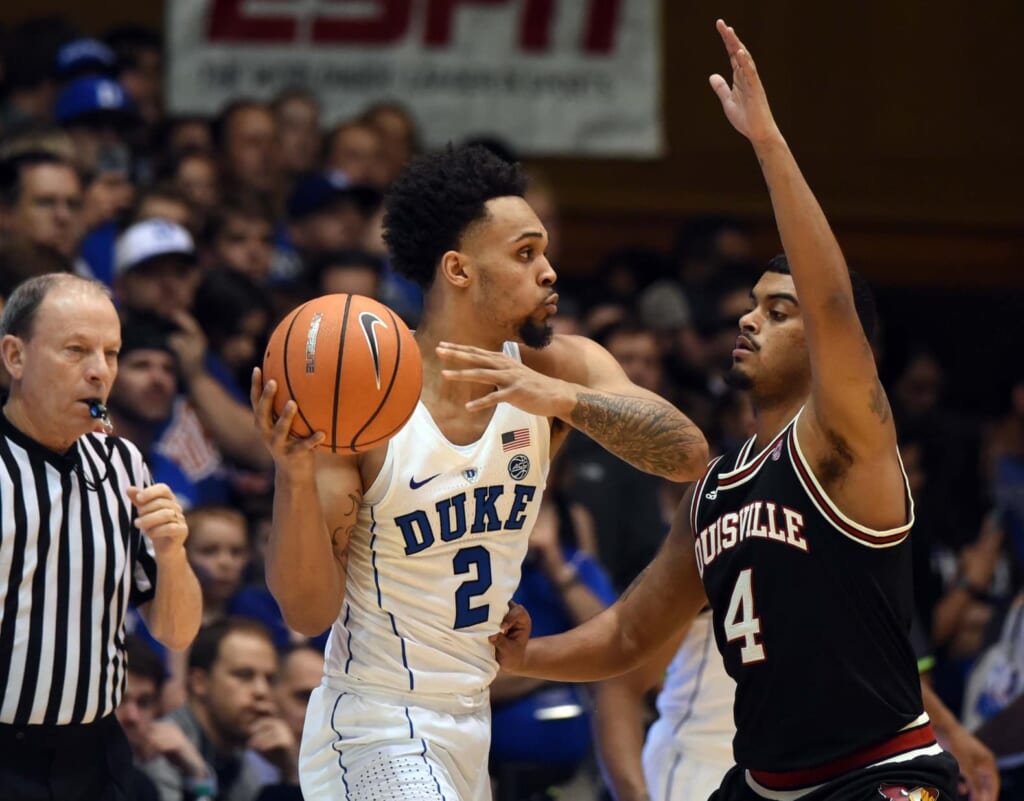 Marvin Bagley and Gary Trent have a chance to do what Tom Izzo wouldn’t allow Jaren Jackson Jr. to do in Michigan State’s loss to Syracuse on Sunday: beat the Orange’s zone by shooting over it. Bagley is a 38.6 percent 3-point shooter on the year with Carter besting him at 44.2 percent, though neither have taken a large number of attempts. Both can shoot comfortably from mid and, when open, beyond the arc. That may be all the Blue Devils need.

Michigan State lost to Syracuse because Izzo refused to adjust, playing big against a defense that begs opponents to play big. If Duke can stretch the floor and make shots from the natural holes in a 2-3 zone, it should win this game pretty easily. Syracuse is the worst team left in the field by KenPom’s rankings. The Orange are 139th in adjusted offensive efficiency and going against a top-10 defense in Duke. This game should not be close. If Bagley and Trent get going, it won’t be.

Is Villanova just that much better than everybody else?

The Wildcats have yet to face a serious challenge in the NCAA Tournament, predictably smashing Radford in the first round, then blowing through Alabama in the second. Villanova isn’t just the top-ranked team on KenPom — the Wildcats haven’t dropped below the No. 2 spot all year. And after Virginia’s stunning first-round loss, nobody is close to them.

Duke figures to give Villanova a run for its money in the Final Four, should both teams make it that far, but it will be tough for any team to challenge the Wildcats before then. West Virginia is always a tough out, but Villanova shouldn’t have much trouble with the press. It’s not inconceivable that the Wildcats run roughshod on offense and the Mountaineers struggle to keep up. Either Purdue or Texas Tech would be considerable underdogs against the Wildcats as well.

It will take a superhuman performance to bounce Villanova from this tournament before the Final Four. Whether any team has one in them remains to be seen.