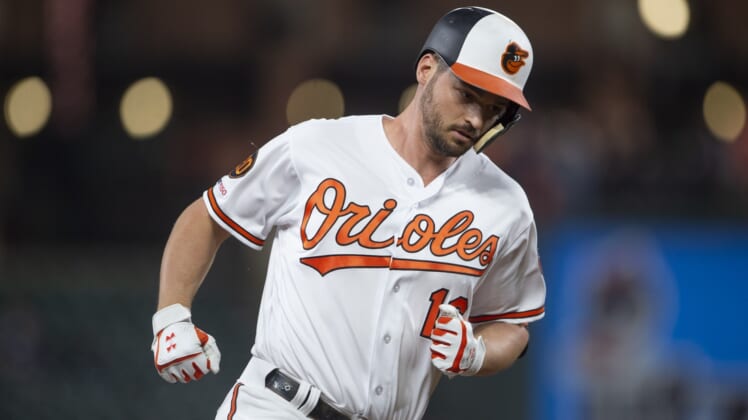 Baltimore Orioles first baseman Trey Mancini singled in his first at-bat since being treated for cancer in the team’s spring training opener on Sunday.

Mancini missed the 2020 season after he was diagnosed with stage 3 colon cancer nearly one year ago. Against the Pirates on Sunday, he hit a 3-2 pitch from Pittsburgh’s Chad Kuhl to center field for a single.

As he stepped into the batter’s box at Ed Smith Stadium in Sarasota, Fla., Mancini received a long ovation from the crowd, filled to 25 percent capacity because of social distancing guidelines.

.@TreyMancini got a hit in his first at bat back from colon cancer.

Earlier this week, Mancini, 28, said he was excited to be back.

“Just being able to come out here and feel like myself and feel great and participate in everything fully is something that I’m very appreciative of and I don’t take for granted at all,” he said.

Mancini received the cancer diagnosis after his 2020 spring training physical revealed abnormalities that required additional testing. He had surgery and went through six months of chemotherapy but took part in offseason workouts.

Orioles pitcher Thomas Eshelman, who threw the first inning, said he was happy to have his teammate back.

“It’s something that is super special, to happen to a great human being,” Eshelman said of Mancini’s single. “I’m just excited to have him back there on the field. It’s something that he has beat, so it’s great to see him back in the lineup and obviously get a knock in his first at-bat.”