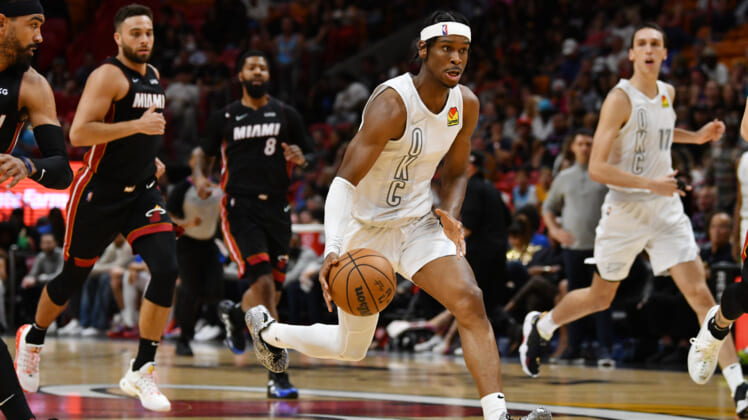 General manager Travis Schlenk and the Atlanta Hawks will have to pull off a trade or two this offseason if they want to be taken seriously as top-end title contenders moving forward.

One season after earning a surprise trip to the Eastern Conference Finals, Atlanta fell to the Miami Heat in the first round of the NBA Playoffs. The series wasn’t even close with Miami outscoring the Hawks by a combined 60 points.

Regression as it relates to the supporting cast behind Trae Young and the star guard’s own struggles led to a premature exit from the playoffs.

Following Atlanta’s down 2021-22 season, Schlenk touched on the possibility of the Hawks making some moves this summer.

“We made the decision last year to run the same group back. We probably should’ve tried to upgrade as opposed to stay status quo. The way the season played out, we’re certainly going to try to upgrade the roster moving forward into next season.”

Heading into what promises to be a franchise-altering offseason, we expect a couple Atlanta Hawks trades this summer.

John Collins, Danilo Gallinari, Clint Capela and Bogdan Bogdanovic are all high-priced veterans the Hawks could use as bait. They also have youngsters Kevin Huerter, De’Andre Hunter, Onyeka Okongwu and Jalen Johnson to entice other teams. Below, we look at two ideal Atlanta Hawks trade scenarios for the summer.

It’s an open question whether Thunder front office head Sam Presti will even consider trading Gilgeous-Alexander this summer. The team just signed him to a five-year rookie-level max contract ahead of the 2021-22 season and view him as a building block with 2021 lottery pick Josh Giddey.

With that said, Oklahoma City is nowhere near playoff contention even with SGA in the mix. The team has won 46 games over the past two seasons and has a huge amount of draft capital to continue with its rebuild. Why not add two youngsters in Hunter and Okongwu to build around with Giddey moving forward? It would round out the roster much better.

As for Atlanta, acquiring a stud two-guard to team up with Young would change the dynamics big time in Atlanta. Despite some injury concerns, SGA has proven to be a great all-around force since Oklahoma City acquired him in the Paul George trade from the Los Angeles Clippers.

SGA’s two-way ability would work well with Young in the backcourt. A move of this ilk would also enable Atlanta to run out a frontcourt trio consisting of some combination of Kevin Huerter, Clint Capela and John Collins.

A combo of Anthony Towns and Young would leave a lot to be desired on the defensive end of the court. That’s where Schlenk would have to work his magic when it comes to finding stoppers on defense throughout the summer.

But this duo would be absolutely dominant on the offensive end of the court. We’re talking about two players who average 25 points per game, can hit fromm the outside and can create their own shots. It would be one of the most-explosive duos in the entire NBA today.

Ahead of the NBA trade deadline, there were rumors that the Timberwolves had interest in Collins. It makes sense. The idea would have been to pair him up with KAT inside. Rather, we’re recommending this trade as a way for Minnesota to utilize Collins as a central part of its scheme in the frontcourt. The idea would be to build around stud guard Anthony Edwards moving forward.

Add in Capela’s defensive presence, and this would be a more well-rounded Timberwolves squad than the one who lost in the first round of the NBA Playoffs to the Memphis Grizzlies.