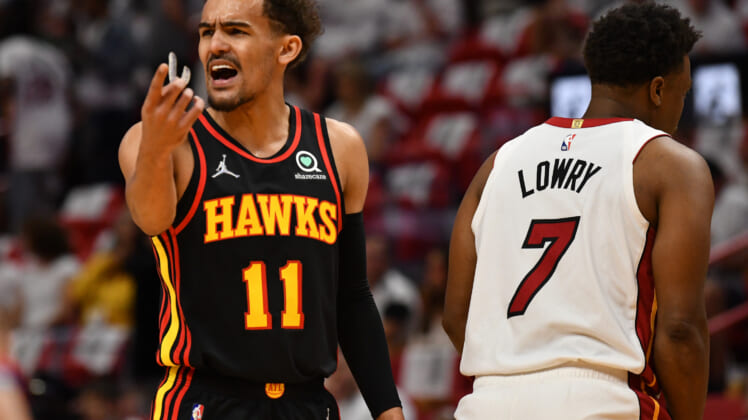 The Atlanta Hawks headed into Game 1 of their Eastern Conference Playoff series with Trae Young riding a hot hand.

Young scored 38 points on 13-of-25 shooting in a play-in win over the Cleveland Cavaliers to help his team to the playoffs for a second consecutive year.

It was a culmination of an inconsistent 2021-22 campaign after Young emerged as a star en route to leading Atlanta to the Eastern Conference Finals a season ago.

For general manager Travis Schlenk and Co., it has proven to be a struggle finding the right pieces behind Young on the roster.

Unfortunately for Atlanta, that came up big time in the team’s embarrassing 115-91 loss to open its first-round series against the top-seed Miami Heat.

Trae Young shot a miserable 1-of-12 from the field, scoring eight points in the process. He turned the ball over a whopping six times and missed on all seven of his three-point attempts.

With Young struggling, longstanding issues for the Hawks reared its ugly head. Here’s why this is going to be an issue for Atlanta moving forward in its series against a deep and talented Heat squad.

Related: Youngsters ready to step up in 2022 NBA Playoffs

Atlanta Hawks have no No. 2 option behind Trae Young

Danilo Gallinari led Atlanta in scoring with 17 points on 5-of-12 shooting. He also finished minus-17 in 29 minutes of action.

De’Andre Hunter was second in scoring with a mere 14 points. Despite his performance, the wing only took eight shots in 35 minutes of action (hitting on six of them). Someone like Hunter must step up and prove to be more aggressive when Young is struggling. It’s that simple.

During the regular season, Atlanta boasted a 4-11 record when Young failed to score 20 points. It was 39-28 when he hit the 20-point plateau.

We know Schlenk has been attempting to find that second scoring option behind Young. We also know that the Hawks’ brass didn’t initially believe John Collins could be the guy before biting the bullet and signing him to an extension.

In his return to action on Sunday, Collins played 21 minutes. He scored 10 points on 4-of-6 shooting. Perhaps, the big man will be able to provide more when his minutes restrictions are off the table.

However, that’s the longer-standing issue for Atlanta. Take Stephen Curry and his Golden State Warriors. Making his return to the court after missing the final 12 regular season games with a foot injury, Curry struggled in the Warriors’ playoff opener against the Denver Nuggets. Despite this, Golden State was able to ride Jordan Poole and Klay Thompson to a blowout win over the Nuggets.

This story has been repeated over and over again during the early stages of the 2022 NBA Playoffs. What we saw from Miami against the Hawks on Sunday proved to be yet another example of this.

The team’s leading scorer from the regular season, Jimmy Butler, put up his average of 21 points on 9-of-15 shooting. Meanwhile, Miami’s second-leading scorer struggled big time. Also coming off the bench, Tyler Herro scored a mere six points on 3-of-11 shooting — including a 0-for-4 mark from three-point range.

Noticing a theme here? When a star player has struggled for a contending team throughout the past several postseasons, said team is able to overcome it to a large extent due to the performances of role players.

The Hawks simply don’t have that behind Trae Young. And in reality, it could lead to a relatively short Round 1 series against Miami and sweeping changes behind the franchise cornerstone once the summer comes calling.