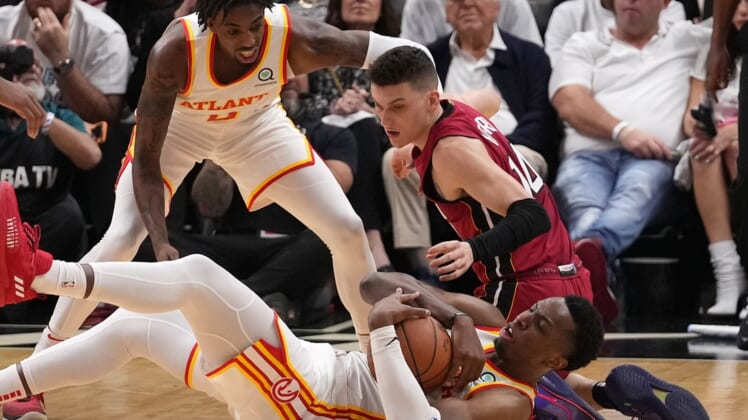 Victor Oladipo scored 23 points and Bam Adebayo posted 20 points and made a key defensive play as the Miami Heat held off the visiting Atlanta Hawks for a series-clinching 97-94 victory in Game 5 of the Eastern Conference’s first round Tuesday night.

The Hawks had a couple of chances to pull even in the final 30 seconds, but a missed shot came before a game-ending steal by Adebayo.

Miami will be off until opening the conference semifinals Monday night against Philadelphia or Toronto.

Max Strus scored 10 points during Miami’s 17-0 run late in the second quarter that allowed the Heat to build a 54-42 halftime lead.

Tyler Herro poured in 16 points off the Miami bench and Strus finished with 15 points. The Heat played without scoring sensation Jimmy Butler (knee injury) and, for the second game in a row, point guard Kyle Lowry (hamstring).

Atlanta’s De’Andre Hunter scored 35 points, including 11 in the last five minutes. Kevin Huerter and Danilo Gallinari both had 12 points for the Hawks, who were unable to repeat last year’s postseason success when they reached the conference finals.

Atlanta star guard Trae Young was held to 11 points, scoring just three points — all on free throws — in the fourth quarter. He was 2-for-12 from the field, including 0-for-5 on 3-pointers, and was charged with six turnovers.

Miami’s big burst came in the final minutes of the first half after the Hawks led for the first eight minutes of the second quarter. But Atlanta didn’t have a field goal in the last 4 1/2 minutes of the half, with Hunter’s two free throws with 3.2 seconds before halftime halting Miami’s scoring run.

The Hawks recovered enough to close within 79-76 with 8:14 remaining on Onyeka Okongwu’s three-point play. Oladipo posted seven of Miami’s next 13 points as the spread reached 92-82 before Atlanta’s final push.

Adebayo and Hunter each led their teams with 11 rebounds.

This was the closest outcome of Miami’s four wins in the series; the three others came by at least 10 points.