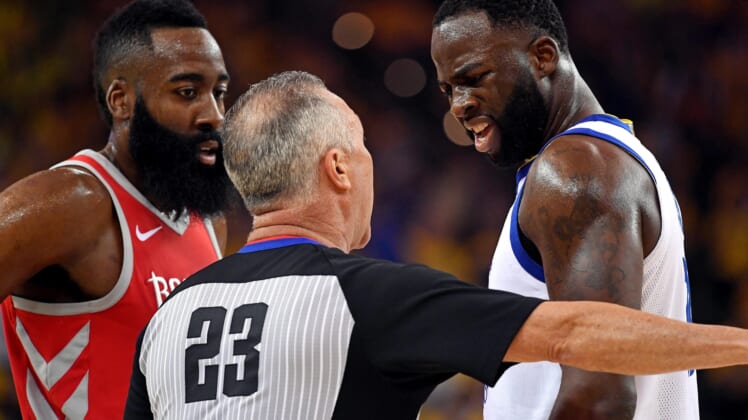 Game 1 of the Western Conference Semifinals series between the Houston Rockets and Golden State Warriors was a contentious affair. Warriors center Andrew Bogut thinks the refs will dominate Game 2 in response to the criticism levied their way afterward.

Speaking to Jim Rome on “The Jim Rome Show” Monday, Bogut said he expects the refs to take Game 2 over with excessive fouls called from the opening tip. He quipped that the game will “take five hours” to play and said both teams will probably be in the bonus within minutes of the first quarter.

Players from both sides had valid complaints about calls and no-calls from the refs during Sunday’s game, and in particular the Rockets were livid about the way the game ended — with Chris Paul getting ejected following his second technical foul.

In particular, James Harden was beside himself not to be getting calls on his three-point attempts. Warriors players seemed to sometimes be coming down in his landing area.

Though, people who disagree with this notion have a realistic argument.

After the game, Harden made a fuss about how if the refs would only call a fair game he wouldn’t complain. Draymond Green had something to say about that, to nobody’s surprise.

Regardless of your allegiance, it’s hard to find anyone who thinks Game 1 was anything other than a disaster from the officiating crew.

With that in mind, it’s not hard to imagine that Bogut’s prediction for Game 2 will come true.