Aaron Rodgers blasts Drew Brees: ‘Never about the anthem or a flag’ 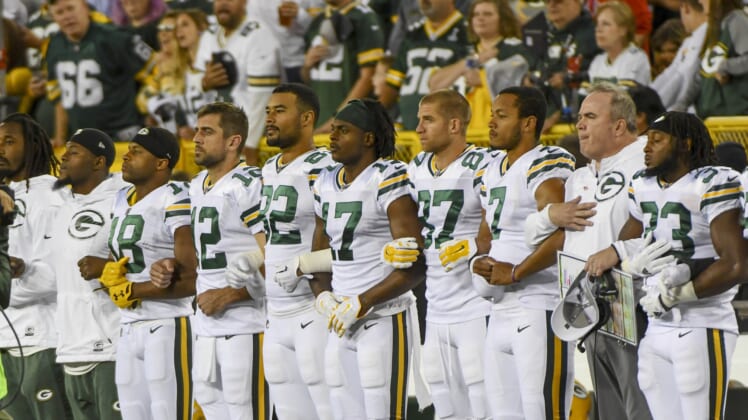 Drew Brees drew rampant criticism from across the NFL after speaking out against athletes who kneel during the national anthem. Now, Green Bay Packers quarterback Aaron Rodgers is weighing in on NFL players protesting and delivered a huge shot against Brees.

After hearing it from teammates Michael Thomas and Malcolm Jenkins, along with other NFL players, Brees took a shot from Rodgers for suggesting kneeling during the national anthem is disrespectful to the flag.

Aaron Rodgers: ‘It has NEVER been about an anthem or a flag”

Rodgers, who has subtly been an advocate for social justice in recent years, took to Instagram to defend players who kneeled or locked arms during the national anthem in 2017.

In his statement, the two-time NFL MVP didn’t hold back and directly addressed Brees’ suggestion that kneeling disrespects the military.

“A few years ago we were criticized for locking arms in solidarity before the game. It has NEVER been about an anthem or a flag. Not then. Not now. Listen with an open heart, let’s educate ourselves, and then turn word and thought into action. #wakeupamerica  #itstimeforchange #loveoverfear❤️ #solidarity #libertyandjusticeforall #all“

Rodgers joined his teammates during a peaceful protest before their game against the Chicago Bears in 2017. While he received some criticism at the time from fans, aa majority of the backlash came against players who kneeled during the national anthem.

Even as one of the NFL’s biggest stars, Rodgers hasn’t been shy about calling out the league ever since it kept Colin Kaepernick out of the league.

Kaepernick protested during the 2016 season to raise awareness for police brutality and racial injustice. Less than a year later, with the former NFL star suddenly out of the league, Rodgers made it clear he believed Kaepernick was blackballed by NFL teams.

A year later, Rodgers expressed his support for LeBron James and encouraged NFL players to keep fighting for social justice on the public stage, via NFL.com. He also pushed back against President Donald Trump and the notion that protests during the national anthem were against the military, the flag or the anthem.

“I don’t know how many times we can say, as a player and as a group, how much we love and support and appreciate the troops, and the opportunities this country allows us,” Rodgers said, via NFL.com. “But this is about equality and something bigger than ourselves, and bringing people together, and love and connectedness and equality and social justice, and putting a light on people who deserve to have the attention for their causes and their difficult situations that they’re in.

From the reaction of players across the league, it’s clear Brees won’t see the same support or appreciation he used to have from his peers. Meanwhile, Rodgers’ comments will likely make him even more respected in his own locker room and across the NFL.