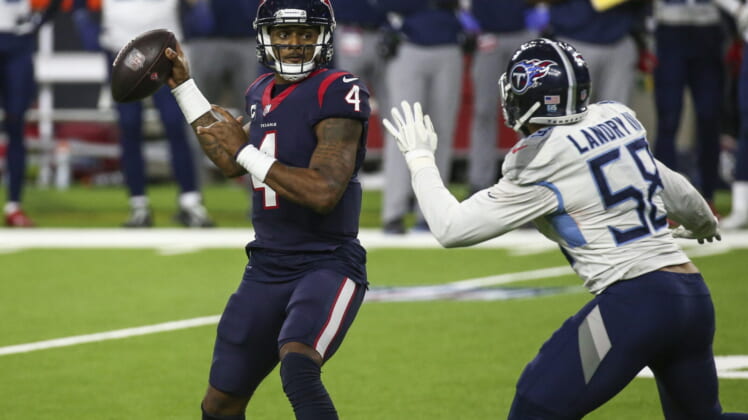 The final five games of the 2021 season will explain the Las Vegas Raiders offseason agenda.

A new head coach with a new coaching staff may not be the only need of addition for the Silver and Black next season.

Quarterback Derek Carr has one year left from his five-year, $125 million extension he signed during the summer before the 2017 season.

Whether the 6-foot-3 play-caller gets traded before the 2022 season begins or before the Raiders extend him, the 2022 free-agent class features experienced starting quarterbacks this season.

Who is a better option that knows the Raiders offensive scheme than Carr’s backup?

With Las Vegas being nicknamed “The Ninth Island,” Marcus Mariota has enjoyed his time in his home away from home. Mariota, from Honolulu, has played in seven games over the last two seasons.

The most volume in a game Mariota received came last season when Carr exited the game early against the Los Angeles Chargers in an empty Allegiant Stadium. Mariota completed 17-of-28 passing for 226 yards and a touchdown with an interception. He also carried the ball nine times for 88 yards and a rushing touchdown in the Raiders loss.

Despite a calf injury that sidelined Mariota in the preseason a few months ago, the former second overall pick in 2015 has been used over the last few weeks in a more mobile quarterback role, similar to the likes of New Orleans’ Taysom Hill.

Mariota’s ability to run was on full display in front of a national audience on Thanksgiving a few weeks ago when he was under center, and Carr was lined up as a receiver at the 3-yard line facing first-and-goal.

The 2014 Heisman Trophy winner took the snap, ran right of the pocket and dove into the endzone to give the Raiders an 11-point lead en route to a 36-33 overtime victory.

Mariota, who has been in the Raiders offensive scheme for two years now, could be an option, but is a free agent after this season.

Both Minnesota Vikings quarterback Kirk Cousins and Carr are free agents after the 2022 season, which means both play-callers could have heightened trade value this offseason and before next season’s trade deadline if either does not get extended.

One similarity between Carr and Cousins is that both can throw the football. While Carr and Tampa Bay’s Tom Brady have been going back-and-forth for the league’s leader in passing yards, Cousins is not far behind with 3,353 yards, which currently ranks sixth among NFL quarterbacks.

From a playoff perspective, Cousins played in three games – and won once – while Carr got the Raiders the playoffs in 2017 but didn’t play due to injury.

Like Cousins, San Francisco’s Jimmy Garoppolo enters free agency in 2023 and with rookie Trey Lance looking to become the 49ers starting quarterback in 2022, Garoppolo may get traded this offseason.

Garoppolo, who was Brady’s backup when both were in New England, was sent to San Francisco before the 2017 trade deadline and had a 28-13 record as a member of the 49ers.

With the knowledge of playing behind Brady and being coached by Bill Belichek for a little more than three years, Garoppolo was able to get two Super Bowl rings.

Through 11 starts this season, the 30-year-old quarterback has completed 66.8% (207-for-310) of his passes for 2,641 yards and 15 touchdowns with eight interceptions. In addition, Garoppolo has at least one passing touchdown in all but one game. (He scored two rushing touchdowns in the lone non-passing TD game)

Unlike Cousins, the only question about Garoppolo is the ability to play an entire season, which he has only done once in his eight-year career.  Raiders fans might be allergic to this possible choice, but he could be an available bridge choice for Mike Mayock.

Houston Texans quarterback Deshaun Watson has not recorded a snap in 2021 due to legal allegations against him. Still, since he was drafted in the first round four years ago, he has been to the Pro Bowl for three consecutive seasons from 2018 to 2020.

Watson, who was garnering traded this past summer and before last month’s trade deadline, is not a free agent until the 2026 season.

However, despite the legal allegations and before Watson saw success in the NFL, he made noise at Clemson University when he led the Tigers to the 2017 National Championship in 35-31 victory over Alabama.

In the closing seconds, Clemson was trailing 31-28 at the 2-yard. Watson took the snap and ran right, finding an open 5-foot-11 receiver named Hunter Renfrow, a redshirt sophomore at the time.

Although the Raiders have not been reported to be in trade talks with Houston for Watson, rekindling those moments with Renfrow on an NFL field could be nostalgia, especially for a quarterback that went to three straight Pro Bowls and made playoff appearances in 2018 and 2019.

The class of 2022 free agent quarterbacks features at least two 38-year-old in Pittsburgh’s Ben Roethlisberger and Washington’s Ryan Fitzpatrick. Another who could add to that mix is Green Bay’s Aaron Rogers. Roethlisberger, and possibly Rodgers, is rumored to retire at the conclusion of the season, leaving Fitzpatrick as an option, despite suffering season-ending hip surgery after the first week of the season.

New Orleans’ Jameis Winston is another free agent play caller at the conclusion of the season and like Fitzpatrick, is sidelined for the rest of the season due to a torn ACL and damage to his MCL in his knee.

Among starting quarterbacks this season, Houston’s Tyrod Taylor and Denver’s Teddy Bridgewater are both entering the market this spring.

In 12 starts this season, Bridgewater has a 67.3% rate at completing passes for 2,775 yards, 16 passing touchdowns and two rushing touchdowns to go along with seven interceptions.

Taylor has been limited by injuries throughout the season and has started six games this season. The 32-year-old has completed 60.7% of his passes for 966 yards with five passing touchdowns and three rushing touchdowns. Taylor has thrown five interceptions in the six games he has played this season.

Chicago’s Andy Dalton and Miami’s Jacoby Brissett, who are both backup quarterbacks for their respective organizations, are also free agents this spring.

Brissett, who has five starts in eight games this season has completed 62.7% of his passes for 1,283 yards and five touchdowns, while filling in when Tua Tagovailoa was injured.

Dalton, 34, has been a veteran presence to rookie Justin Fields this season in Chicago and has started in four games this season, including the last two weeks. Overall, Dalton has played six games this season and has recorded 1,017 passing yards on a 64.1% completion rate with six touchdowns nd six interceptions.

If no one, Raiders can stick with Carr

Statistics may say one thing about Carr, but his passion for his teammates and the organization has been prevalent now more than ever as the season has gone on, despite losing its head coach and its deep threat receiver.

Although his progression in the Raiders offensive system for the fourth year now may only be seen through film, the stats prove he is still on track to achieve and surpass his statistics by the season’s end, even with an extra game on the 2021 slate.

The 30-year-old quarterback also has a more significant number in completions and passing numbers this season, compared to the first 12 games last year.

Carr has the opportunity to continue to lead this football team and it has shown with 27 game-winning drives during his tenure with the Raiders, including eight over the last two seasons.

If the organization believes in Carr for 2022, the three-time Pro Bowler will have to produce and win to earn a new contract before the 2023 season begins.