5 must watch games for NFL Week 16 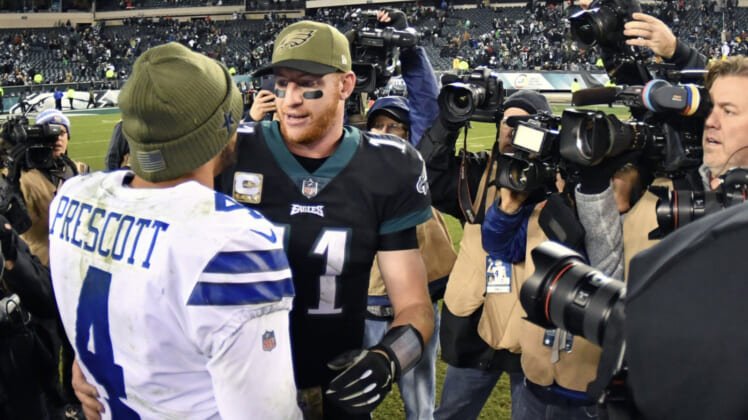 With two weeks left in the NFL season, a lot is on the line as the league goes with a four-day slate in Week 16.

Can the Buffalo Bills keep the AFC East interesting Saturday afternoon against the Patriots at Gillette? Will the Los Angeles Rams keep their playoff aspirations alive against an 11-win 49ers team at Levi’s Stadium Saturday night?

Sunday offers a ton of interesting games. None more so than the Eagles and Cowboys battling for the NFC East title in Philly.

These are among the five games you simple can’t miss as the NFL wraps up its regular-season slate.

Both the Bills and Patriots were able to clinch playoff spots this past weekend. Buffalo was able to lock up that rare playoff appearance with a win over the Pittsburgh Steelers on Sunday night. And while New England is playing postseason ball yet again, a lot has yet to be decided on that end.

Technically, Buffalo can still earn the AFC East title. It will need a win Saturday against the Patriots while taking out the Jets Week 17 and watching New England lose to Miami.

Sure that seems unrealistic, but it’s still possible. For the Patriots, there’s also this whole first-round bye thing. They are just one game up on Kansas City for the top spot and has lost the tiebreaker.

Each team is coming off a disastrous loss last week. For the Rams, it included a blowout defeat at the hands of the Cowboys in Dallas. This pretty much ended their hopes of earning a playoff spot and repeating as NFC champs. Los Angeles must win its final two games and hope the Vikings lose out to play meaningful January football.

As it relates to the 49ers, they put up a stinker of a performance in a home loss to the Atlanta Falcons. This dropped San Francisco from the No. 1 seed in the NFC to the fifth spot. Despite that, the 49ers can still earn home-field advantage in the playoffs if they win out.

A rematch of San Francisco’s blowout 20-7 win in Los Angeles back in October, this should be a fun one under the lights at Levi’s Stadium Saturday night.

Monday night’s blowout 34-7 win over the Colts helped New Orleans rebound from its late-game loss to San Francisco the previous week. It also gives Drew Brees and Co. a real opportunity to earn at least a first-round bye in the playoffs.

A lot would have to happen in this regard. Each at 11-3 on the season, Seattle, Green Bay and San Francisco boast the tiebreaker over New Orleans. The hope for these Saints is that somehow Seattle or San Francisco wins the west while losing one more game and the Packers take the north with a lesser record than New Orleans.

In the AFC, it’s a bit less convoluted. Tennessee’s Week 15 loss to the division-rival Texans moved the team to one game out in the AFC South. It is also tied with Pittsburgh for the No. 6 seed, but loses the tiebreaker. If the Titans want to have any chance, they’ll need to win out. That starts Sunday afternoon in Nashville.

Winner take all. That’s pretty much the case heading into this late-afternoon affair between the Cowboys and Eagles in Philadelphia. If Dallas were to come out on top, it would clinch the NFC East by virtue of sweeping the Eagles. On the other hand, a win Sunday and a victory over the New York Giants in Week 17 would clinch the division for Philadelphia.

There’s a whole heck of a lot on the line here. Jason Garrett’s status as the Cowboys’ head coach chief among them. The winner of this game will likely take the division and could end up making a major statement in the wild card round against a double-digit win squad in that of the Seahawks, 49ers or Vikings. No pressure.

What better way to end Week 16’s action than this rivalry game in the old black and blue division a couple nights before Christmas? One game up on Minnesota in the NFC North, Green Bay can clinch the division with a win here. It could also take the next step in earning a first-round bye and potential home-field advantage throughout the NFC Playoffs.

On the other hand, Kirk Cousins and the Vikings are looking to clinch a playoff spot and remain alive in the division.

Both teams will likely be playing meaningful January football. How they are seeded once that comes calling will tell us a lot about their chances to win the conference. That makes this Week 16 outing a must watch in every regard.