Anthony Rizzo is coming off a yawning two-year stretch at the plate, which includes a 2021 campaign split between the New York Yankees and Chicago Cubs. When combining the 60-game 2020 season and the one that recently concluded, Rizzo posted a .240 batting average and a .775 OPS.

At the same time, he’s a premier defender at the corner infield position with overwhelming power and a knack for working the count. Still 32, Rizzo remains one of MLB’s best all-around first basemen. He has a trove of postseason experience and can be a difference-maker for a playoff hopeful given his smooth play.

Max Scherzer, Corey Seager, Clayton Kershaw, Chris Taylor, Kenley Jansen and Joe Kelly are all free agents. In other words, the Dodgers are going to lose multiple accomplished players this offseason and will have voids to fill. A short-term investment in Rizzo makes some sense for manager Dave Roberts’ ballclub.

Serving as the everyday first baseman, Rizzo would give the Dodgers a rock in the infield. The signing would see Max Muncy play second base on a more full-time basis. Rizzo would also further the Dodgers’ offensive balance in their mix of right and left-handed hitters.

This is a win-now team with a lot of players making or poised to eventually command a top-tier contract. Keeping in mind the likelihood that they lose at least one of Taylor and Seager, the Dodgers will have production to replace in the short term. Rizzo is a way for them to do as such while further weaponizing their infield defense. 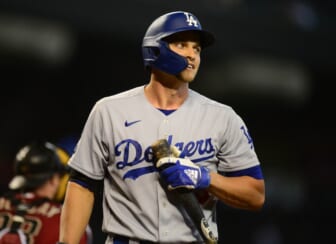 There would be minimal, if any acclimation time for Rizzo, as the Dodgers have a bevy of reliable fielders, and the individual himself is accustomed to postseason play. In a way, Rizzo’s arrival allows everyone on the Dodgers to play their typical position and/or one they field well (e.g. Trea Turner at shortstop and Muncy at second).

What could ultimately stop Rizzo from going to Los Angeles, however, is the team preferring to find internal replacements for those that depart, as their positional depth chart is deep at the MLB and MiLB levels.

There are numerous reports hinting at the Athletics being busy on the trade market, when it comes to trading players within three years of free agency. That includes vital pieces like Matt Olson, Matt Chapman, Sean Manaea, Frankie Montas and others. In the scenario they move Olson, the A’s are a viable option for Rizzo.

One way or another, the A’s are going to do their thing, and that means cranking out production with who’s in the building. Rizzo wouldn’t necessarily balloon Oakland’s payroll, as a handful of the aforementioned trade candidates are due to make eight-figure salaries next season. The A’s would be moving on from Olson and others for blue-chip prospects while minimally downgrading at first.

Rizzo has a lot going for him that fits the A’s identity. This is a franchise that loves and prides its offense on power hitters, which Rizzo has been for the entirety of his MLB career. Meanwhile, the A’s are a defensive savvy team, and Rizzo is a reliable first baseman.

The A’s have a daunting road ahead if they plan on competing for the playoffs while also moving on from premier players. That said, they’re surely going to operate as if they have a chance to defy the odds. This team was the Tampa Bay Rays before the Rays became a contender in recent years.

All that being said, a Rizzo-Athletics marriage may not take place due to the front office potentially wanting to spend less on an everyday player (their franchise rarely has a payroll near $100 million). 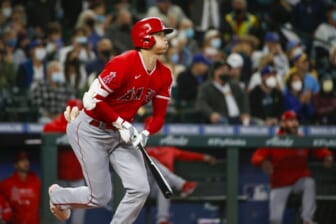 Rizzo didn’t tear the cover off the ball in his two months with the Yankees, but he carved out a potential long-term role with their team. The veteran first baseman and the Yankees sticking together makes a lot of sense for both parties.

From New York’s perspective, infield defense has been a chronic weakness under manager Aaron Boone, and it’s a guessing game as to who starts at all four infield positions next season. Keeping Rizzo goes a long way towards them having a sturdy infield unit. He scoops throws in the dirt with ease, which will come in handy if the team promotes top infield prospects Anthony Volpe or Oswald Peraza during the 2022 MLB season.

At the plate, Rizzo helps give the Yankees offensive balance. For starters, he gives a team that has been prone to strikeouts in recent memory a player that is difficult to strike out and puts the ball in play with frequency. Then there’s the team’s balance of right and left-handed hitters being more even with Rizzo.

The Yankees have a bevy of pivotal decisions to make this offseason, one being how to proceed with star right fielder Aaron Judge, a free agent after 2022. There’s also merit behind them pursuing a premier middle infielder on the free agent market. No matter the way they address those two situations, Rizzo should be a part of their future.

He’s capable of better performance, and even if the 2020-21 version of him is the player the Yankees get for the duration of his contract, it’s something they can benefit from. A mere midseason enhancement in Rizzo has become a way for the Yankees to improve from all aspects of the game.