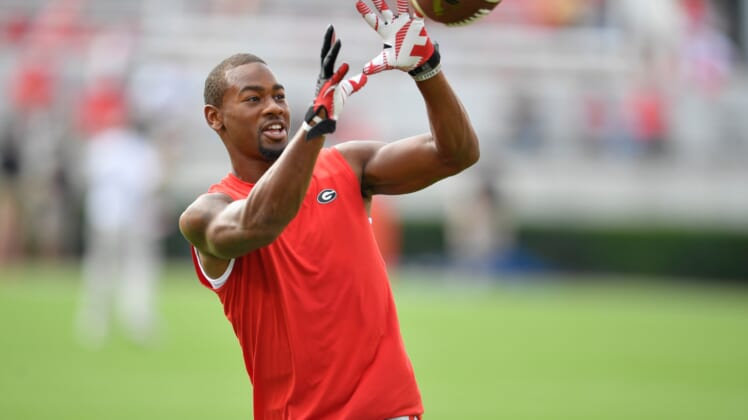 Week 4 was a do-or-die week for many of college football’s title contenders. From USC to Oklahoma to Michigan to Penn State, playoff hopefuls got their biggest challenges to date. Though those four teams ultimately won, others, such as Florida State, did not.

This list focuses on players you may not realize were tremendously valuable to their teams’ efforts from looking at the box score. The players whose impact is difficult to state with numbers, who did what they had to do to help their team win. In weeks like this one, those players became all the more important.

After starting quarterback Wilton Speight went down, it looked like the Wolverines were in a boatload of trouble. However, John O’Korn ended up having a nice game in relief and Michigan beat Purdue,

28-10. McKeon, who caught five balls for 82 yards, was a big reason why. At certain points in the game, McKeon was a security blanket of sorts for O’Korn. He helped the fifth-year senior get his legs under him and could become a pivotal player in the offense if Speight is out for an extended period of time.

The only place Jones appears in the boxscore is under the ‘interceptions’ tab. Jones picked off Cal quarterback Ross Bowers twice in USC’s 30-20 win on Saturday, a huge part of a game in which the Trojans had to lean on their defense for a while. His contributions gave the offense time to figure things out. It eventually did, as evidenced by the final score. 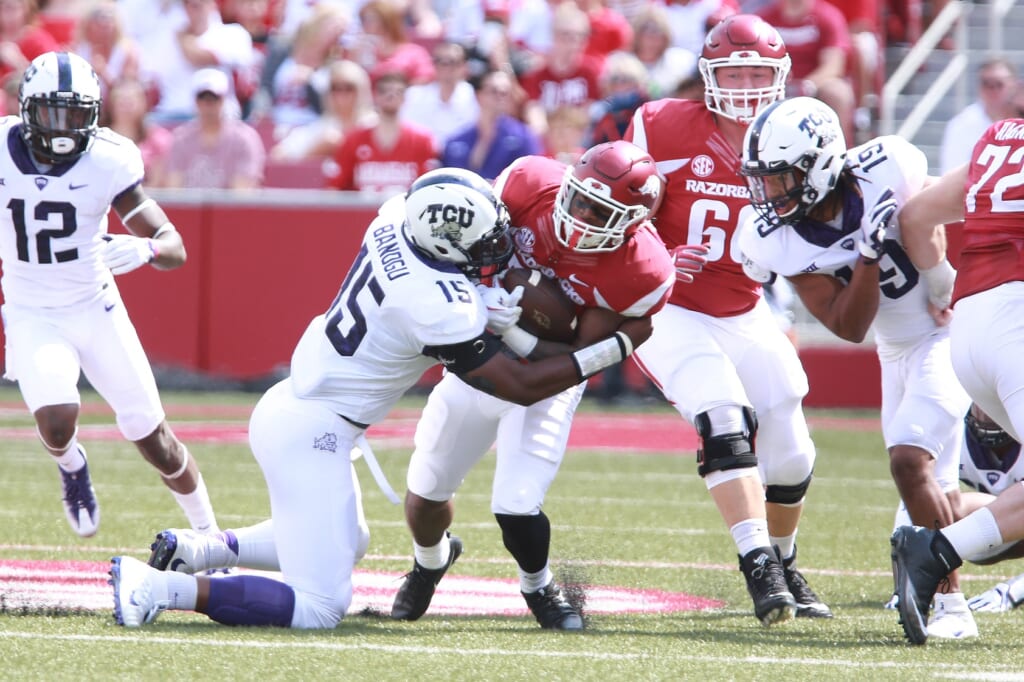 Banogu had three tackles in the Horned Frogs’ 44-31 win over Oklahoma State: two for loss, and a strip sack which was recovered by TCU. He was constantly wreaking havoc in the Cowboys’ backfield, bothering quarterback Mason Rudolph. It’s rare that we reward defense in the Big 12, but Banogu deserves some accolades after Saturday’s performance.

The redshirt sophomore, a converted quarterback, had just 20 career receptions coming into today. During the Wolfpack’s upset of Florida State, he added five more onto that total for 112 yards, including a 71-yard touchdown catch that kept NC State in the lead before halftime. Despite just five receptions, Meyers led the team in receiving yards, and his touchdown ended up being one of the key plays that ultimately made the difference in the game.

As the Red Raiders squeaked out a 27-24 win over Houston to move to 3-0 on the year, Allen was a difference-maker. The junior had 12 tackles, two quarterback hurries and an interception on Houston’s first drive. That led to a Texas Tech field goal, which ended up being the margin of victory. With Oklahoma State visiting Lubbock next week, the Red Raiders will get a real test. However, they’ve created some buzz heading into that one, at least for now.

You probably didn’t watch Idaho beat South Alabama in double-overtime, but Onunwor was a huge factor in getting the Vandals to 1-0 in Conference-USA play. The senior had eight receptions for 119 yards and a touchdown, including a 10-yard catch that brought the game into overtime. Prior to Saturday, Onunwor had just five receptions for 102 yards on the year. It’s fair to say he had a day he’ll remember for the rest of his life. 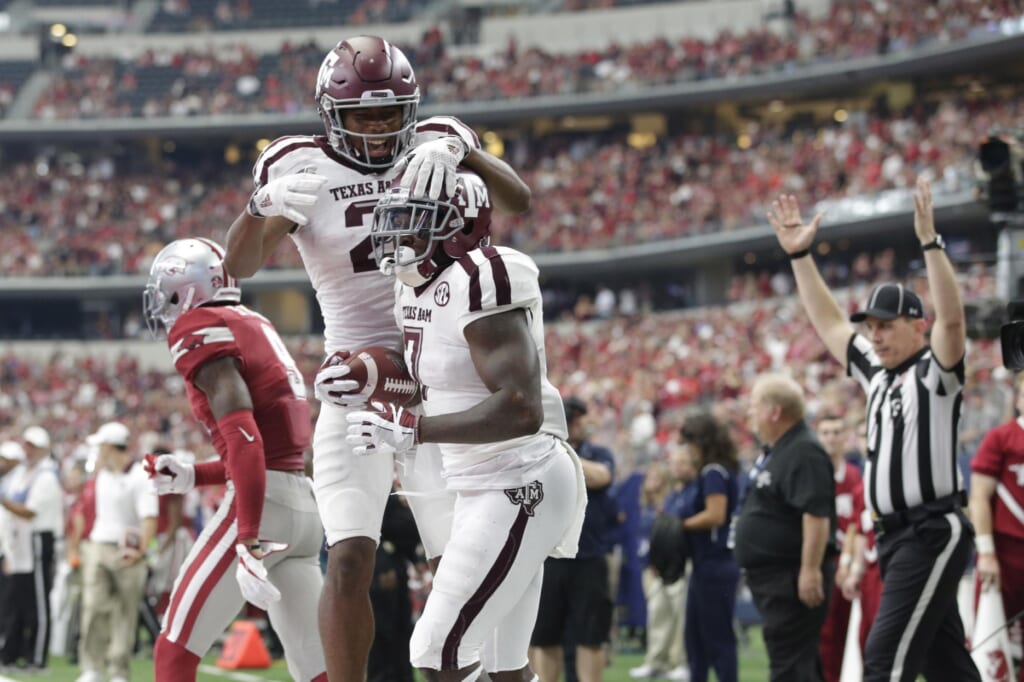 Ford’s performance took a backseat to quarterback Kellen Mond and wide receiver Christian Kirk (who did this), but that doesn’t mean we should give him a short shrift. The fifth-year senior went for 102 rushing yards on just 14 carries — that’s an average of 7.3. He also scored two touchdowns, both coming on runs of over 20 yards. It’s hard to go wrong when picking an offensive performer from a game that ended 50-43, but Ford had himself quite a game.

The Gamecocks needed a field goal at the last second to beat Louisiana Tech on Saturday. Edwards was a huge reason they didn’t succumb to the Bulldogs. He had six receptions for 122 yards. Not only did that lead the team, but Edwards’ 122 yards were more than triple any other South Carolina receiver managed. Suffice it to say the Gamecocks struggled to move the ball through the air when quarterback Jake Bentley was throwing to anyone other than Edwards.

Godwin had just two receptions in the Bulldogs’ 31-3 rout over Mississippi State, but his first was perhaps the game’s most important. On Georgia’s first offensive play of the game, Godwin went for a 59-yard touchdown. That set the tone for what would become a dominant victory. The game didn’t take long to turn into a blowout, thanks in large part to Godwin.

It took a team effort for Oklahoma to overcome an onslaught on the road at Baylor, but Sermon should be applauded for his part. On just 12 carries, he had 148 yards (somehow less than his teammate Abdul Adams, who went 99 yards on one carry), and two touchdowns. That included a 34-yard touchdown run early in the fourth quarter. At the time, Oklahoma was up by just four points and it looked as if Baylor could win the game. However, that run put an end to those hopes. 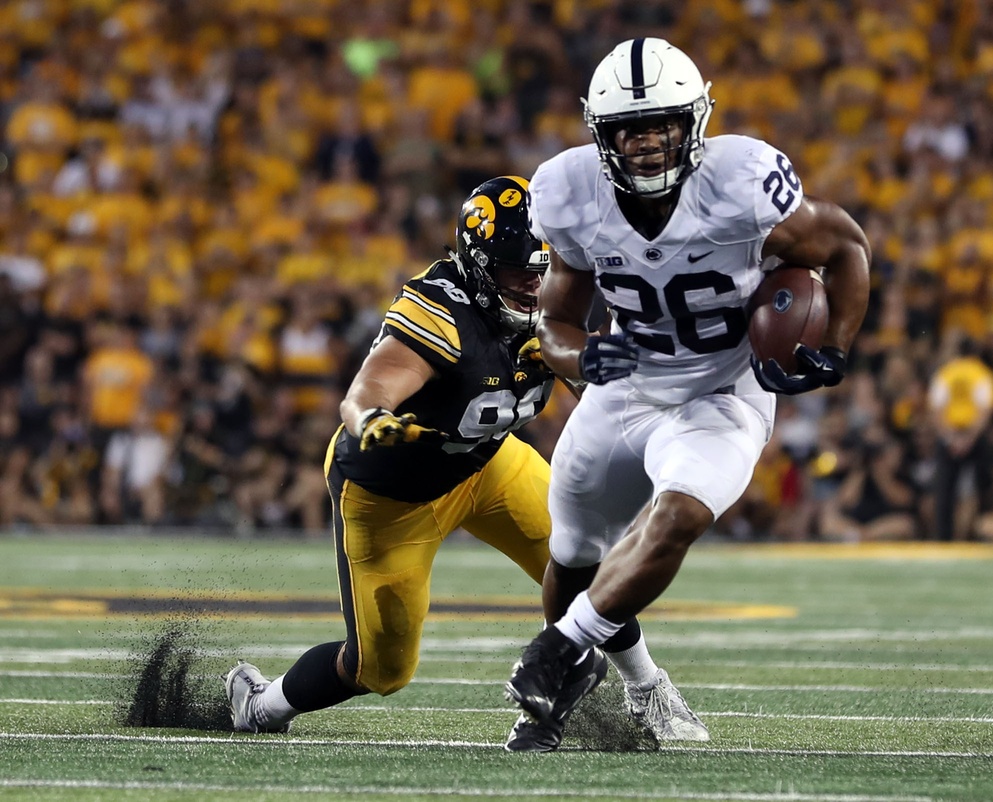 Before you start yelling that Barkley was clearly the best player in the game (and of the entire week) and thus does not qualify for this list, let me explain.

Barkley went for 358 all-purpose yards, a school record. He tallied 211 yards on the ground and 94 as a receiver. He was very literally their only source of offense. It’s impossible to overstate how important Barkley is to that team and how important he was on Saturday night.

Auburn looked like a dominant football team on Saturday night, as it trashed Missouri by the tune of 51-14. Davis, who had a 58-yard reception on the team’s first offensive play, set the tone. That ended up being his only catch of the night. However, it helped give quarterback Jarrett Stidham and the rest of the offense the confidence it sorely needed after scoring just 30 points in two weeks leading up to this one.

Given the state of the quarterback position for the Florida Gators, they need all they can get out of the run game. On Saturday night, when they avoided an upset by one point against the Kentucky Wildcats, Davis was a big contributor. The true freshman went for 93 yards on 21 carries. Though he didn’t get in the end zone, Davis was vital to Florida’s offensive success.