Holy moly. That’s pretty much how we can sum up what happened on Saturday in college football Week 4, as surprises and upsets ruled the day.

One of the top offenses in the nation had its wings clipped in a huge Big 12 upset.

Stunningly, Jimbo Fisher’s squad is winless heading into the final weekend of September after losing at home Saturday.

And who could have predicted Baylor of all teams would push Oklahoma to the limit?

One thing that wasn’t quite as shocking was the fact that Alabama served up some humble pie to a Vanderbilt squad that had distributed some ill-advised bulletin-board material last weekend.

This is what we learned from all the action.

Stunner in Stillwater shakes up the Big 12

As soon as the first snap of the game took place Saturday in Stillwater, one got the sense that Mason Rudolph and Co. were in for a real battle at home against Big 12 foe TCU. The Horned Frogs struck first, scoring a field goal on the game’s opening offensive possession. And once they went up 13-7 on the drive following Oklahoma State’s first score, they never looked back, winning 44-31 to stir things up in the Big 12.

The Cowboys only led (by one point) for a total of less than three minutes of game time. TCU’s defense deserves a ton of credit. It forced four turnovers (three interceptions and one fumble recovery) while holding Rudolph and his potent offense to just three touchdowns.

TCU’s running game owned the line of scrimmage, helping the Horned Frogs dominate the time-of-possession battle nearly 2-to-1 en route to 238 yards and four scores on the ground.

It was a stunningly convincing victory by the No. 16 team in the nation that will cause some ripples, both nationally and within the conference.

Florida State is in deep trouble 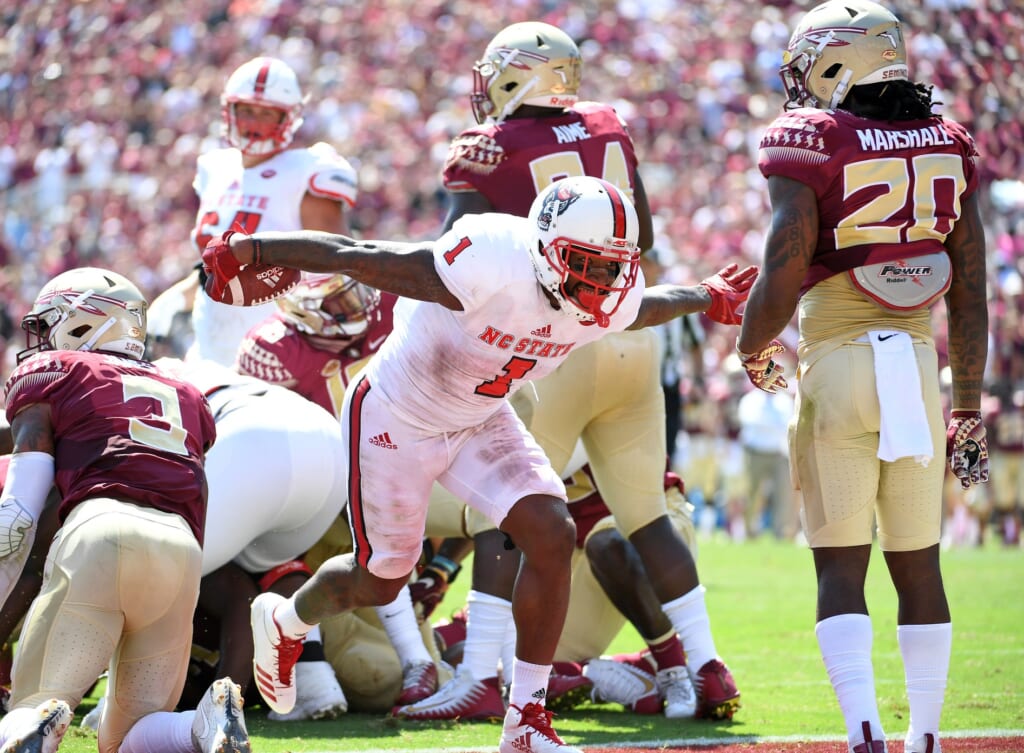 The Seminoles were justifiably heavy favorites to win at home against NC State on Saturday. While they did lose in Week 1 to Alabama and lost their starting quarterback along the way, they also had two weeks off due to Hurricane Irma and came into the game with what many considered to be one of the better defenses in the nation. The Wolfpack wrecked that narrative, gaining 365 yards and scoring 27 points in the upset win.

Derwin James — one of the nation’s top defenders — made an awful attempt at a tackle on a Wolfpack touchdown that he’ll no doubt hear about a lot in the film room.

The defensive lapses were notable. So also was the play of Florida State’s offensive line, which was wrecked by Bradley Chubb. Freshman James Blackmon did a pretty darn good job overall, but he lost a fumble in the first half and was getting hammered all game long.

Now at 0-2, it’s quite possible the Seminoles will enter Week 5 as an unranked team.

Oklahoma’s weakness exposed by Baylor, of all teams

Baker Mayfield did nothing wrong. He was his usual, efficient self, completing 13-of-19 passes for 283 yards with three touchdowns. But up until the fourth quarter, Oklahoma was on upset alert against a Baylor squad that came into the contest as four-touchdown underdogs.

The Sooners ended up winning, 49-41 thanks to a punishing running game that was led by freshman Trey Sermon, who did almost all of his damage in that final quarter.

But the real story here is how Baylor quarterback Zach Smith shredded Oklahoma’s secondary. The Sooners haven’t faced a quarterback who was capable of doing what Smith did until Saturday when he did it. The sophomore was on fire, completing 33-of-50 passes for 463 yards and four touchdowns. If the Sooners don’t get their pass defense figured out, then they won’t run the table in the uber-exciting Big 12.

Way to get right, J.T. Barrett

Okay, so he did it against lowly UNLV. We get that. But my goodness, J.T. Barrett had himself a phenomenal first half at home against the Rebels. We’ve been critical of Barrett’s performance in the past few weeks, and let’s be honest he deserved it. Saturday he went 12-of-17 passing for 209 yards and five touchdowns. That’ll get you back on track.

In total, Ohio State gained 664 yards and scored 54 points in the blowout win, which gave Urban Meyer plenty of opportunities to get his backups involved in the second half.

Record-breaking day for Lamar Jackson keeps him in Heisman contention 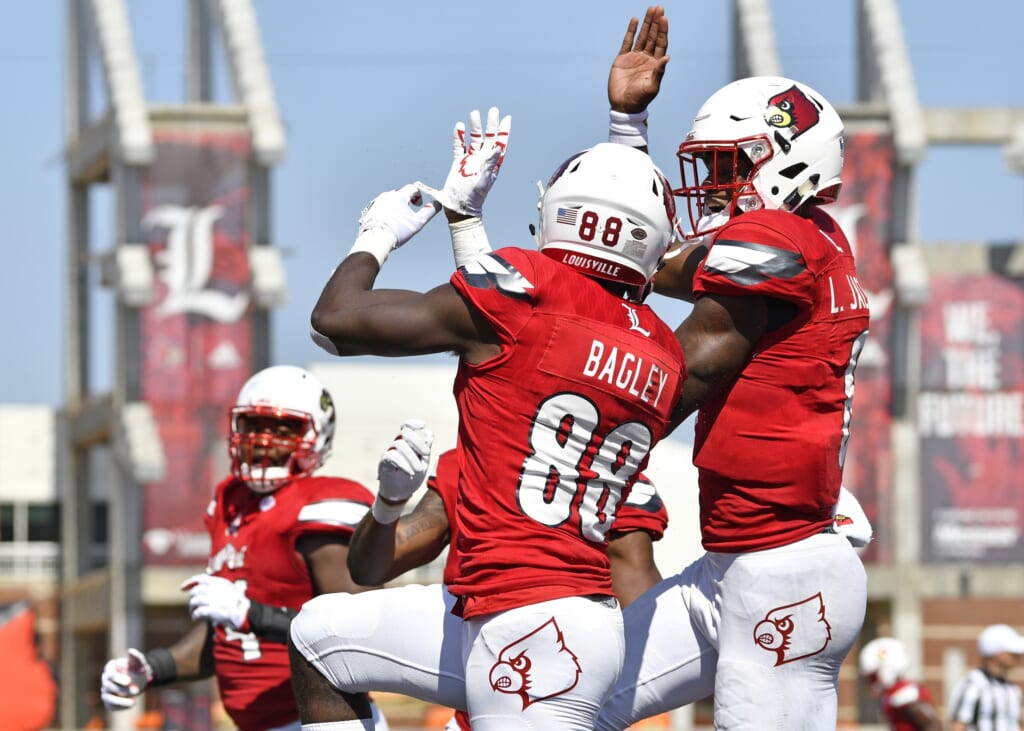 With three total touchdowns on Saturday at home against Kent State, Lamar Jackson broke Louisville’s all-time touchdown record, previously held by Chris Redman. He led the charge with 333 total yards in the 42-3 blowout win. There were a few mistakes by the talented quarterback, however, that should be cause for concern. Jackson threw two interceptions and lost a fumble. Against good teams, those turnovers typically mean the difference between winning and losing.

That said, though through four games Jackson is on pace for 5,172 yards and 42 total touchdowns before bowl season. Because of that, he is still firmly entrenched as one of the favorites to win the Heisman at the end of this season.

On the road against a Houston squad that features a dangerous defensive front, the Red Raiders employed a dominating rushing attack that was just good enough to propel them to a 3-0 start to the season. Justin Stockton and Tre King combined for 200 yards on 19 carries, and Desmond Nisby punched in a score at the goal line.

Combined with Oklahoma State’s loss, this win shakes things up in the very interesting Big 12. We’d be shocked if Kliff Kingsbury’s squad wasn’t among the top 25 heading into Week 5.

Vandy learns not to poke the bear

As we touched on leading up to the weekend’s action, Vanderbilt defensive lineman Nifae Lealao boasted last weekend about Alabama being next up for the Commodores. It probably wasn’t the smartest move by the young man, who got served up a healthy portion of humble pie Saturday at home.

The Crimson Tide put together their most complete game to date this season. The offense racked up 677 total yards and the defense held Vanderbilt to just 78 total yards in the 59-0 shutout win. There’s a lesson to be learned here: Next time don’t give Alabama bulletin-board material.

We sure hope Wilton Speight is alright after leaving Saturday’s game with an injury that required X-rays. That said, it’s not hard to see that Michigan’s passing offense got a shot in the arm once John O’Korn came into the game to replace him. O’Korn averaged 10.4 yards per attempt and threw a touchdown pass in Michigan’s 28-10 win over Purdue. Yes, he also threw an interception, but Speight hasn’t been a bastion of ball security this year, either.

We’ve said for a while that Speight appears to be the weakest link on an otherwise pretty decent Michigan squad. You hate to see players lose jobs due to injury, but at this point even if Speight is healthy heading into Week 5 Jim Harbaugh owes it to himself and his offense to see what O’Korn can do. 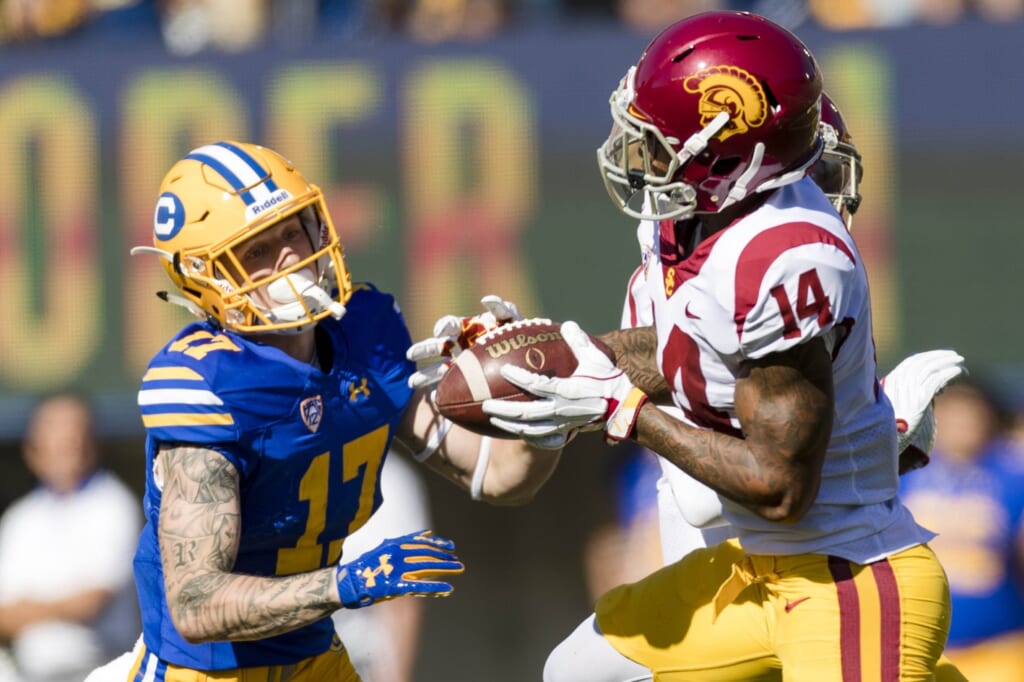 Sam Darnold threw an interception for the fourth game in a row, and Cal’s defense did a very respectable job holding the potent USC rushing attack to just 3.9 yards per carry in Berkley on Saturday.

It wasn’t until the fourth quarter that the Trojans ever had a lead, and they owe it all to their defense, which has been suspect at times this year. USC’s defense forced six turnovers in this game, and it forced three interceptions in consecutive drives as Ross Bowers succumbed to pressure late in the fourth quarter.

In the end, USC heads back down to Southern California with its undefeated record intact thanks to a big win that was anything but easy.

One of the biggest games this weekend took place in Athens as Georgia hosted Mississippi State in the battle of the Bulldogs.

Fresh off a dominant win over LSU, Mississippi State suffered through a huge letdown performance. But all credit goes to the home team for the way it methodically dispatched its opponent.

Georgia’s defense forced Nick Fitzgerald into two interceptions, freshman quarterback Jake Fromm was ruthlessly efficient when he got his chances through the air and the Bulldogs rushed for 203 yards and two scores. In the end, the scoreboard read 31-3 in favor of the home team, and it never even felt that close.

Saquon Barkley is the best player in college football

We’ve been saying this for a while now. But Saquon Barkley proved he’s the best player in the nation with a prime-time performance we won’t soon forget against a tough Iowa defense. He broke a Penn State record for all-purpose yards (386) and quite honestly wasn’t used enough on the ground early on.

Barkley was so good that Ezekiel Elliott called him “unreal” and he nearly broke Twitter after a ridiculous hurdle move in the fourth quarter.

Best yet, Barkley single-handedly kept Penn State in this game until Trace McSorley finally amended his previously poor behavior and led a phenomenal last-minute drive to win the game, 21-19, with a tremendous throw as time expired (watch here).

Don’t be surprised if this Penn State stud ends up moving up the Heisman rankings the closer we get to December. He’s already up there as one of the heavy favorites. And James Franklin will have to lean on his star running back more as the competition in the Big Ten heats up.