Aldon Smith was released by the San Francisco 49ers after his fifth arrest in three years, and there is a chance his NFL career could be over. Smith has Hall of Fame potential, yet his personal demons have crippled his chances of success.

Such a waste of talent. He could have been one of the game’s all-time greats, yet it appears alcoholism has its talons so deep inside Smith that he cannot break the cycle of addiction. There is still some hope for him, but at this point football isn’t even a consideration. Barring a serious turnaround, he’s done in the NFL.

Smith isn’t unique, though. There have been many players to enter the NFL with the potential to become a legendary star, only to have their own off-field issues cataclysmically ruin their careers.

These upcoming players top the list of players whose talent was wasted because they couldn’t overcome their off-field issues.

All you need to know about Williams’ potential can be summed up in the absurd amount of draft capital Mike Ditka, the head coach of the New Orleans Saints, gave up to land the running back. Ditka gave up all his draft picks in 1999 to trade up to the No. 5 spot and land Williams.

Coming out of Texas, Williams was as hot as a ball of fire. He tallied an unbelievable 4,017 yards and 52 rushing touchdowns in his final two years at college. That’s astounding.

Unfortunately for Williams, and for the teams he played for, he could not stop smoking marijuana. He ended up failing three drug tests over the course of his career. He also abruptly decided to retire in 2004 after his second failed test, and his career never really took off when he decided to return a year later.

In total, Williams still managed to gain over 10,000 yards in his career, along with 66 touchdowns, but he never did completely commit to the game of football after college. He could have been one of the all-time greats, but psychological issues and drug addiction kept him from fulfilling his potential. 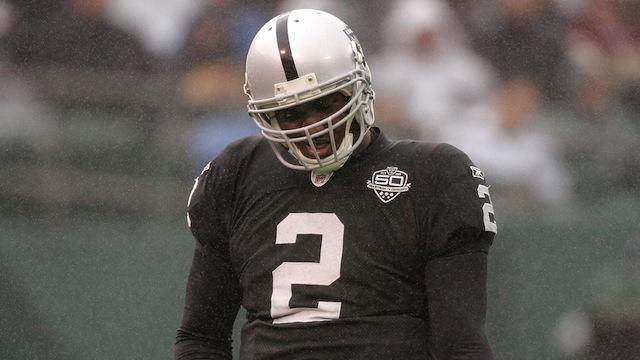 When talking about all-time NFL draft busts, Russell usually tops the list, along with another quarterback in our lineup.

Drafted No. 1 overall in 2007, the strong-armed quarterback was blessed with unlimited physical potential. He could make every throw known to mankind and had athleticism to boot—similar to Cam Newton, in this respect.

Sadly, Russell never took his responsibilities as a franchise player seriously, showing up late for meetings and generally not doing what it takes to become successful in the NFL. Furthermore he lacked the fire to keep himself in shape during the offseason and earned the “lazy” label.

Russell finished his career with a dismal 7-18 record, throwing just 18 touchdowns and 23 interceptions.

Boston’s career got off to a tremendous start, but it soon fizzled into oblivion.

Drafted No. 8 overall in 1999 by the Arizona Cardinals, Boston totaled 209 receptions for 3,227 yards and 17 touchdowns in his first three years. He missed half of the next year due to injury and then signed a massive (at the time) seven-year deal worth $47 million with the San Diego Chargers.

Everything was looking up…and then it all came crashing down.

Head coach Marty Schottenheimer ended up suspending Boston for a game during the 2003 season, due to an altercation with the team’s strength and conditioning coach. After the season the Chargers traded Boston to the Miami Dolphins for a measly sixth-round draft pick because the team was “concerned about Boston’s standoffishness and questionable practice habits.”

He then tested positive for steroids and was suspended four games by the league and additionally was busted for a DUI in 2007, and he never took another snap after limited action with Miami in 2005.

Young NFL fans likely have never heard of Schlichter, but he was considered to be an outstanding prospect coming out of college. Drafted No. 4 overall out of Ohio State in 1982 by the Baltimore Colts, expectations were sky high for the two-time Heisman finalist.

But compulsive gambling ruined his NFL career before it ever really got started. Schlichter washed out of the NFL in three years, during which time he built up crippling gambling debt. After his NFL career was at an end, the former star athlete committed dozens of felonies, including forgery, fraud and theft.

He spent time in jail during the 1990s and 2000s before receiving a huge judgement against him in 2012, resulting in an 11-year sentence for “scamming participants in what authorities called a million-dollar sports ticket scheme.” 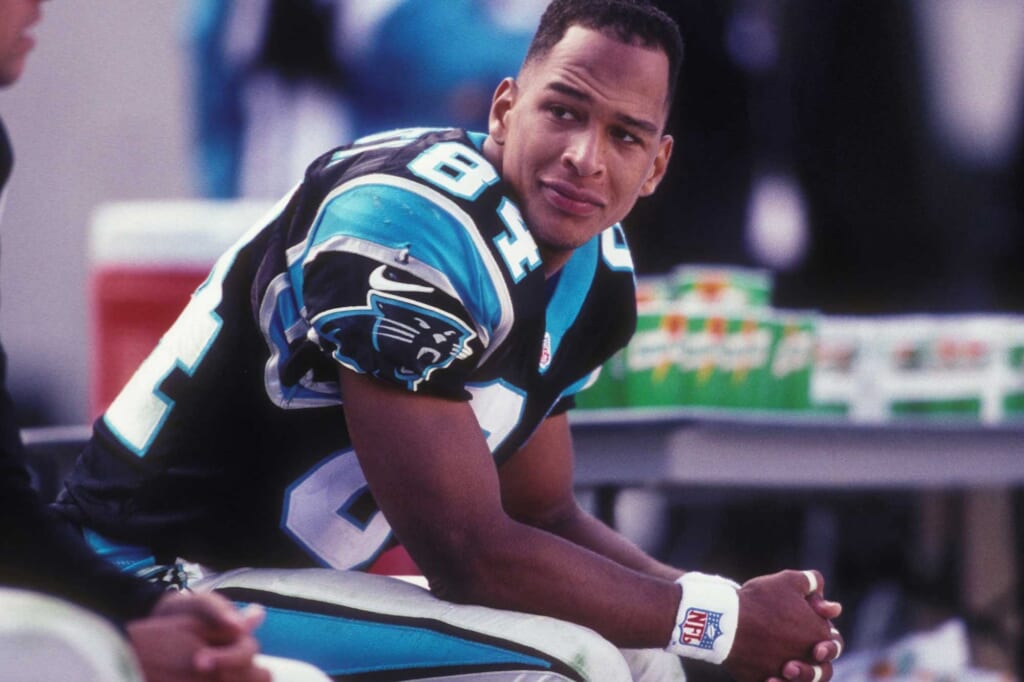 This is one of those stories where all you can do is just shake your head.

Carruth entered the NFL in 1997 out of Colorado as a promising first-round selection of the Carolina Panthers. He performed admirably as a rookie, catching 44 passes for 545 yards and four touchdowns—the last four he ever caught in the league.

After missing most of the 1998 season with a broken foot, Carruth played in six games in his third year before news of a terrible tragedy struck—one he had perpetrated. He murdered his girlfriend, who was eight-months pregnant with his child. The child survived but suffered permanent brain damage after being without oxygen for 70 minutes.

Carruth attempted to evade police but was ultimate captured. He is now serving a life sentence for his crime.

And here we find Russell’s equal in terms of all-time draft busts.

There was much arguing amongst football experts as to which player—Leaf or Peyton Manning—deserved to go No. 1 overall in the 1998 NFL Draft. As we know, Manning went to Indianapolis first, and the San Diego Chargers were thrilled to land Leaf at No. 2 overall.

Unfortunately for the Chargers, Leaf was an immature baby who wouldn’t be told what to do and he imploded as the face of the franchise. Maybe the team should have had a clue after Leaf had to be fined for missing the final day of the league’s rookie symposium.

He quickly developed a bad reputation as a hothead and infamously blew up at a reporter in the Chargers locker room. Poor work ethic, along with his unreasonable attitude, led to a quick descent into NFL irrelevance. Leaf ended up starting just 21 games in three seasons, compiling a record of 4-17 while throwing just 14 touchdowns and a whopping 36 interceptions.

After trying to clean up his life, which included coaching a high school team, Leaf ended serving time in prison for stealing drugs.

Made famous by the EPSN 30 for 30 episode entitled The Best That Never Was, Dupree was as naturally gifted as any athlete who has ever set foot on the gridiron.

After bursting onto the national scene as a freshman at the University of Oklahoma, Dupree suffered a concussion in his sophomore campaign and wasn’t seen for a week after that game. He was found once again in Mississippi and announced he’d be transferring to the University of Southern Mississippi. Unfortunately for him, the rules at the time forced him to therefore sit out essentially two seasons, and he ended up quitting after a few months and never stepped foot on the field as a college player.

After a dodgy stint in the USFL, Dupree was convinced by Marcus Allen to try the whole football thing again in 1990 after he’d been out of the game for five years. He had to lose 100 pounds in just three months, and after he did, he signed a deal with the Los Angeles Rams. He only received 68 carries in his NFL career, but everybody who was associated with him throughout his early career must surely have wondered what could have been. 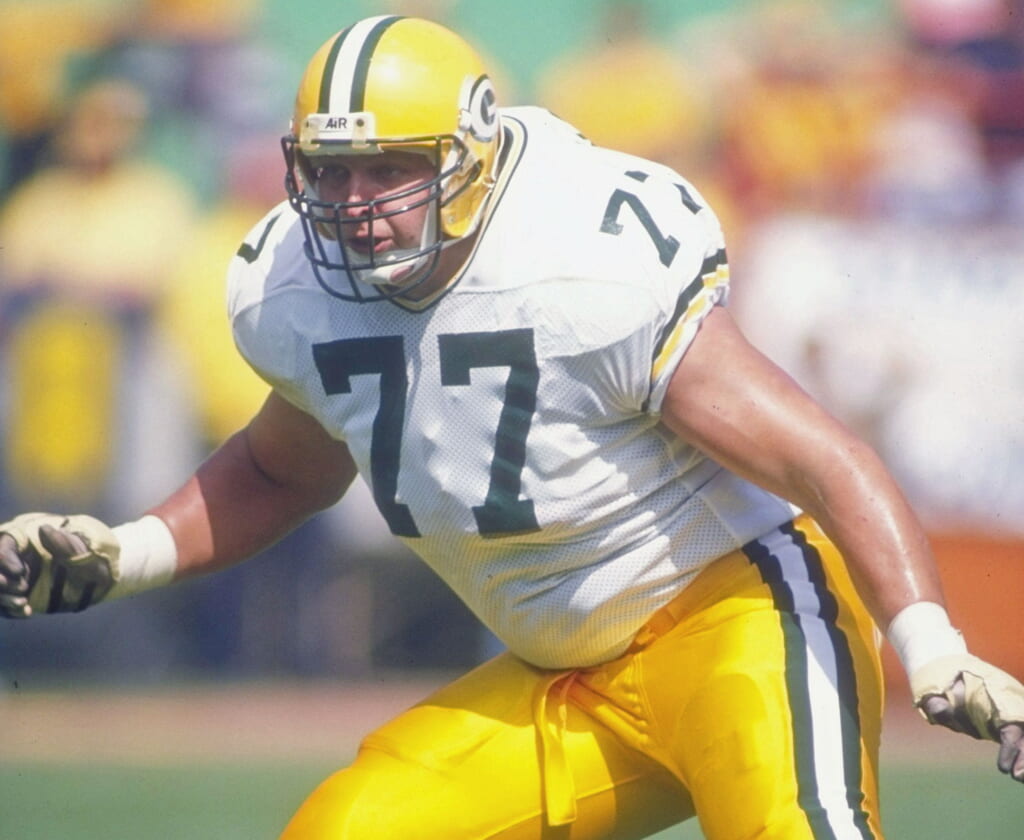 Mandarich was supposed to become the greatest offensive lineman in NFL history. He was drafted No. 2 overall in 1989 by the Green Bay Packers and was known for his incredibly physique.

Though he did start 63 games in his six-year career, Mandarich never played like a top pick and subsequently was never voted to a Pro Bowl or received any similar honors.

We all found out why he had such a stunning body in 2008, when Mandarich finally admitted his long-suspected steroid use. In addition to the steroids, which ruined his career, he spent five years away from the game dealing with drug and alcohol addiction before coming back in 1996 for a three-year stint with the Colts.

Legendary head coach Dick Vermeil called Phillips the “best running back he ever had.” This statement should tell you all you need to know about how good Phillips was on the field. Off it, not so much.

A long line of bad off-field troubles plagued Phillips during his short tenure in the NFL, including assault. He was ultimately sentenced to 31 years in prison after hitting three teenagers with his vehicle. Making matters worse, he was convicted of assaulting his ex-girlfriend, and then while incarcerated he was suspected of killing his cellmate.

It doesn’t get much darker than this sad story.

Smith set a 49ers franchise record with 19.5 sacks during his second season and racked up 33.5 in his first two seasons. Blessed with the potential to become an all-time great, things were looking terrific towards that end until the first of his five arrests occurred in 2012.

Here’s a rundown of his off-field transgressions, which ultimately led to his release on Friday, August 7.

Aldon Smith's arrest Thursday is latest of off-field incidents dating back to 2012. pic.twitter.com/wUcLtui2Gn

A common theme for Smith is alcohol, which has doomed the lives of many who are susceptible to addiction. After being released by the 49ers, Smith’s career might be over.

If so his short, sad career will go down as one of the biggest wastes of talent in NFL history.