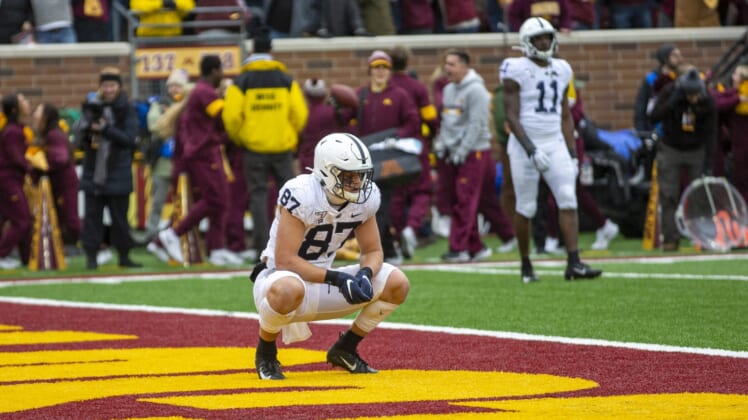 College football Week 11 lived up to all the hype. Just days after the first College Football Playoff rankings were released, two of the top-four teams in the nation suffered their first loss of the year.

The losses by Alabama and Penn State highlight this week’s list of upsets. Plenty of other fan bases are wallowing in misery after a wild weekend of action as well.

These are the 10 biggest disappointments from college football Week 11.

Knights get pwned in Tulsa

Coming into Friday night’s game, Tulsa had lost five straight and UCF was on a three-game winning streak. So it wasn’t surprising in the least that the Knights were favored to win by 17 points.

Rather than extend their streak, though, the Knights were outplayed by the Golden Hurricane. Quarterback Dillon Gabriel threw two bad interceptions and got banged up an awful lot as his offensive line failed to contain the Tulsa pass rush, enduring six sacks. UCF’s defense was a wreck as well, giving up 353 yards while teammates fought one another late in the game.

In the end, the Knights went back to the state of Florida with their third loss of the season as Tulsa pulled off the stunning 34-31 upset win.

Chad Morris has to go, Arkansas

The Arkansas Razorbacks, already mired in a putrescent bog before Saturday’s game, didn’t bother showing up for yet another home game and got blown out once more. This time, it was Western Kentucky doing the deed. The Hilltoppers were up 35-7 by halftime and walked out of Razorback Stadium with a 45-19 victory.

This has to be the last straw for head coach Chad Morris.

Since taking over for Brett Bielema, Morris has gone 4-17 and has zero SEC wins. He’s not bringing talent into the program through recruiting and has in fact lost plenty of it with players leaving left and right lately.

It will cost the university roughly $10 million to buy out the rest of Morris’ contract. But at this point, the program needs new leadership if it is going to find a way out of its current situation.

Penn State came into this pivotal game ranked ninth in the nation in total defense (280 yards allowed per game) and second in scoring defense, allowing just 9.6 points per game. With that in mind, it was not surprising in the least that many wondered if the Golden Gophers could do anything of substance offensively against the Nittany Lions.

The Minnesota offense decimated this unit with amazing touchdown receptions, racking up 199 yards in the first quarter and 321 yards by halftime while taking a 24-13 lead. That lead was tested late (thanks in part to a brutal miss by the refs), but the Golden Gophers continued to play outstanding football en route to a stunning 31-26 victory, piling up 460 yards in the process.

This shocking loss shakes up the College Football Playoff rankings and may have knocked the Nittany Lions out altogether with the matchup against Ohio State looming in two weeks.

Where art thou offense, Vandy?

It’s not surprising that Vanderbilt was beaten by Florida Saturday. The Commodores could have put up more of a fight, though, especially on the offensive side of the ball.

Vanderbilt ended the game with just 128 total yards from scrimmage and 12 first downs. Florida’s defense is very good, to be sure. Yet this showing was just abysmal, and it led to a 56-0 blowout loss after Vanderbilt’s defense held the Gators to just 14 first-half points. As the offense continued to stall, the defense simply broke in the second half.

Not for the first time this year, the Michigan State Spartans choked in a big way at home with a brutal loss to Illinois in front of their loyal fans.

Saturday’s meltdown was truly shocking. The Spartans had a 31-10 lead entering the fourth quarter. They ended up losing 37-34, allowing 27 points to the Illini in that final period. The onslaught started on the first play of the fourth quarter, as Brandon Peters found Josh Imatorbhebhe for an 83-yard touchdown.

From there, the Spartans fell apart completely. Brian Lewerke threw a ghastly pick-six, the Michigan State defense gave up two more touchdowns and that was that.

There was a lot of hubbub this week leading up to the game after MSU athletic director Bill Beekman made it clear that head coach Mark Dantonio is not going to be fired. But after another big loss like this, this program is clearly headed in the wrong direction.

Leading up to this battle between ranked teams, we pointed out that they are built similarly on both sides of the ball. On Saturday, that played out in many ways but with one glaring difference. Iowa couldn’t establish the run game the ball against Wisconsin’s stout defense, whereas the Badgers could not be stopped when it was their turn to pound the rock.

Jonathan Taylor went off. The Heisman candidate has struggled in recent weeks but was a juggernaut during Saturday’s game, rushing for 250 yards on 31 carries (8.1 yards per tote). Wisconsin’s offensive line absolutely dominated the line of scrimmage paving big lanes for Taylor and the other backs. In the end, the Hawkeyes dropped their third game of the season in a must-win contest, allowing 300 yards of rushing offense.

K-State lost battle of the trenches

When Skylar Thompson found Malik Knowles for a 70-yard touchdown reception in the first quarter, it appeared the Wildcats would be well on their way to a huge game offensively against a Longhorns defense that’s been really bad this year. The Wildcats dominated the first quarter, going up 14-0.

Then, the offense fell apart completely, losing the battle of the trenches as Texas’ defensive front shut down the run game (51 yards on 26 carries) and kept Thompson scrambling on passing downs. During the final 45 minutes of the game, Kansas State managed just three points on offense — their third touchdown coming by way of an electric 98-yard kickoff return touchdown by Joshua Youngblood.

On the other side of the ball, the Longhorns got into a groove running the ball and regularly pushed the Wildcats around en route to piling up 214 yards and two touchdowns on the ground. Then, to cap it all off, Texas finished the game with a winning field goal after grinding out a 13-play, 67-yard drive.

Wake Forest gets blown out by the Hokies

The Demon Deacons landed at No. 19 overall in the College Football Playoff rankings heading into college football Week 11. They had just one loss on record — a 62-59 barn burner against Louisville — and were favored to win on the road against Virginia Tech. Instead, Wake was decimated by the Hokies, losing 36-17.

Quarterback Jamie Newman threw two costly interceptions in the second half that turned into 10 points for Virginia Tech. Wake’s defense went limp in the final two quarters, allowing the Hokies to score 30 of their 36 points in the game. It was ugly.

There’s a chance that Wake Forest got caught looking ahead to next weekend’s road game against Clemson. If so, that’s a shame, because now that game has lost some of its luster.

‘Bama gets rolled by LSU

From the moment that Tua Tagovailoa had a fumble slip out of his normally sure hands on the game’s opening drive, it was clear that it wasn’t Alabama’s day. Sure, the final score (46-41) makes it seem like a close contest, but in all three phases of the game the Crimson Tide made mistakes that led to their first loss of the season.

Tagovailoa, who was clearly not 100%, threw an awful interception in the first half and was responsible for both of Alabama’s turnovers. The normally sure-handed Jerry Jeudy dropped not one, but two touchdown passes. Alabama’s defense could not make a stop in any key moment of this game, ultimately surrendering 559 yards. Jaylen Waddle had one of the most electric plays of the game but also made a huge mistake with a fair catch at the 4-yard line in the second half. Offensive lineman Landon Dickerson lost his cool with a dirty hit at the end of the first half that led to an LSU touchdown and ultimately an insurmountable lead.

The second-half efforts of Tagovailoa and running back Najee Harris gave the Tide a fighting chance. but the mistakes piled up and were too many to overcome. Head coach Nick Saban can’t be pleased, and if the defense doesn’t improve there’s no way the Crimson Tide win a title this season.

The Chase Young situation is absurd

One of the nation’s best players was unable to suit up for his team in Week 11. Chase Young is reportedly facing a four-game suspension for taking a loan from a family friend so that his girlfriend could fly to the Rose Bowl last year to watch him and the Ohio State Buckeyes play.

Young himself admitted he took the loan last year, and that he paid it off.

Bruce Feldman of The Athletic reports the person who loaned Young the money is not an NFLPA-certified agent, contradicting some early reports on the matter.

Regardless, it’s utterly asinine that the NCAA is going after a young man for something like this. He didn’t sell anything. He didn’t try to profit from his image or likeness. He found a way for his significant other to watch him play a game, and then repaid the loan.

Suspending him for any amount of time is absurd.

The silver lining here is that NFL teams won’t care about this and that Young will soon be playing for a ton of money on Sundays.