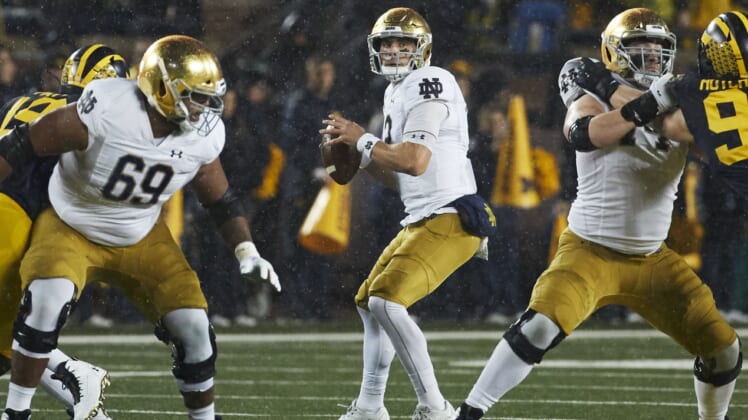 My goodness things got weird in a hurry Saturday as college football Week 9 featured some stunning upsets and massive disappointments.

The No. 5 team in the nation was downed by an unranked squad early. One of the top Heisman contenders laid an egg in a huge game. The Longhorns showed once more that they most definitely are not “back.”

These are among the most disappointing things that took place around the nation in college football Week 9.

Taylor got plenty of opportunities to make plays Saturday against the Buckeyes. He touched the ball 21 times, with 20 carries and one reception, but managed just 57 total yards from scrimmage and was held out of the end zone for the first time all year. Without Taylor racking up first downs and touchdowns, Wisconsin’s offense was absolutely stymied in a blowout loss.

Perhaps we should have seen the writing on the wall last week when Illinois(!) piled up 315 yards and 24 points in a stunning upset. Still, it was truly astonishing to see a Wisconsin defense that was so indomitable earlier this year get picked apart by the Buckeyes in Week 9.

The Badgers were downright bullied by Ohio State’s offense Saturday. The Buckeyes racked up 264 yards on the ground, averaging 5.3 yards per carry. They were led by J.K. Dobbins, who had 163 yards and two rushing scores. Ohio State converted a stunning 9-of-14 third-down attempts. And, of course, the Buckeyes put 38 points on the board in a blowout win over their rival.

Leading up to the games in Week 9, we wondered if Oklahoma might do enough to convince voters to vault the Sooners over Clemson in the national rankings. Needless to say, after they were stunningly upset by Kansas State, that take aged poorly.

Oklahoma’s defense fell apart in embarrassing fashion Saturday on the road in Manhattan. The Wildcats ran all over the Sooners, racking up 213 yards on the ground while controlling the clock and keeping Jalen Hurts on the sideline as much as possible. Despite a furious comeback attempt that saw 18 points scored by the Sooners in the fourth quarter, Oklahoma lost by a touchdown after their onside kick recovery near the end of the game was deemed to have been aided by illegal touching.

This 48-41 stunner of a loss will drop the Sooners down the rankings in a big way. And it may have ultimately sunk the team’s chances at a playoff berth, though we all know crazy stuff is bound to happen down the stretch.

Sam Ehlinger didn’t bring his A-game (or anything remotely close to it) to Fort Worth Saturday. The Longhorns’ gunslinger had the worst game of his season by far, leading to a stunning 37-27 loss to TCU.

Early on, it was apparent that TCU’s defense was going to be a problem. Ehlinger threw his first interception late in the first quarter, leading to the first points of the game for the Horned Frogs. Things really fell apart in the second half, as Ehlinger was picked off three times for a grand total of four in the game.

All told, Ehlinger completed just 22-of-48 passes in the game. And while he did pile up 364 total yards from scrimmage, his mistakes were too many for the Longhorns (now 5-3) to overcome.

In the ACC, there’s Clemson, and then there’s everyone else. The Tigers have the ACC Atlantic division on lockdown and will almost assuredly finish the season with an undefeated record heading into the ACC Championship Game. Which team will they play? Flip a coin, folks.

Pitt had a tremendous opportunity Saturday to take a hold of the ACC Coastal with a home matchup against Miami. Instead, the Panthers lost, 16-12. At one point in the first half, they went interception, lost fumble, interception on three consecutive drives.

The ACC Coastal now has four teams with two conference losses vying for first place, as Virginia also lost to Louisville. It’s a mess, and in the end the team that does come out on top is going to end up being steamrolled by Clemson in the conference title game, anyway.

Brock Purdy collapses down the stretch

As we predicted, the game between Oklahoma State and Iowa State produced a ton of offensive fireworks. The game was all knotted up at 27-27 midway through the fourth quarter, and Brock Purdy had a chance to keep the Cyclones perfect this month with a strong finish.

That did not happen. Purdy threw interceptions in three of his final four drives in the game, including this dagger pick-six by Carlton Johnson.

Purdy passed for 382 yards in the game, but his final attempts were putrid. Now Iowa State drops to 5-3, including 3-2 in the Big 12, and still has huge games against Texas and Oklahoma coming up.

Bo Nix was the weak link for Auburn

The No. 9-ranked Auburn Tigers played a darn-good game on the road against No. 2 LSU. Their defense was outstanding, and the run game, spearheaded by D.J. Williams, was very effective.

Unfortunately, true freshman quarterback Bo Nix was a huge liability. Highly inaccurate, he was rattled by LSU’s defense and the pro-LSU crowd all game long.

The one thing Nix did well is that he limited turnovers — LSU’s only interception came late in the second quarter on a purposefully risky play. However, the freshman just couldn’t find his receivers and finished the game having completed 15-of-35 attempts for 157 yards with one touchdown and the pick. Not nearly good enough to beat a quality team like LSU.

South Carolina went from knocking off the No. 3 team in the nation to nearly knocking off No. 9 Florida last weekend to getting absolutely thumped in Week 9…by Tennessee?

The Gamecocks made the Volunteers look like ‘Bama on Saturday, losing by the blowout score of 41-21. Even worse, this game was their for the taking, as South Carolina went into halftime up 21-17, thanks in part to a remarkable play by Shi Smith.

Porous defense, and two huge lapses on special teams (Tennessee scored on a punt return, and a punt block returned for a touchdown) sealed the devastating loss.

The evening game featuring No. 24 Arizona State and UCLA was one we highlighted leading up to Week 9 because of the two young quarterbacks set to take the stage. Unfortunately, Jayden Daniels took far too long to get things going after getting banged up early, and the Sun Devils were taken out by a Bruins team that suddenly looks like it knows which way is up.

Even before Daniels was banged up, he wasn’t particularly sharp. Perhaps still feeling the effects of last weekend’s humiliating performance against Utah, he just didn’t have his best stuff until later in the the game when the outcome was already decided.

His counterpart, Dorian Thompson-Robinson, had much more help as the Bruins ran the ball at will against the Sun Devils’ defensive front. On both sides of the ball, Arizona State was outplayed by UCLA, leading to a 42-32 loss that will shoot the Sun Devils down the standings and out of the top-25.

Notre Dame no-showed the biggest game of the year

The No. 8-ranked Notre Dame Fighting Irish had a real chance to make a statement on the road against a beaten-up Michigan squad that’s stunk up the joint against other top-10 teams this year. Instead, Brian Kelly’s team came out flat in the biggest game of the year and got run out of the Big House in blowout fashion.

Defensively, Notre Dame was outclassed in every way as Michigan’s offensive line and running backs did whatever they wanted to.

Offensively, the Fighting Irish had an utterly forgettable night in Ann Arbor, headlined by a brutal performance from quarterback Ian Book. The only points they were able to put on the board until late in the fourth quarter came as a result of an awful penalty called against Michigan in the third quarter.

Notre Dame showed itself to be a pretender on Saturday night. It was an embarrassing performance by a team that should have at least put up a fight.