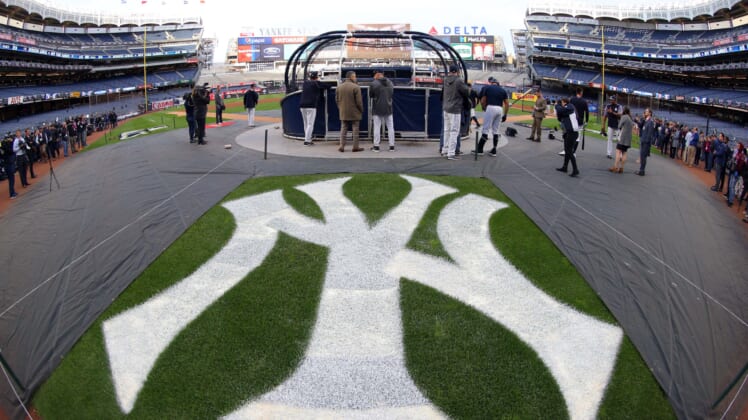 The New York Yankees failed to appear in the World Series in a decade for the first time since the 1910s. It’s a blemish on the reputation of a storied organization and a streak that the front office can’t allow any longer.

There is no greater need for New York than pitching. General manager Brian Cashman didn’t address it at the trade deadline and it cost him. Failing to sufficiently improve the rotation this offseason is unacceptable. Fans want action. Specifically, they want impact talent added this winter.

Fortunately, there are plenty of options available for Cashman to choose from. While the Yankees will undoubtedly face plenty of competition, the right moves can deliver a 28th World Series title to the city and fans.

First, we’ll take a look at the latest news and rumors surrounding the Yankees with in-depth analysis when news breaks. We’ll also highlight a few moves that New York should make this offseason to snap its World Series drought.

New York talking to Cubs about OF Kyle Schwarber

If you didn’t think the “Evil Empire” was already back this offseason, the Yankees could continue that this offseason with their reported trade talks for Schwarber.

The Yankees have been searching for a left-handed hitter to plug into their lineup and Schwarber fits the bill. The 26-year-old is coming off a career-best season with 38 home runs, 92 RBI and a .871 OPS. A move to Yankee Stadium could even help him post better numbers. New York could play him in either corner outfield spot or use him as its designated hitter. While both sides might only be talking right now, adding Schwarber to this lineup would make the Yankees even more dangerous in 2020.

Yankees reunite with Adam Warren on a minor-league deal

According to The Athletic’s Ken Rosenthal, Warren is returning to the organization where he enjoyed the greatest success in his MLB career. He underwent Tommy John surgery in September, so he’ll spend the next year rehabilitating and working his way back with New York’s medical staff, before hopefully returning to the mound in 2021.

It always seemed like a certainty Gardner would stay with the Yankees and now it’s official. This is the only team he’s known and as the longest-tenured Yankee, his voice carries to every player on the roster. While signing him doesn’t carry as much weight from a talent perspective as Cole, he can carry that type of impact in the clubhouse.

Oh, he’s a good player too. Gardner is a good fielder in left with the versatility to handle center, even with age. He also hit a career-high 28 home runs with a .828 OPS in 2019. Even if he regresses to a .750 OPS, his value on the diamond and in the dugout will be vital for New York in 2020.

According to The Athletic’s Ken Rosenthal, the Yankees are among the teams interested in the non-tendered reliever. Now that Treinen is available as a free agent, he should remain a target for the Yankees.

Rangers “intrigued” by possibility of acquiring Yankees’ 3B Miguel Andújar

According to MLB.com’s T.R. Sullivan, Texas is very interested in the possibility of trading for Andújar. While the 24-year-old could be available this offseason, the return is the biggest question for the Yankees.

All-Star pitcher Mike Minor would be New York’s target. He is owed just $9.5 million next season and is coming off a ’19 campaign with a 3.59 ERA and 8.64 K/9 in 208.1 innings. Texas wants to compete in 2020 in the debut of its new stadium, which complicates matters. Relief pitcher Jose LeClerc, who recorded a 4.33 ERA last season after recording a 1.56 ERA and 13.27 K/9 the year prior, likely wouldn’t be enough. The Yankees will listen, but right now there isn’t a great fit.

According to MLB.com’s Mark Feinsand, the Yankees are “chief among the suitors” for the southpaw. Hill, a submarine-style pitcher, isn’t eligible for arbitration until 2021. Specifically, the southpaw’s ability to generate grounders and miss bats at a high rate stands out to New York.

Hill’s delivery and sinkerball led to a 57.3% ground ball rate last year. He held opposing hitters to a .215 batting average and struck out 24.2% of batters faced. Hill also excels against left-handed hitters with a career .211/.276/.248 slash line allowed in 133 career at-bats.

Speaking to John Shea of The San Francisco Chronicle, New York’s general manager confirmed that the team would pursue Bumgarner. Given the southpaw’s postseason track record, he could be particularly attractive to the Yankees.

While Bumgarner’s 3.90 ERA last season wasn’t outstanding, he improved in the second half of the year. He lowered his batting average allowed from .259 to .228 after the All-Star Break and dropped his WHIP from 1.2 to 1.04. Bumgarner’s postseason success, a 2.11 ERA in 102.1 innings, is perfect for the Yankees. At a time when New York doesn’t always spend like it used to, Bumgarner becomes the likely addition for this offseason.

According to Joel Sherman of The New York Post, New York made a significant push to acquire Baltimore’s hard-throwing reliever. Given the Yankees’ desire to strengthen the bullpen this offseason, perhaps a deal can be reached for Givens this winter.

While Given’s ERA regressed from 3.99 in ’18 to 4.57 last year, he improved in other areas. He raised his K/9 from 9.27 to 12.29, lowered his BAA from .215 to .211 and saw his swinging-strike rate skyrocket to 15.8%. Givens does come with some issues to correct, notably his home runs allowed, but he could be acquired for a reasonable cost and become an excellent set-up man.

The Yankees love having a dominant bullpen to complement their rotation. It makes sense, especially in October, and the front office can take another step in this direction. Hader struck out 47.8% of the batters he faced with 37 saves and a 2.62 ERA in 75.2 innings, meanwhile, he’s arbitration-eligible for the next four seasons.

A deal could feature Andújar, who has the potential to be an All-Star hitter for Milwaukee, and outfielder Clint Frazier. The Yankees can include right-handed pitcher Luis Gil, the team’s No. 4 prospect, as well. New York can use its excessive organizational depth to acquire an impact, multi-inning reliever and take this bullpen to the next level.

New York moved on from Greg Bird after years of frustrations with his lack of durability. While Luke Voit will get opportunities next season, Smoak should be an easy target for the front office.

He is just a year removed from consecutive seasons with a .800-plus OPS. He’s also a switch-hitter that can benefit from the short porches in Yankee Stadium and could provide excellent power off the bench. While Smoak doesn’t hit for much outside of power, he posted a 15.8% walk rate in 2019 and could be a bargain for the Yankees.

New York swung for the fences and crushed it out of Yankee Stadium. Signing Cole gives this team an ace who can not only carry this rotation, but be the postseason star the fans desperately wanted. Of course, the outlook for this team doesn’t stop there, more moves can only strengthen this club.

A look at New York’s lineup shows that it’s still capable of carrying this team in a postseason. Judge, LeMahieu and Torres are MVP-caliber players, while Sanchez and Stanton will make cases for the All-Star team in 2020. The bottom of the lineup boasts a player capable of getting on base in the No. 6 spot with run producers behind him and plenty of depth on the bench.

Of course, pitching is where the new focus will be. Cole steps in as the best No. 1 starting pitcher in baseball, that’s all there is to it. Severino will be healthy heading into spring training and can thrive behind Cole as a co-ace.

If García proves he’s ready for a rotation spot in the spring, the Yankees have a Rookie of the Year candidate as their No. 5 starter. If he isn’t, J.A. Happ can fill the void until Garcia steps in or Domingo German’s availability for 2020 is decided following an investigation into domestic violence allegations.

A quartet of Ottavino, Britton, Hader and Chapman would be the best group out of a bullpen in years. The Yankees could rest Hader or Chapman on certain nights to keep everyone fresh for October.