Winnipeg, BC battle for berth in Grey Cup title game 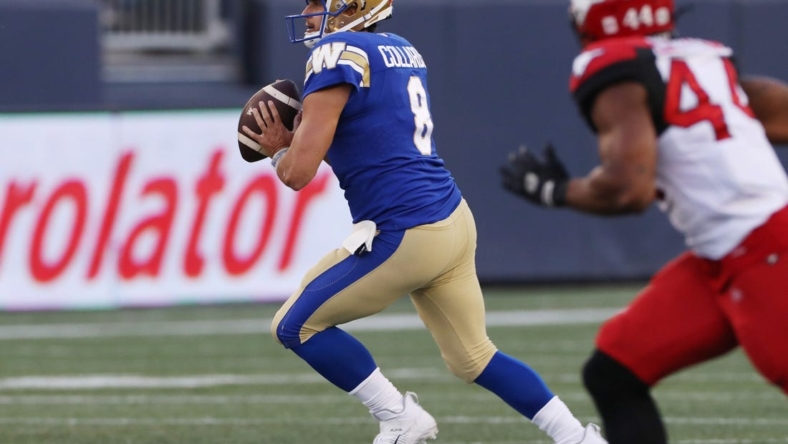 The Winnipeg Blue Bombers will continue their pursuit of a third consecutive Grey Cup championship Sunday afternoon when they play the visiting BC Lions in the Western final.

The Blue Bombers are trying to become the first team to win three straight Grey Cup finals since Edmonton won five in a row from 1978-82.

The winner will meet either the Toronto Argonauts or the Montreal Alouettes in the 109th Grey Cup final Nov. 20 at Regina.

“I think it’s great that people aren’t picking us to win because all the pressure isn’t on us, it’s on (Winnipeg),” Rourke said. “They’re supposed to win and they’re supposed to three-peat. It’s all about us. We’ve got nothing to lose and that’s a good place to be.”

The 24-year-old Rourke threw for 321 yards and two touchdowns in his first CFL playoff appearance Nov. 6, a 30-16 victory over the Calgary Stampeders at Vancouver. It was his first full game since sustaining a foot injury Aug. 19 that required surgery.

Collaros led the CFL with 37 touchdown passes and was second with 4,183 passing yards.

Wintry conditions are expected Sunday that could favor the home team. The Lions play home games under a retractable roof and Vancouver has a milder climate.

“I just don’t see it that way,” Blue Bombers coach Mike O’Shea said. “Sure, you’d like it to be, but I think I can recall one game in 20-something years that I saw someone playing (in bad weather) and it looked like they were really affected. I’ve been on teams that have come from Ontario out west, played in minus-15 (Celsius), minus-20 and won. You can’t rely on that. You have to rely on your own preparation.”

Said Lions coach Rick Campbell: “Talking to the guys; part of playoff football is that the weather doesn’t slow you down at all.”