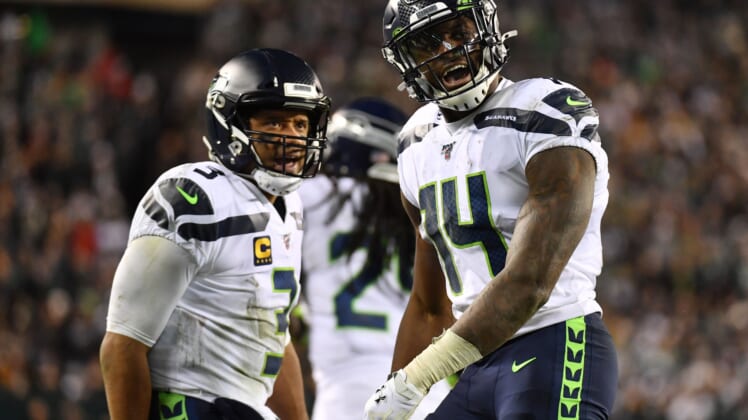 The Seattle Seahawks slugged out a wild-card win over the Philadelphia Eagles on Sunday to advance to the Divisional Round where they’ll face the Green Bay Packers.

Seattle went up 10-3 at halftime as the Eagles once again had to roll with a backup quarterback due to an injury to Carson Wentz. Then, in the second half they continued to do just enough to stay ahead of the injury-ravaged Eagles and walked out of Philly with a 17-9 victory.

These are the biggest winners and losers from the Seahawks’ wild-card win over the Eagles.

To be fair to D.K. Metcalf, this rookie has been sending a message to his critics all season long. Thanks to some questions about his agility, the Ole Miss product fell to the bottom of Round 2 during the 2019 NFL Draft, and he’s proven to be one of the draft’s biggest steals ever since.

On Sunday against the Eagles, Metcalf took the game over. The rookie caught seven passes for 160 yards, and his 53-yard touchdown in the third quarter was incredible. In the process, he broke the record for most receiving yards by a rookie in his postseason debut.

Needless to say, the 31 other teams that passed on Metcalf (twice) are probably wishing they had a mulligan.

You have to just feel awful for Eagles quarterback Carson Wentz, who was so excited to finally get his shot to lead Philly in a playoff game. Remember, they had to turn to Nick Foles the past two trips to the playoffs due to season-ending injuries to Wentz. Then, on Sunday early in the first quarter, the former first-rounder was knocked out of the game with a concussion on a hit from Jadeveon Clowney many believe was dirty.

The Eagles were already running with a skeleton crew due to an incredible rash of injuries on offense before Sunday’s wild-card game against the Seahawks. With Wentz knocked out of the game so early, this injury proved to be the proverbial straw that broke the camel’s back.

Winner: Quinton Jefferson did work inside

When Sunday’s wild-card game began, you would have been hard pressed to find anyone who predicted that Seattle’s star defender would be Quinton Jefferson. The former fifth-rounder out of Maryland had just 3.5 sacks in 14 regular-season games, after all. But against the Eagles, Jefferson was a force to be reckoned with.

Dominating the line of scrimmage, Jefferson had two tackles, two sacks and helped spearhead a defensive effort by Seattle that culminated with seven sacks and nine quarterback hits. Philly’s offense just never was able to find any kind of rhythm, and it was a huge reason the Seahawks are advancing.

Marshawn Lynch powered his way into the end zone, scoring his second touchdown in as many weeks. But outside of that, the Seahawks had a brutal day running the ball in Philly, tallying just 19 yards on 17 carries by running backs.

On the one hand, the Eagles had one of the best run defenses in the NFL. And Seattle is dealing with multiple injuries to starters, both at running back and on the offensive line. So, it’s not necessarily the end of the world that Seattle had no run game to speak of Sunday.

On the other hand, this could be a humongous problem for the Seahawks going forward. The Eagles were, by far, the weakest playoff team in the NFC. Another performance like this by the guys up front will likely doom this team to a Divisional Round exit against Green Bay.

As we just detailed, the Seahawks were exceptionally one-dimensional on offense Sunday. Despite that, and despite a valiant effort by the Philadelphia defensive front, Russell Wilson did what he’s been doing all season long and kept finding ways to make big plays for his team.

Wilson completed 18-of-30 passes for 325 yards with one touchdown and zero turnovers. He made his opportunities count, stayed with the hot hand (Metcalf) and racked up 45 additional yards on the ground to lead the Seahawks to victory.