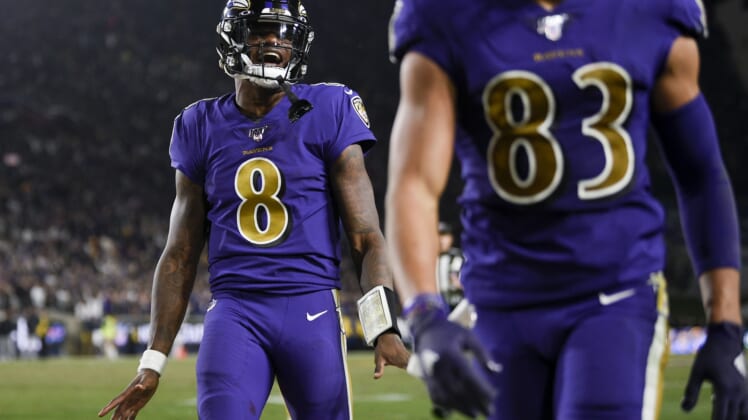 The Los Angeles Rams hosted the Baltimore Ravens on “Monday Night Football” to close out Week 12. Lamar Jackson and Co. treated the Los Angeles Memorial Coliseum like it was home, utterly destroying the Rams in their own building.

The Ravens jumped out to an early 14-0 lead and never looked back. They went into halftime up 28-6, and then in the second half continued to dominate. After four quarters, the Ravens moved to 9-2 on the season with a 45-6 win.

These are the biggest winners and losers from the Ravens’ blowout victory over the Rams on Monday Night Football.

That describes Lamar Jackson on Monday night, and quite honestly for at least the past month. This record-breaking quarterback is in the perfect system — one that accentuates all his best attributes — and plays with a supporting cast that complements his game.

During the first half against the Rams, Jackson threw three touchdowns (two to Marquise Brown), didn’t have a single one of his nine passing attempts hit the ground and rushed for 80 yards. He also went full “Madden” on yet another scintillating run.

Up big in the second half, Jackson continued to pour it on.

All told, the young superstar racked up 264 yards and five touchdowns before being pulled in favor of Robert Griffin III early in the fourth quarter — the game well in hand. With him in the game, the Ravens scored touchdowns. Every time.

Oh, and of course Jackson also made more NFL history in the process.

Loser: Jared Goff was not

Jared Goff got going a bit in the second quarter, but for most of the first half he looked rattled out there. He got the Rams into scoring range twice but had to settle for field goals. One of those missed opportunities was due to a brutal overthrow by Goff to Tyler Higbee, who was wide open for a touchdown.

Goff never did get comfortable. He finished the game with 212 yards, with most of it coming in garbage time, and tossed two interceptions on a night he and the Rams would rather forget.

One of the reasons the Ravens are so dangerous this year is that it’s not just about Lamar Jackson. Baltimore’s offensive line is big, physical and plays with a nasty streak. And running back Mark Ingram has been a huge factor since signing in free agency this past spring.

On Monday night against the Rams, Ingram imposed his will on Los Angeles’ defense. He punished defenders on every carry and consistently made positive gains.

Loser: Where was Aaron Donald?

Aaron Donald is one of the best players at any position in the NFL. Leading up to Monday night’s game, Donald was having another impressive season for the Rams.

Yet on a night in which his team needed him to provide a spark, Donald was nowhere to be found. Tallying just one solitary tackle and nary a single quarterback hit, Donald’s inability to make an impact was a big reason the Rams had no chance to win.

Winner: Marcus Peters got his revenge

Since being traded from the Rams to the Ravens last month, Marcus Peters has been nothing short of phenomenal. Already with two pick-sixes to his credit following the trade, he came into Los Angeles for this Monday Night Football showdown with something to prove to his former team.

Playing a solid game all night, Peters did get that chance to shine, picking off Jared Goff in the fourth quarter.

Meanwhile, Jalen Ramsey has failed to be a huge difference-maker for the Rams. Remember, the Rams only traded for Ramsey after moving Peters to Baltimore, and so far it seems like the Ravens got a steal while Los Angeles may regret those moves in a big way.

Rams defensive coordinator Wade Phillips is a legend. But on Monday night, he had no answers for the offensive game plan put out there by Ravens offensive coordinator Greg Roman, who’s like a kid in the candy store these days playing around with the talent pool in Baltimore.

In the first half, the Rams gave up 251 yards, 19 first downs, and 28 points. They allowed the Ravens to convert 3-of-4 third downs, and a fourth-down play that led to one of their touchdowns. By the end, the Ravens had piled up 480 and scored touchdowns on their first six possessions of the game.

Ben Volin of the Boston Globe shared his thoughts on the lopsided matchup, which echo my own.

Just a brutal game for Phillips and the Rams defense.