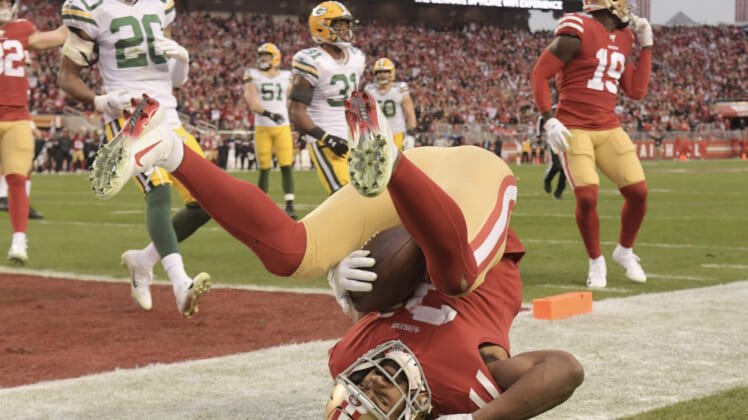 The San Francisco 49ers punched their ticket to Super Bowl LIV with a convincing 37-20 win over the Green Bay Packers Sunday in the NFC Championship Game.

After both teams got off to slow starts on their first offensive possession, the 49ers established their dominance on their second drive of the game — a six-play drive that went 89 yards and was a harbinger of doom for a Packers team that was sorely outmatched on both sides of the ball.

Aaron Rodgers would not go down without a fight and the Packers woke up offensively in the second half. Midway through the fourth quarter, after Aaron Rodgers threw his second touchdown of the game, Green Bay pulled to within two touchdowns, 34-20.

Then, the 49ers went on a 10-play drive that ended with three more points, icing the game for good.

These were the biggest winners and losers from the 49ers’ resounding victory over the Packers in the NFC Championship Game.

If you didn’t know about Raheem Mostert before Sunday’s NFC Championship Game, you do now. Largely unheralded on the national stage, Mostert had an absolutely monster game for the 49ers Sunday.

By halftime, Mostert had already piled up 160 yards and three touchdowns on just 14 carries, making NFL history in the process.

He seemingly was ripping off huge gains every time he touched the ball, and his 36-yard first-quarter touchdown run set the stage for what was a legendary performance. All told, this former undrafted Purdue product finished Sunday’s title game with 226 yards and four touchdowns from scrimmage, and he was the driving force behind San Francisco’s offense.

Just like we saw back in November, the Green Bay offense had no way to slow down the juggernaut 49ers defensive front. Even with Bryan Bulaga in the lineup this time, the explosive and talented defensive line practically lived in Green Bay’s backfield on passing downs.

Aaron Rodgers not surprisingly came back strong in the second half after being shut out in the first. But there was just way too much pressure up front by the 49ers. Rodgers turned it over three times — two interceptions and one lost fumble — and actually fumbled three times.

It wasn’t quite the bloodbath that the regular-season matchup was, but the Packers’ offense was absolutely outclassed by a 49ers pass defense that has been the league’s best all year long.

The 49ers were tight-lipped about whether Akhello Witherspoon or Emmanuel Mosely would start opposite Richard Sherman against the Packers Sunday. Just hours before the game began, Matt Maiocco of NBC Bay Area shared that he’d been told Moseley would get the nod.

That proved to be the right move. Moseley, a second-year former undrafted rookie out of Tennessee, was so clutch. He made four solo tackles, including one amazing tackle behind the line of scrimmage on a screen. And most importantly, Moseley picked off Rodgers in the second quarter, and the 49ers went up 27-0 on their next offensive possession.

It didn’t take long for the 49ers to impose their will on the Packers’ defense Sunday. Once Jimmy Garoppolo took an early shot to his surgically-repaired left knee, Kyle Shanahan almost completely abandoned the passing game, and the 49ers instead ran the ball right down the Packers’ throats for the remainder of the contest.

A highly physical contest, the NFC Championship Game saw the Packers lose star cornerback Jaire Alexander and starting safety Adrian Amos. Those injuries only hurt Green Bay’s chances of slowing down the 49ers. But even if they had been able to play a full game, the result likely would have remained the same.

The 49ers had a perfect game plan, and the players executed it perfectly. The Packers had no way to combat what was coming their way, and the result speaks for itself. San Francisco scored on six consecutive drives after going three-and-out on their opening possession. Game over.

Winner: Deebo Samuel did not play like a rookie

After an uninspiring first offensive possession, rookie receiver Deebo Samuel set the tone for the 49ers with two huge receptions, including a 30-yard gain he nearly took to the house after decleating a Packers defender.

Even though the 49ers pretty much abandoned the passing game after that drive, Samuel continued to be a huge impact player for the 49ers, making key blocks in the run game and wearing defensive backs with his relentless effort.

Samuel finished the game with 89 yards from scrimmage on just four touches. This kid just doesn’t play like a rookie. He hasn’t all season long. And now, as the 49ers move to Super Bowl LIV, he’s coming on stronger than ever.