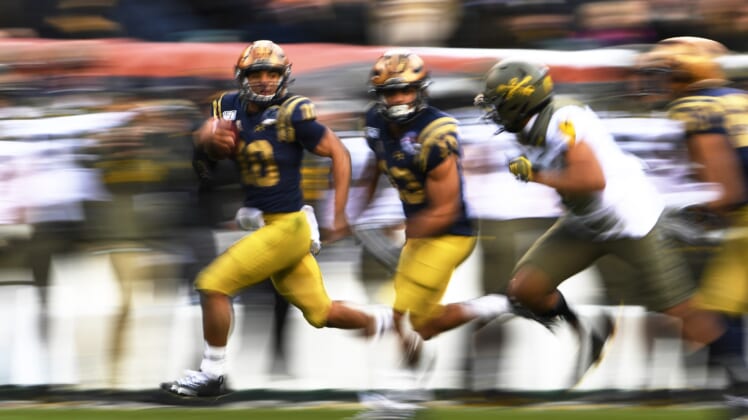 The Midshipmen took the Secretary’s Trophy home with them for the first time in four years after beating the Black Knights in the 120th Army-Navy Game Saturday.

Army opened the game strong, scoring the game’s first touchdown to go up 7-0 in the first quarter. However, No. 23 Navy quickly tied the game and then took it over with a dominant final three quarters. All told, Navy won 31-7 over Army Saturday.

With the Army-Navy Game behind us, we’re looking at the biggest winners and losers from the action.

Coming into Saturday’s Army-Navy Game, Navy quarterback Malcolm Perry was by far the most recognizable player for both teams on a national level. He’s been making highlight reel-worthy plays (like this) all season long and has been one of the best players in Navy history.

As he’s done in previous games against Army, Perry didn’t waste a ton of time roasting the Black Knights. His 55-yard ankle-breaking touchdown in the second quarter was the first of many highlights and broke the game open for Navy.

Perry also is now a record-holder for the most rushing yards in a single Army-Navy Game.

The senior quarterback would finish Saturday’s game with an absurd 302 yards and two touchdowns on 29 carries to spark the huge victory for the Midshipmen and cap off his career in this series in style.

Along the way, Perry became the all-time leading rusher in Navy history.

Junior quarterback Christian Anderson led an impressive 18-play drive that spanned 78 yards and took over 10 minutes off the clock in the first quarter. Then, he capped the drive off with this touchdown to put Army up:

Navy quickly answered with a touchdown of its own, and after that Anderson went cold, as did the entire Army offense.

Overwhelmed at the line of scrimmage, the quarterback managed 56 yards on 21 carries and completed 2-of-4 passes for 18 yards in a tough outing overall.

Coming into this game with 14 touchdowns already from scrimmage despite being option No. 2 on the team’s offense, Navy fullback Jamale Carothers continued to make his reps count Saturday.

Carothers was also the beneficiary of a gorgeous touchdown throw from Chance Warren on Navy’s version of the “Philly Special,” which put the Midshipmen up 14-7 at the half (watch here).

Early on, it looked like Arik Smith and Co. were locked in and ready to slow down Navy’s incredible rushing attack. Then, Malcolm Perry happened early in the second quarter.

From then on the Midshipmen simply rolled over their rival with a dominant performance up front by the offensive line and continued excellence from Navy’s backfield.

All told, Navy racked up 395 yards and three touchdowns on the ground against Army’s defense.

Navy linebacker Jacob Springer was one of the players we highlighted in our preview of the 120th Army-Navy Game. He led the team in tackles for loss and sacks leading up to Saturday’s game, and he continued to be an impact player behind the line in this game as well.

Springer was responsible for one of Navy’s two sacks, and he had two tackles behind the line while tallying eight tackles total. Just a phenomenal performance from the junior linebacker.