Winners and losers from 2018 Pro Bowl 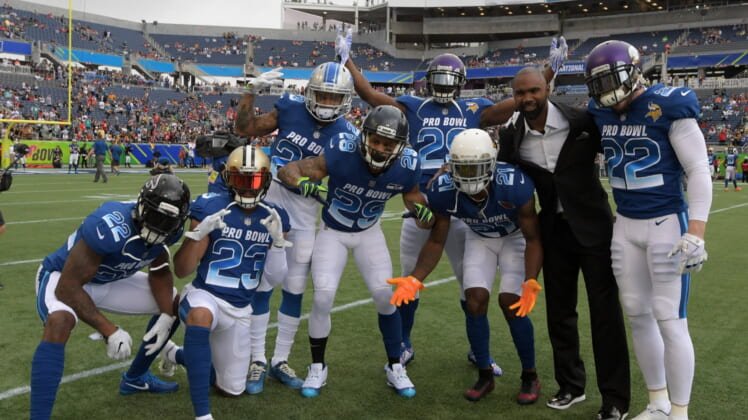 The 2018 Pro Bowl is in the books, and it offered fans at least a dab of excitement. Though, the best thing that happened Sunday had nothing to do with the game itself.

Defensive players made the biggest highlights until the very end, and one of the best players in the game was ironically not even invited until he made it in as a last-minute replacement.

After the final whistle, the AFC claimed victory over the NFC by the score of 24-23.

First, it was a big hit that put this Tampa Bay Buccaneers linebacker on our radar. He combined with Minnesota Vikings defensive lineman Linval Joseph to literally decleat Indianapolis Colts tight end Jack Doyle, and it was glorious.

Then in the second quarter, Alexander was the man who forced Tyreek Hill to fumble on a punt return in the driving rain.

Alexander ended up making six tackles as well, tying Deion Jones for the lead on the NFC side.

First off, Brown had a chance to make a huge play early as a passer. He had Keenan Allen open on the left sideline but floated his pass, allowing Harrison Smith to arrive and break up the pass. Granted, this is total nit-picking by yours truly, but a better pass would have resulted in a big play.

The big reason Brown made this list as a loser, however, is that he really wasn’t able to do anything of consequence as a receiver. What’s especially baffling about this is that he played with his quarterback, Ben Roethlisberger. All told, Brown finished with one catches for just three yards and no touchdowns on five targets.

Perhaps Brown’s calf was still bothering him a bit, because he certainly wasn’t on his game.

Winner: Patrick Peterson with a pair of picks

The AFC quarterbacks in general had a rough game, but a lot of that had to do with a certain cornerback who normally resides in the Arizona desert. Peterson was superb. He reeled in two interceptions and was a thorn in the side of AFC receivers all game long.

His first interception was huge for the NFC team, as it occurred in the end zone near the end of the first half.

Then in the fourth quarter, Peterson picked Derek Carr’s pocket by trailing his receiver perfectly on a deep route down the right sideline. He made an athletic catch to haul it in fighting with Keenan Allen.

Peterson's second INT of the #ProBowl!

If not for the late-game heroics of Delanie Walker, Peterson would have likely won MVP honors. Instead, he’ll have to settle for half as much money as he would have gotten if he won, and the satisfaction of having won his individual battles when he had his chances.

Loser: UCF’s moment in the sunshine did not go according to plan

The city of Orlando is home to the UCF Knights, the self-proclaimed national champions of the 2017 college football season. To commemorate the team’s perfect 13-0 campaign, the Pro Bowl carved out time in between the first and second quarter to to shine a light on the achievement.

Only, instead of sunshine, Mother Nature served up a heaping portion of moisture, literally raining on UCF’s parade.

Just like the College Football Playoff selection committee did all year long, the universe was against the Knights on this day. Which is just a shame. They deserved better, all year long.

Winner: Looks like Harrison Smith really did deserve Pro Bowl nod, after all

It was laughable when Smith wasn’t invited to the Pro Bowl. This is a First-team All Pro who was, by far, the best safety in the NFL during the 2017 season. Yet because the Pro Bowl is more of a popularity contest than anything else, he didn’t get in. Ultimately he made it to Orlando due to an injury to Landon Collins, and he made the most of his chance to shine.

Smith hauled in the interception thrown by Big Ben and returned it 79 yards for six. He also broke up Antonio Brown’s trick-play pass and was in on a number of plays on the back end. He’s in his prime right now and is clearly the best safety in the league. It was nice that he was able to showcase his skills Sunday, even though fans didn’t think enough of him to vote him onto the team in the first place.

Loser: What’s the point of even trying to run?

Okay, we totally get the why. The officials calling Sunday’s game were absolutely intent on making sure nobody got hurt in the trenches. So whenever any running back got a couple hands on him, the play was whistled dead.

But with that in mind, what’s the point of even running the ball?

All told, running backs managed to gain just 73 yards in the game on 29 carries — that’s both teams, people — and LeSean McCoy did manage to score on the ground once. Still, it’s just pointless to continue with the charade. Protecting players is absolutely paramount. So just get rid of running plays. Period. 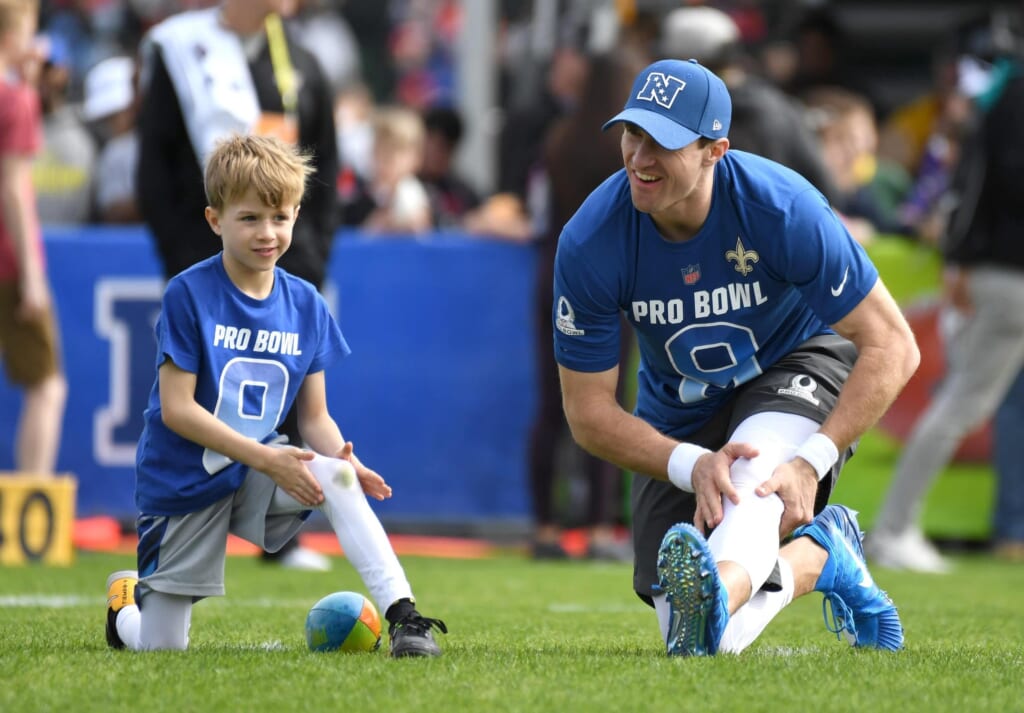 The best moment of the Pro Bowl had nothing to do with the game itself. Brees had his three sons with him on the sidelines, as they had been “hired” to be the NFC’s ball boys for the game. As the oldest son was being interviewed, the two younger ones started in on one another, quite literally beating each other up on the sideline.

It was a hilarious scene that any parent could relate to, and the Twitter reactions were priceless. In the end, Brees went from Pro Bowl quarterback to dad in a heartbeat. He chewed out his youngest, who had actually gone into the field of play during the skirmish, and pointed to the sideline with that angry dad face we all would recognize.

No doubt, Brittany Brees, Drew’s wife, was mortified. But for the rest of us, it was the best thing that happened on Sunday.

It’s also worth noting that Brees had a pretty solid day, passing for 66 yards and the game’s first touchdown before giving way to Russell Wilson and Jared Goff.

Big Ben was one of the best quarterbacks in the NFL during the regular season. But he wasn’t so sharp in the Pro Bowl on Sunday. What’s kind of funny, as we mentioned previously, is that he and Antonio Brown couldn’t get on the same page.

But that’s kind of true overall as it concerns Roethlisberger. He just never got into a groove, finishing with 50 yards on 7-of-13 passing with no touchdowns and a godawful interception, which was returned for a touchdown by Harrison Smith.

This pass never had a chance. It was a total duck, and there was nobody close to Smith when he caught the ball. And, because nobody was interested in tackling the safety, he romped all the way to the house.

On the whole, AFC’s quarterbacks were pretty bad in this game. It most certainly wasn’t what we’ve come to expect, and it led to some rather boring offensive possessions.

Winner: Delanie Walker comes through in the clutch

One of the most underrated players in the entire NFL, Walker shined for the AFC team. He caught both of the team’s touchdown passes in this game, including the game-winner with just 91 seconds remaining on the clock in the fourth quarter.

AFC takes their first lead of the game! #ProBowl

All told, Walker hauled in four passes for 29 yards and the two scores, which were the difference in the game. He also wore some extremely amusing cleats in this game, which prove beyond a shadow of doubt that Walker loves Walker.

In the end, the MVP voters loved Walker, too, as he took home the Offensive MVP hardware for his performance.