Winners and losers from Packers division-clinching victory over the Vikings 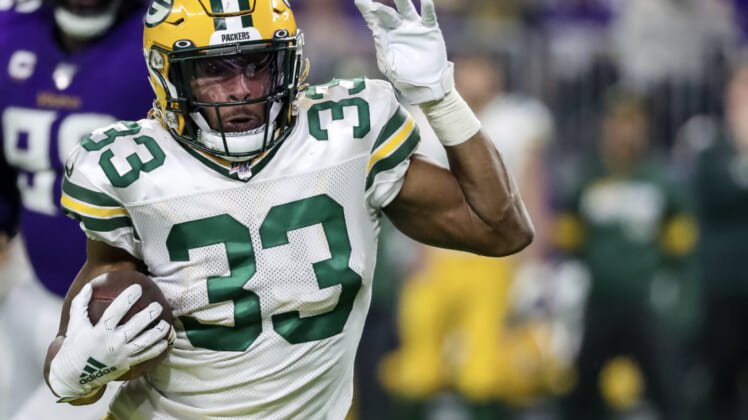 The Green Bay Packers entered Monday night’s road date against the division-rival Minnesota Vikings with an opportunity to clinch the NFC North.

It did not start out too swimmingly for the road team, as Aaron Jones fumbled on Green Bay’s first possession.

Despite this, Green Bay was able to lean on a tremendous performance from its pass rush and an equally stellar outing from star No. 1 receiver Davante Adams in an 23-10 win over the Vikings.

In doing so, Green Bay wrapped up the division and remained alive for home-field advantage throughout the playoffs. For the Vikings, this loss means that they will be the sixth seed.

Here are the biggest winners and losers from this huge road victory for the Packers on the final “Monday Night Football” game of the season.

Adams simply owns the Vikings. It’s been the case for some time now. We saw it back in Week 2 when he caught 7-of-9 targets for 106 yards in a Packers win over Minnesota.

That did not change Monday night. Picking on a struggling Xavier Rhodes throughout the game, Adams hauled in 13 passes for 116 yards. He came through big time when Aaron Rodgers needed it. Seven of Adams’ receptions moved the chains.

This is what we’d call coming up big. And it must have Green Bay excited about the team’s prospects heading into the playoffs. This Rodgers-to-Adams connection has been heating up. Monday night’s game was yet another example.

A game that saw his Vikings force a shocking three Packers turnovers in the first half also included Cousins stinking up the joint in Minneapolis. He was downright atrocious when it came to accuracy, including missing terribly on an important fourth down pass to Adam Thielen late in the second quarter.

Cousins finished the evening having completed 16-of-31 passes for 82 net passing yards with a sole touchdown pass to Stefon Diggs. Equally as important, Cousins just could not do anything facing a relentless Packers pass rush.

Now 0-9 in his career on “Monday Night Football,” Cousins came up small on the grandest of regular-season stages once again. One has to wonder if this is now going to translate to the playoffs.

Smith has to go down as one of the best free-agent signings in recent Packers history. The former Baltimore Ravens star entered Week 16 having put up 30 quarterback hits and 10 sacks. He just put up his best performance of his career.

That included Smith tallying five quarterback hits and 3.5 sacks, dominating a lackluster Vikings offensive line in the process. It’s this type of ability from out on the edge that the Packers had been missing. And it made a world of difference Monday night.

This one call seemed to doom the Vikings in a big way. Not only did Zimmer decide to punt from his own 45 on fourth-and-short, the team called a timeout only to give the ball away via said punt mere seconds later.

The combination of bad clock management and conservative play calling impacted Minnesota in a big way. Packers star running back Aaron Jones then put the game on ice a short while later with a long touchdown run. Just a horrible moment for Zimmer from an in-game coaching perspective.

Despite losing a fumble early in the game, the Packers decided to stick with one of their most dangerous offensive weapons throughout the game. It paid off big time with Jones scoring two touchdowns. That included a 56-yarder to put the game and the division on ice.

Jones has been absolutely exceptional this season. He’s been great on the ground and through the air. That came out in droves Monday night when Green Bay needed it the most.

In the end, Jones gained 154 rushing yards on 23 attempts. If he can provide this type of balance once the playoffs come calling, it’s going to make these Packers dangerous.

Burnt toast. That’s the best way to describe what Rhodes has been this season for Minnesota. The former Pro Bowler entered Week 16 having yielded a 126 quarterback rating when targeted this season.

It did not get much better against Davante Adams and the Packers Monday night. As the primary guy on Adams, Rhodes was the main culprit in allowing Green Bay’s No. 1 receiver to catch 13-of-16 targets in a game that Aaron Rodgers struggled throwing to other players.

This is going to be a major issue for the Vikings moving forward into the playoffs. They simply can’t rely on Rhodes any more. In fact, it might be time to bench the veteran.