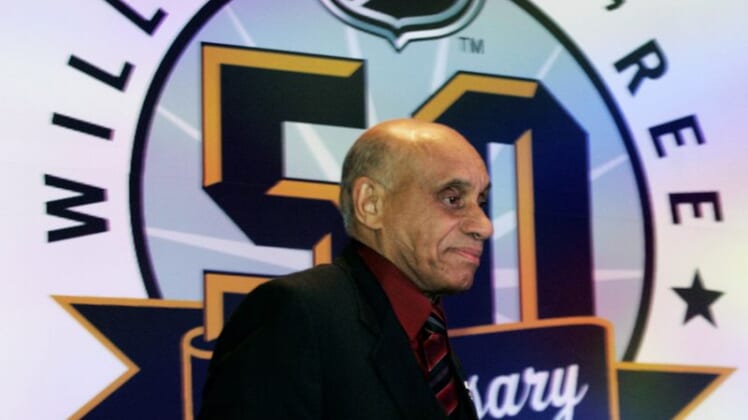 FILE PHOTO: First black hockey player Willie O’Ree stands on stage in front of a banner after a luncheon honoring O’Ree’s 50th anniversary debut in the NHL in Atlanta.

Willie O’Ree, who in 1958 became the first Black player to feature in the National Hockey League, will have his No. 22 jersey retired by the Boston Bruins, the team said on Tuesday.

O’Ree, who entered the NHL a decade after Jackie Robinson broke the color barrier in baseball, faced racial slurs when he made his debut with the Bruins but paved the way for players of diverse ethnic backgrounds.

“Throughout the history of the National Hockey League, there have been very few individuals that have had such a profound impact on the league and its culture than Willie O’Ree,” said Bruins CEO Charlie Jacobs.

“After breaking the color barrier as a Boston Bruin in 1958 and eventually retiring from professional hockey in 1979, Willie became the ultimate ambassador for improving diversity and inclusion within the game of hockey.

“The entire hockey world is forever indebted to Willie for all that he has done, and continues to do, for the sport. We are incredibly proud to retire Willie’s number and cement his legacy as one of Boston’s greatest athletes.”

O’Ree, who had a long career in the minors, played 45 games in the NHL, scoring four goals with 10 assists. Since 1998, he has worked for the NHL as a Diversity Ambassador.

The Bruins said the 85-year-old O’Ree, who was inducted into the Hockey Hall of Fame Class in 2018 as part of the “Builder” category, will have his number retired ahead of the team’s Feb. 18 game against the New Jersey Devils.