Will Ben Roethlisberger’s regression lead to doom for the Steelers?

Through the first quarter of the 2017 season, Pittsburgh Steelers signal caller Ben Roethlisberger simply hasn’t been the same player. It might not show in the team’s AFC North-best 3-1 record, but Big Ben’s regression has been more than eye-opening.

Heck, it might not even show up in the basic stats. Roethlisberger is completing 63 percent of his passes with six touchdowns and two interceptions. He’s also on pace to put up over 3,800 passing yards for an offense that ranks in the middle of the pack in points scored.

But that right there is the primary issue here. Pittsburgh boasts two of the best skill-position players in the NFL. In fact, an argument could be made that Le’Veon Bell is the best all-around running back in the game with Antonio Brown acting the part of the NFL’s best receiver. If that’s the case, how in the world is Pittsburgh ranked in the bottom half of the NFL in both points scored and yards gained?

It’s really simple. Big Ben has struggled pushing the ball down the field this season.

That’s just pathetic. It also comes with both Brown and Martavis Bryant presenting Big Ben with the targets necessary to stretch the field. Roethlisberger ranks 23rd among regular starters at just 6.8 yards per attempt. For a quarterback that has not averaged less than 7.3 yards over the past eight seasons, that’s definitely major regression right there.

And the impact is being felt in more ways than one.

QBs with the lowest % of play-action passes this year:

As you can see, Roethlisberger is not even having success utilizing the play-action with a dynamic Le’Veon Bell behind him in the backfield. Sure a lot of that could be scheme, but it also points to regression in this aspect. The future Hall of Famer boasted an absurd 110.5 quarterback rating off the play-action pass last season. That was actually down from a 116.3 mark the previous season.

In reality, it’s been nothing more than dump-off passes and intermediate shots for Big Ben through the first quarter of the season. When not targeting Brown on the season, Roethlisberger is averaging less than 10 yards per completion. For his part, Brown is accounting for 41 percent of Big Ben’s passing yards on the year.

We can’t really blame scheme or a lackluster offensive line for this performance. Despite being as immobile as they come, Roethlisberger has been sacked just seven times in four games. He’s also being hit at a relatively low clip of 12.9 percent. This tells us a story of an offensive line that’s getting the job done. 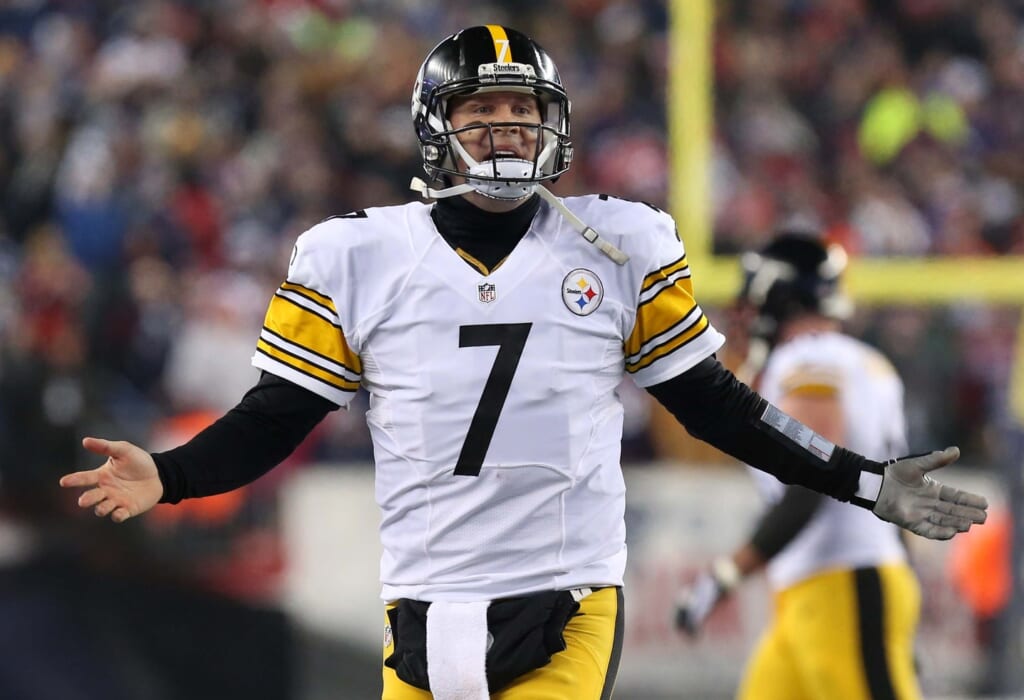 The real issue here is Big Ben’s inability to get the ball to his playmakers down the field. Nine total plays of 20-plus yards through the passing game, five of which have come with receivers racking up yards after the catch.

Pittsburgh’s calling card over the past several seasons has been the big play. Last season saw its passing offense rank fifth in the NFL with 64 plays of 20-plus yards. It’s on pace for just 36 this year.

Short of Roethlisberger somehow improving in this category, it’s hard to imagine the Steelers advancing far in the playoffs. And at 35 years old, we’re looking at regression that seems to be more of a pattern. That in and of itself is hard to overcome.

With games coming up against two of the top-three pass defenses in the NFL (Jacksonville, Cincinnati) over the next three weeks, we will acquire a further understanding of where Big Ben stands. But for now, those in Pittsburgh should be concerned.