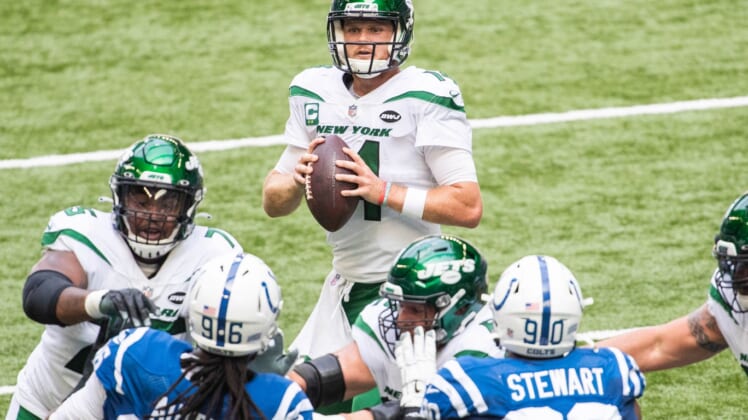 New York Jets head coach Adam Gase is on the verge of ruining former top-three pick Sam Darnold. The lack of weapons surrounding Darnold was a big deal leading up to the start of the 2020 NFL season.

Through the first two-plus weeks, that has not changed. In fact, wide receivers Jamison Crowder and Breshad Perriman were sidelined for Sunday’s game against the Indianapolis Colts.

It impacted the third-year quarterback in a big way.

That started with a pick-six into the hands of former Pro Bowl cornerback Xavier Rhodes to open the game.

We can blame Gase all we want for Darnold’s struggles. But that’s just a horrible throw.

With New York down 24-7 late in the third quarter, Darnold was once again victimized by a pick-six. This time, into the waiting hands of T.J. Carrie.

Inaccurate. Late to the outside. You name it, Darnold’s rookie-level mistakes are coming back to haunt the Jets in a big way. That throw is just not acceptable for a quarterback in his third NFL season.

However, it is to be expected with the likes of Braxton Berrios and Kalen Ballage acting as Darnold’s top pass catchers on Sunday.