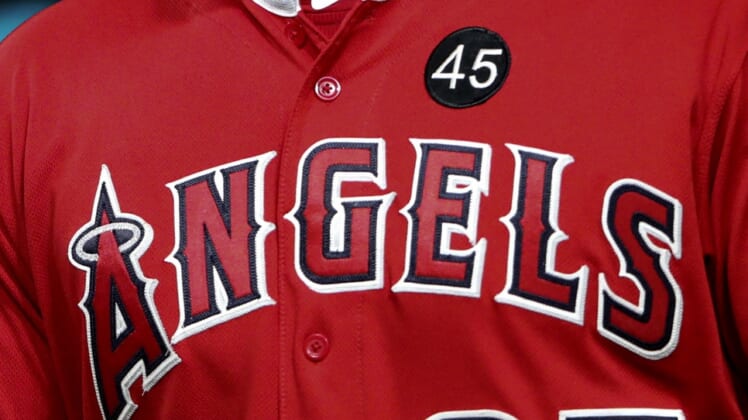 In their first game back home since the tragic passing of Tyler Skaggs, the Los Angeles Angels honored their fallen friend and teammate at Angel Stadium with a moving pre-game ceremony before their game against the Seattle Mariners.

Before the Angels took the field all dressed wearing Skaggs’ No. 45 jersey, the team played a video honoring Skaggs and placed his framed uniform behind the pitcher’s mound. The team then held a 45-second moment of silence to honor him.

Skaggs’ mom, brother, stepdad and wife walked onto the field before the game. His mother wrote her son’s initials on the pitcher’s mound then threw a strike to Angels pitcher Andrew Heaney.

In the weeks following the 27-year-old’s death, tributes have poured in across baseball to honor a lost friend and peer.

During the 2019 All-Star Game, Mike Trout and Tommy La Stella wore the No. 45 in tribute to their teammate. Heaney, who was best friends with Skaggs, honored him by throwing Skaggs’ signature overhand curveball during a game.

Fans have also made incredible tributes to Skaggs with a wonderful banner and a beautiful mural in Venice Beach.