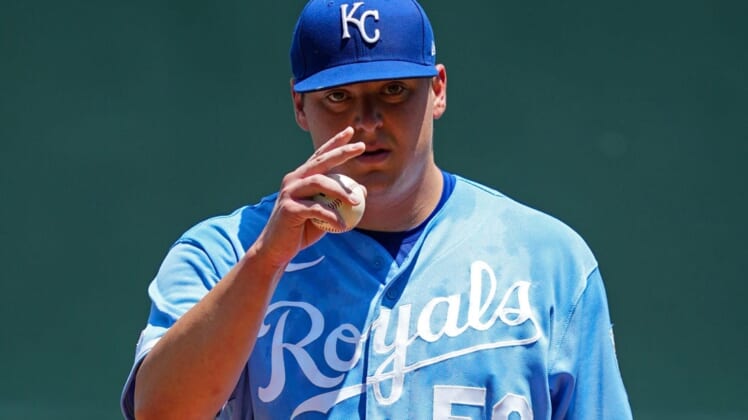 Vinnie Pasquantino hit his first Kauffman Stadium home run as the Royals defeated the Detroit Tigers 3-1 in the first game of a day/night doubleheader Monday afternoon in Kansas City.

Pasquantino’s second home run of the season was also his second against Tigers starter Michael Pineda.

Brad Keller (5-9) earned the victory with seven stellar innings, earning his fourth win in his last five starts. He allowed one run on just three hits with one walk and eight strikeouts.

Scott Barlow picked up his 14th save in 16 chances.

Pineda (2-4) took the loss, giving up three runs (two earned) on seven hits in 5 1/3 innings. He struck out two and walked none.

The Royals were playing their first game without Whit Merrifield in the lineup since June 24, 2018 (553 games). It snapped the longest consecutive-games streak in Royals history and the longest in the majors since Miguel Tejada played in 1,152 straight games from 2000-07. Merrifield exited Sunday’ game with right toe discomfort.

Both pitchers started as hot as the temperature in Kansas City, which was 93 degrees and climbing at first pitch.

Keller struck out four in the first two innings, while Pineda gave up only a broken-bat single by Bobby Witt Jr. through three innings.

In the fourth, Pasquantino turned on an 89-mph fastball and sent it 400 feet into the bullpen in right.

The Tigers tied it in the sixth. Riley Greene led off with a single. He went to second on a slow roller and advanced to third on a single by Harold Castro. He scored on a wild pitch when Miguel Cabrera struck out.

Pasquantino answered with an RBI single in the bottom of the inning. Witt stroked a one-out single, then stole his second base of the game and scored on Pasquantino’s opposite-field hit. Emmanuel Rivera followed with a single, ending the day for Pineda.

The Royals added an unearned run when shortstop Javier Baez threw wild to first on a routine groundout by Cam Gallagher, which scored Pasquantino.