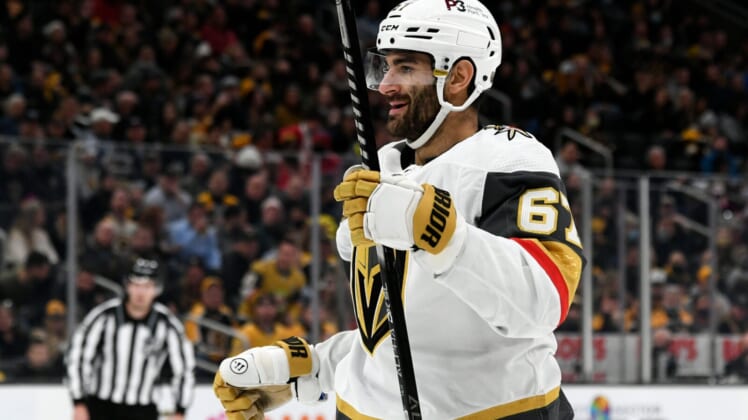 The Vegas Golden Knights faced off against a weak New Jersey Devils team on Thursday night and managed to win 5-3. The victory was powered by the depth players on the Golden Knights as Dylan Coghlan and William Carrier scored their first two goals of the game.

The Devils have scored two goals or less in eight of their last eleven games and have won just two of those games. The Golden Knights added to their losing streak Thursday evening as the Devils struggled to get much offense going after Jack Hughes scored an early goal.

Robin Lehner made a big stop on Jimmy Vesey in the third period. The Golden Knights were leading 4-2 and had a power play but Vesey managed to break the other way and get a prime scoring opportunity. Lehner was there to force the miss and keep the Golden Knights multiple-goal lead, but later in that same power play, Vesey would manage to score after a puck bounced off of him into the net.

There was a scrap late in the game as emotions boiled over. Alex Pietrangelo flipped the puck out of the zone just as Mason Geertsen, a defenseman that was lined up at winger, started a scrap. This led to a few scuffles with just 15 seconds left as the Golden Knights took offense to Geertsen’s actions. Robin Lehner was thrown out of the game so Laurent Brossoit took his spot for the last few seconds.

Shea Theodore missed tonight’s game due to illness but it’s not believed to be related to COVID-19. With an outbreak continuing around the league, the Golden Knights have been lucky enough so far to not have had too many cases.

They won this game despite allowing the first goal to recent first overall draft selection Jack Hughes just over a minute into the game. After that early blunder, the Golden Knights tightened up and managed to tie the game not much later on a power play goal from Dylan Coghlan.

While the Devils did score two goals in the third period to make this game close, the Golden Knights were firmly in control. The Devils third goal was lucky as it took a weird bounce off of Vesey in front before rolling into the net.

The trios dominant play may cause fans and opponents to forget about their second line but that would be a grave mistake. The “Misfit Line” of Reilly Smith, William Karlsson, and Jonathan Marchessault continues to contribute no matter what.

They combined for a pretty goal in the third period tonight that doubled the Golden Knights lead to two. It was William Karlsson that found the back of the net with a perfectly placed shot on the rush.

The Golden Knights entered the third period only up by one goal but controlling play. In the NHL, it’s never a good idea to let your opponents hang around and when the Golden Knights got a power play opportunity early in the period, it seemed as if they were going to extend their lead.

However, the Devils managed to kill that penalty which kept them within one and their comeback hopes alive. That was until the Golden Knights scored two goals in rapid succession to put this game away for good. They smelt blood and pounced on the Devils aggressively.

The Golden Knights play their next game Friday against the New York Rangers. The puck drops for that game at 4 PM Pacific Time as the Golden Knights are on the road at Madison Square Garden.