USWNT qualifies for 2024 Olympics with victory over Canada 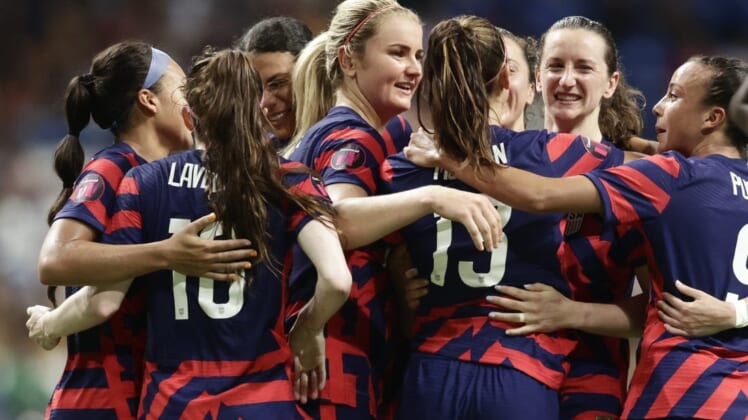 Alex Morgan scored on a penalty kick in the 78th minute as the U.S. women’s national team qualified for the 2024 Olympics by defeating Canada 1-0 on Monday night in the final of the CONCACAF W Championship in Guadalupe, Mexico.

It was Morgan’s pass to Rose Lavelle that led to defender Allysha Chapman clipping Lavelle on the right side of the box. Morgan then stepped to the spot to score her 118th international goal in her 196th game.

Alyssa Naeher made five saves for the U.S.

Canada will play the tourney’s third-place team, Jamaica, in a September 2023 playoff to determine CONCACAF’S second representative in the Paris Olympics.

The U.S., Canada, Jamaica and Costa Rica had already qualified for the 2023 World Cup co-hosted by Australia and New Zealand by advancing to the W Championship semifinals. The U.S. is the two-time defending World Cup champion.

In the most recent U.S.-Canada match in August 2021, the Canadians won 1-0 in the semifinal of the Tokyo Olympics en route to winning the gold medal.

Each team entered the final with four wins, all by shutouts, and there was no separation in the first half on the score board despite the U.S. leading in shots and shots on target.

In fact, Canada didn’t have a shot attempt in the final 25 minutes leading to the break and its only shots on goal came in the sixth and seventh minutes by Nichelle Price. Both were handled easily by Naeher.

Kailen Sheridan kept the Canadians in the match. She stopped Mallory Pugh’s shot to the near post just 45 seconds after the opening kickoff and made a diving save to her right on Pugh in the 31st minute. In the 45th minute, she made a point-blank save of Sophia Smith’s right-footed shot.

Sheridan finished with five saves in the match.

The U.S. outshot Canada 17-11, posting six shots on target to the Canadians’ five.