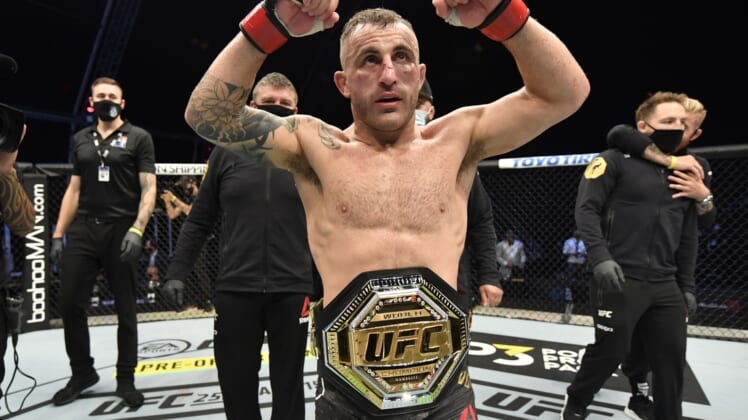 The UFC’s relentless expansion to near-weekly events can leave longtime fans yearning for the day when a mere handful of shows meant every card was deep in world-class talent.

UFC 266 is looking like one of those throwback nights.

Saturday night’s pay-per-view event at T-Mobile Arena in Las Vegas features not just a pair of title fights atop the bill, but one of the longest-anticipated rematches in mixed martial arts history.

The event is topped by a featherweight title fight, as Australia’s Alexander Volkanovski (22-1) puts his belt on the line against Torrance, Calif.’s Brian Ortega (15-1).

Volkanovski will make his second title defense and puts a 19-fight winning streak on the line as well. Ortega is 7-1 in the UFC, with his only blemish coming in a challenge against then-champ Max Holloway in December 2018.

With both preferring the hard-nosed, high-volume approach, this seems to come down to a battle of wills.

The co-feature bout is a women’s flyweight title matchup. Valentina Shevchenko (21-3), of Kyrgyzstan and Las Vegas, has reached the point in her career where her dominance is the draw, and it’s news if someone makes her sweat. Her opponent in her sixth title defense is Houston’s Lauren Murphy (15-4), a plucky underdog who rides a five-fight winning streak into her big opportunity.

Related: All the UFC news and rumors that are fit to print at MixedMartialArts.com

All of this is preceded by a bout 17 years in the making, as the legendary Nick Diaz (26-9) of Stockton, Calif., returns from a near-seven-year absence to take on former UFC welterweight champion Robbie Lawler (28-15) of Coconut Creek, Fla., in a middleweight fight.

At UFC 47 in 2004, Lawler was hyped as a future star, but the then-unheralded Diaz face-planted him with a memorable second-round knockout. Diaz went on to become one of the game’s biggest stars, while Lawler would wash out of the UFC before returning years later and finally becoming champion in 2014.